"How to Blame Your Dragon" 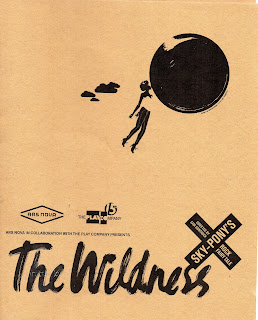 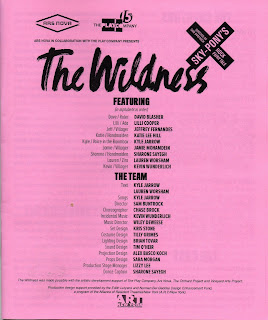 There’s stuff to be wild about in THE WILDNESS: SKY-PONY’S ROCK FAIRY TALE, a musical collaboration of Ars Nova and The Play Company at the former’s W. 54th Street venue. And there’s also stuff not to be so wild about. But, all told, this evening of semi-immersive theatre—in which you’re squeezed into Ars Nova’s intimate venue on stools or couches on either side of a planked wooden runway, with TVs, projections, musicians, and lighting instruments all around and practically up your kazoo—is worth a visit, especially if you belong to the target audience of millennials who lapped it up like theatre manna when I attended.
Stuff to be wild about includes the doll-faced, awesomely gifted Lauren Worsham (A Gentleman’s Guide to Love and Murder), who co-wrote the book with her talented, white-spectacled husband, Kyle Jarrow; Mr. Jarrow, who appears in the show as well, wrote the music and lyrics. Both belong to the collaborative, Brooklyn-based, indie-pop band Sky-Pony, known for its highly theatrical performances.


Ms. Worsham, who’s very visibly pregnant, makes her beautiful belly a prominent part of her performance. With all the energy she expends—acting, singing, and dancing for 100 minutes—you hold your breath there won’t be an unexpected arrival. (Talk about an actor’s bravery! How about the chance you’ll give birth in mid-performance?)
The “frame” story is about a group of aspiring New York artists who get together every year for a ritualized drinking party “to purge our doubts and fears.” The idea came five years earlier from a buddy called Michael. Over the years, the ritual supposedly evolved into the show we’re about to see, which is a 12-part fairytale about villagers frightened to ever leave their village and enter the neighboring forest, called the Wildness, where dragons and other evils are thought to dwell. The bearded, six-foot, tutu-and “crazy sneaker”-wearing, Michael, however, has vanished (perhaps he killed himself), but they go on without him with his sister Lilli (the very special Lilli Cooper) taking his place (he presumably performed in drag).
In the fairytale, Ada (Ms. Cooper), daughter of the village Ruler (cellist David Blasher), one day dares to venture forth into the Wildness to see just what it is that’s out there; accompanying her is her devoted handmaiden, Zira (Ms. Worsham). The journey is necessitated by the town’s spring water having turned toxic (an irritating distraction in the light of what’s happening in Flint, Michigan) and the need to seek a solution despite the potential dangers in the Wildness. There’s also some mumbo jumbo about a prophecy and its relationship to the town’s loss of faith. The moral, aimed at millennials, has to do with the need to one day shed our doubts and make an analogous journey in our own lives. Eventually, frame and fairytale begin to blend.
Audience members take part occasionally, rising and sitting on command, declaring “You’re not alone” to someone’s confessions (whimsically called “overshares”), receiving candy, and blindfolding themselves when asked to do so. A couple of volunteers (the “Brave Ones”) also participate in the “overshares,” expressing doubts about their personal issues. These confessions are the show’s most annoyingly pretentious feature, especially when the actors offer their characters’ own in stumbling, pseudo-naturalistic, and thus more obviously artificial fashion. The actors, you see, play both fictionalized versions of themselves (using their real first names) and the characters in the fairytale. Metatheatre isn’t always beta theatre.
Aside from those sham moments, which drag things down, the show’s been directed with driving energy by Sam Buntrock and imaginatively choreographed by Chase Brock to fit the elongated stage, perhaps four feet wide, designed by Kris Stone. Brian Tovar’s fabulous kaleidoscope of rock-concert- style lighting offers exceptional visual interest.
Whatever tolerance you may have for quirky fairytale musicals bearing moralistic truths (I don’t have much, I confess), THE WILDNESS has enough truly well-performed, tunefully delightful, rhythmically magnetic music to keep you with it. Still, when a tape of Michael’s voice was played singing the following lines at the end, I can’t say I felt much better.