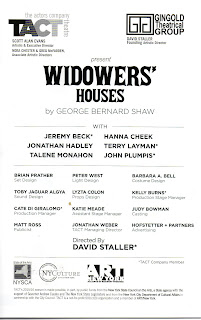 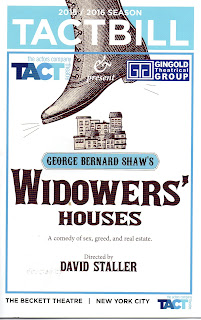 George Bernard Shaw’s first play, WIDOWERS’ HOUSES (on which William Archer collaborated before dropping out) is being given a rare—and happily welcome—revival by TACT (The Actors Company) under Shaw specialist David Staller’s spirited direction. Written in 1885, published in 1888, and first produced (two performances at a private theatre) in 1892, it was initially derided for favoring polemics over dramaturgy. Shaw, a Socialist, saw the play as a way to advance his political ambitions, saying he had written it “to induce people to vote on the Progressive side at the next County Council election in London.”

The volume he published it in contained two other plays, all lumped by him under the title of Unpleasant Plays because of the dark social issues they sought to address (he later published a volume of Pleasant Plays). In performance, WIDOWERS’ HOUSES, for all its unpleasant concerns, proves to be a pleasant work of theatre; Shavians should be warned that Mr. Staller (of the Gingold Theatrical Group, which co-produced) has taken considerable liberties in editing the dialogue--cutting, revising, and even adding. This is surely meant to make the play briefer and more accessible although Shaw--notoriously rigid about having his plays toyed with--would have done to Mr. Staller much worse than what the ingenue does to her maid in the play.
The unpleasant theme is slum landlordism, a problem as topical today as it was when the play was written. Amazingly, the day after I saw it the New York Times published an op-ed by the modern equivalent of a slum landlord under the title “I’m Not Evil. I’m a Landlord,” defending his practice in terms that might have been composed by Sartorius, the fabulously wealthy landlord in WIDOWERS’ HOUSES. Shaw, for all his anger, gives his non-villainous “villain” considerable opportunity to rationalize why he screws whatever money he can out of his indigent tenants. The poor are ruthlessly demonized by the money-rotted parvenu, whose snobbishness (and that of his daughter) holds those beneath him in contempt.
WIDOWERS’ HOUSES is in three acts (played as two in this two-hour production). In the first, young Dr. Harry Trench (Jeremy Beck), earnest and straightforward, is vacationing in Germany at a hotel at Remagen on the Rhine with his pompous friend, William De Burgh Cokane (Jonathan Hadley), given to spouting phrases in mutilated French. Harry encounters the pretty young thing, Blanche Sartorius (Talene Monahon), touring Europe with her beloved father, Sartorius (Terry Layman); the couple fall in love and become engaged.
In act two, set in the Sartorius family’s London home, the slumlord fires his lowly rent collector, Lickcheese (John Plumpis), despite the latter’s dedicated service, for being too soft on the tenants. This leads the abject Lickcheese to beg Harry to intercede on his behalf; he then reveals to Harry and Cokane the harsh nature of Sartorius’s business practices. Harry, disgusted at what he’s learned of how his future father-in-law earns his wealth, insists to Blanche that they will live on his meager 700 pounds a year and not take anything from her father, who wants them to share his riches. The spoiled, petulant Blanche revolts and the couple split up. Harry is set back even further when Sartorius reveals that Harry’s entire income derives from interest earned on mortgaged property owned by Sartorius. He’s shocked to discover that he, too, is a slum landlord, and could not survive without this dirty money.
The third act resolves all problems when Lickcheese returns, having become a smartly dressed rich man and works out a shady business deal with both Sartorius and the disillusioned Harry, who will now be able to marry Blanche. After we’ve seen her display callousness, selfishness, and even physical cruelty toward her maid, Annie (Hanna Cheek), we may seriously doubt the wisdom of this match.
A dark shadow hovers over WIDOWERS’ HOUSES, and, despite its being classed as one of Shaw’s “romantic comedies,” the laughs are subsumed by Shaw’s anger at the social conditions he attacks. But there are many surprises in the way Shaw subverts traditional 19th-century romantic comedies, such as his emphasis on the buying of social position; Blanche’s forthright, erotically charged behavior; her lack of sympathy for the downtrodden; Harry’s moral ambiguity; and the pervasiveness of hypocrisy.  However, there’s considerable energy and sprightliness in Mr. Staller’s adaptation, enough to maintain the semblance of a comic spirit so that the nefarious aspects of the plot and characters retain their entertaining edge. The director’s choice of opening and closing the play with Harry spotlighted on a dark stage to emphasize his ethical dilemma clearly tells us there’s something troubling about the hero’s loss of innocence.
Brian Prather’s unit set of a white framework of pillars and arches serves equally as well for the hotel terrace of act one as for the interiors of acts two and three. However, the upstage curtained hanging showing what seems an architect’s rendering of a massive residence (or official building) remains unchanged through the play. It not only makes no sense for either scene but suggests that the budget was insufficient for a second curtain to reflect a change of scene. A neutral hanging would have been better.
The slender, girlish Ms. Monahon fully embodies Blanche’s willful, defiant, tempestuous, and snooty personality, while Mr. Beck offers a believable panoply of responses to the circumstances affecting him. Mr. Layman is every inch the arrogant, self-satisfied landlord-father, Mr. Hadley is colorfully flamboyant as the parasitic Cokane, and Mr. Plumpis is truthfully obsequious as the beggarly Lickcheese and craftily reptilian when Lickcheese rises in the world. Everyone looks fine in Barbara A. Bell’s turn-of-the-20th-century costumes (the production is set in 1900), the lighting by Peter West is efficient, and Toby Jaguar Algya’s period sound design for the scene breaks (resembling silent movie piano music) adds to the atmosphere.
Compared to Shaw’s better-known works, WIDOWERS’ HOUSES receives few significant productions. This one, however, shows it’s not only pleasurable in its own right (with several characters who would appear in more polished versions in later plays) but that, in the 124 years since it premiered, its relevance has never vanished.