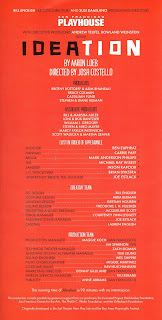 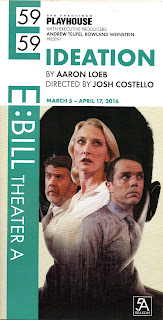 According to one definition, “ideation” means “the formation of ideas or concepts.” In Aaron Loeb’s chillingly fascinating, bitingly clever, black comedy of that name, the ideas or concepts being formulated concern the creation of the means for a top-secret project involving—and here’s my sole spoiler alert— “collection,” “containment,” “liquidation,” and “disposal.”

An American corporate think tank of three top-flight civil and industrial engineers, each with his specialized expertise, has gathered in their company’s white conference room (capably designed by Bill English and lit by Gertjan Houben) with their manager and her new assistant; their mission—to put together, in 90 minutes (the length of the play), a presentation for their C.E.O., J.D., who appears, when necessary, via a vidcon screen we don’t see.
The engineers are the wiseacre Brock (Mark Anderson Phillips); the grounded Texan, Ted (Michael Ray Wisely); and the India-born PhD, Sandeep (Jason Kapoor). Their manager is a beautiful married woman, Hannah (Carrie Paff), who’s having a thing with Sandeep; her supercilious young assistant is Scooter (Ben Euphrat), hired because his father’s on the board.
The ideation process is to have no digital record, with all notes transcribed only on paper and on the large whiteboard attached to the upstage wall. The whiteboard practically becomes a character as countless diagrams and outlines are rapidly scribbled (and erased) on it. A snarky, self-satisfied, even jokey air surrounds the team as it begins its ideation session on the plan, which—despite what seem its unspeakable implications—is being carried out because everyone’s been told it has the humanitarian purpose of saving the world.
As we watch the team dispassionately argue in technobabble over the logistical problems, the potentially horrific consequences of what they’re planning grip our hearts until, finally, one of them—a bit belatedly, one might think—begins to question the project’s morality. Soon, when the project comes under suspicion, the team members, using every ounce of their considerable ability to rationalize outcomes, always via whiteboard diagrams, begin frantically to suspect not only those masterminding the enterprise but each other as well. Every possible hint at collusion or espionage is examined; as their paranoia spirals out of control, they fret not only over the project’s ethics but whether it even exists.
Although it’s been called a psychological thriller, Mr. Loeb’s play leans more toward being a frequently funny and decidedly edgy satire of global corporate power, the self-interested rationalization of ethical dilemmas, the paranoia leading to conspiracy theories, and the impossibility of knowing who to trust and how much (from friends to colleagues to lovers to bosses to the government). Director Josh Costello has coached each of his expert actors to portray believable, intelligent, cocky, sarcastic, yet, in the end, highly vulnerable characters; this is the same troupe that introduced the play under Mr. Costello’s direction at the San Francisco Playhouse in 2013, and their timing and byplay couldn’t be better.
IDEATION creaks a bit here and there, as with the Sandeep-Hannah affair, but, on the whole, is a fast-paced, original, suspenseful, and intellectually satisfying yet consistently accessible contribution. By the way, if you've read this far, the acronym heading this review means: "Crazy Rich Fuckers Do Weird Shit."