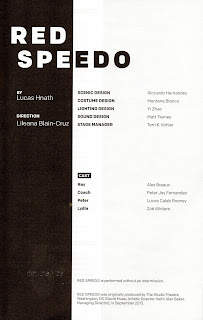 If you’re looking for a topical, thought-provoking play that doesn’t have anything to do with sexual identity, dementia, or race (three of the most common subjects of recent New York shows), seek no further than Lucas Hnath’s RED SPEEDO, in which the ethical whirlpool swirling around sports doping plays a central role. We’re at a time when you can’t open a paper without running into stories about the travails and impact of dope-using star athletes like Maria Sharapova or Jenry Mejia; today’s Times, for example, includes a major piece about the explosive effect the banning of the drug meldonium is having on Russian skaters.
In RED SPEEDO the sport is swimming; in fact, the play takes place on the deck beside an actual pool, or at least one lane of it (Riccardo Hernandez designed the set and Yi Zhao the lighting). The entire front of the stage at the New York Theatre Workshop theatre is occupied by blue water, visible through a glass wall facing the auditorium’s first row; the smell of chlorine pervades the air. Considering the expense and effort required to build this effect, it’s surprising how little it’s used for actual swimming, but there’s a scene toward the end when—dramatically, if not athletically—its presence offers a striking payoff. The principal action takes place on the slender deck, backed by a slightly sloping wall of large gray tiles dominated by a large racing clock.
The athlete is Ray, played swimmingly by Alex Breaux, a slender, strapping, slab of perfectly defined alabaster muscle from whom every discernible ounce of body fat seems to have been shaved (click here to read about his regimen). He wears only a red Speedo throughout and has a large, unattractive, black tattoo of a sea serpent on his back, running from one shoulder all the way down a leg. Ray, who’s preparing for the rapidly approaching Olympic trials, should make Team USA easily, but his trajectory is stopped when a banned substance is found in the club fridge and the coach blames Ray.
When the dialogue begins (after Ray swims a lap), Ray’s brother, Peter (Lucas Caleb Rooney, outstanding), who’s also his lawyer and manager, is on the deck with Ray and Ray’s coach (Peter Jay Hernandez, excellent) delivering to the latter a lengthy, machine gun-like, exposition-packed defense of Ray that sounds as if David Mamet (absent his vulgarity) fed the lines to Mr. Hnath as he wrote it. Every now and then, Ray, crunching carrot sticks, interjects a seemingly air-headed comment. Peter—the quintessential equivocator, with the ruthless desperation of a drowning man—insists the drugs don’t belong to Ray and, with so much at stake, the coach (whom Peter, we’ll learn, would like to replace) should flush them away and let the matter slide.
Ray, however, admits to Peter the drugs are his and argues why he should use them. His specious suggestion that it’s no different than affirmative action (this having to do with his finger length, of all things) gets a laugh but also shows that he and his dodgy brother are cut from the same cloth. (Oddly, while the incident that incites the action doesn’t involve detection of Ray’s doping, it’s hard to ignore the question of how he avoided being found out earlier. And, as a friend points out, it would be impossible for him to escape detection by the Olympics officials, which sort of makes the whole thing a fantasy.)
Money, success, and fame—all crucially important to the characters—stand in the balance. Ray may seem thick at first but, despite his educational weaknesses, reflected in the quirky things he says, he possesses a sharp intelligence. At 25, he knows his options are limited (all he can do is swim) but he’s fully aware of what he must do, not only to win but to promote both his career (a Speedo endorsement!) and his post-career.
Under Lileana Blain-Cruz’s thrusting, if unsubtle, direction, RED SPEEDO’S intermissionless 80 minutes play out in a series of dynamic scenes delivered mostly at high-testosterone levels, including one between Ray and his former girlfriend, Lydia (Zoë Winters, vibrant), a disgraced former sports therapist from whom he seeks to obtain drugs. None of these ambition-riddled characters is sympathetic, but they’re all rivetingly intense. A distinct air of the theatrical hovers over the hyper-realistic atmosphere as the characters spar in supercharged language. Everything culminates in a brutal, bloody, battle royale with an ambiguous ending; its vivid violence would earn fight choreographer Thomas Schall an award if one existed for such contributions. (I wonder if the actors are getting hazard pay.) Even the annoyingly loud foghorn-like blasts that punctuate the action, created by sound designer Matt Tierney, make the performance seem like a competition.

Like each of Mr. Hnath’s previous plays seen in New York, ISAAC’S EYE, A PUBLIC READING OF AN UNPRODUCED SCREENPLAY ABOUT THE DEATH OF WALT DISNEY, and THE CHRISTIANS, RED SPEEDO is both thematically and theatrically absorbing. It  raises ethical questions of the “what price glory?” type related to how and why athletes use performance-enhancing drugs both to excel and to prolong their careers; it uses these questions, though, more as melodramatic levers than for substantive moral debates. The topicality grabs your attention, and the issues hover as you watch; however, what you get is simply one unrepresentative athlete’s take and not something that will change your mind, one way or the other. The play, in fact, is actually more concerned with the interpersonal relationships of the characters than with its newsworthy subject matter. Still, its dramatic waters are fine and you should definitely consider diving in.