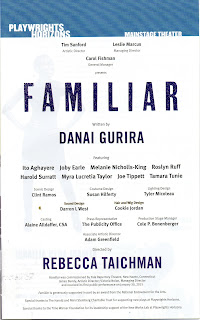 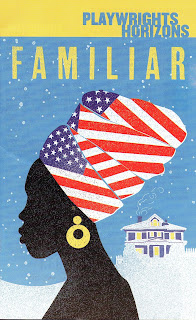 The striking face with the blazing but welcoming eyes on the cover of the February issue of American Theatre magazine belongs to the excitingly talented actress/playwright Danai Gurira. She not only plays a zombie killer on TV’s successful “The Walking Dead” but is the author of the acclaimed ECLIPSED, scheduled to open on Broadway three days after the play covered here, FAMILIAR, opens Off-Broadway at Playwrights Horizons.


Born to American academics in Grinnell, Iowa, and raised from age five in Harare, Zimbabwe’s capital, before returning to the U.S. to study acting at NYU, Ms. Gurira usually concentrates on African issues in plays set on that continent (ECLIPSED takes place in Liberia), but she takes something of a detour from those concerns in FAMILIAR, which premiered a year ago at the Yale Rep with—except for one actor—a different cast. Not that the two-act play isn’t about African issues but, instead of being expressed within an African context, they’re embedded in an often hilarious—and I mean hilarious—domestic drama set in a Minneapolis suburb.
FAMILIAR follows the familiar—perhaps a bit too familiar—well-made play trajectory in which a disparate group of family members gather for the imminent wedding of a daughter. Laughter, tears, anger, and misunderstandings are the components of its dramaturgy. So are the ultimate revelations of long-kept secrets that threaten to turn happiness into sorrow before happiness returns. These latter, in fact, shove the play too sharply in the direction of melodrama, and, while appealing in the way hidden facts about characters we care about always are, nonetheless smack too strongly of dramatic contrivance.
Also familiar is the thematic issue of assimilation presented by immigrants and their children trying to balance the desire to Americanize with the pull of their native culture. But Ms. Gurira deploys these elements with such masterful skill that—assisted by an exceptionally adept cast and spot-on direction by Rebecca Taichman—her play springs to life in such an entertaining way you might—at least momentarily—even conceive of it competing on Broadway with ECLIPSED.
The family in question is a highly educated Zimbabwean-American one; it’s a joy to see such an unfamiliar family on a mainstream stage and to learn of what concerns them on an everyday level. They live in a lovely, book-lined home, both levels of which are beautifully rendered by designer Clint Ramos. It’s the kind of suburban home into which you instantly feel like moving. The patriarch is Donald, called Baba Tendi (Harold Surratt), a lawyer. His every attempt to hang a map of Zimbabwe (a picture of Robert Mugabe in the Yale staging) in place of a decorative painting is countered by the painting being put back again by his wife, Marvelous, called Mai Tendi (Tamara Tunie). Their friction over the map symbolizes the play’s central conflict.
The mid-30s bride is Tendi (Roslyn Ruff), a lawyer, and her groom is Chris (Joby Earle), a white guy with a background in human rights work in Africa. They’re pious Christians and she’s saved her virginity for her wedding night. Her younger sister is Nyasha (Ito Aghayere), a New York-based feng sui consultant and would-be singer just back from a stay in Zimbabwe and preoccupied with reconnecting to her cultural roots.
The other relatives are Marvelous’s younger sister, a geology professor and prospective direct sales entrepreneur named Auntie Margaret or Mai Tongi (Melanie Nicholls-King), and her older sister, Aunt Anne or Mai Carol (Myra Lucretia Taylor), whose domineering presence ignites the principal action. This happens when, at Tendi’s request but to Marvelous’s assimilationist horror, she insists on performing the Zimbabwean bride price ceremony of roora.
There’s one more character, brought in to serve in the ceremony: Chris’s brother, Brad (Joe Tippet), wearing a Ramones t-shirt and a gray wool cap, whose sweet cluelessness in a world he’s totally unfamiliar with leads to some of the play’s biggest laughs. Perhaps the biggest is when he and Nyasha meet cute; that moment, and the circumstances leading up to it, may strain credulity but it’s a great way to bring down the act one curtain. Mr. Tippet’s pitch-perfect, offhandedly natural performance makes it easy to see why he’s a holdover from the Yale production.
The ensemble is, on the whole, excellent, but special kudos go to Ms. Taylor as the indomitable Auntie Anne, whose magisterial presence, once she dons her traditional Zimbabwean garb, would cow even Donald Trump. Ms. Tunie’s Marvelous is impressively commanding but her accent is also the least convincing. Ms. Nicholls-King’s Margaret is colorfully vibrant, Ms. Aghayere’s Nyasha is convincingly determined and vulnerable, Mr. Surratt’s Donald manages to hold back his feelings until his ultimate emotional release, Ms. Ruff’s Tendi is charismatic and truthful, and Mr. Earle’s Chris is appropriately accommodating amidst events he can’t control.

Spirited direction, a fine set, excellent costumes by Susan Hilferty, adept lighting by Tyler Micoleau, and a fine sound design by Darron L West conspire with quality performances to make FAMILIAR, even with its obvious frailties, something with which many definitely will want to become familiar.