"Viagra for the Heart" 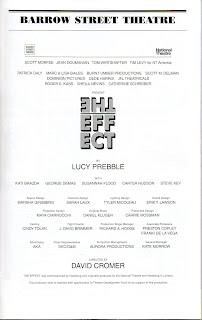 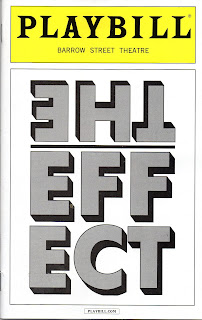 In Lucy Prebble’s The Effect, two characters swallow pills as part of a drug-testing protocol. Audiences viewing this award-winning 2012 play from London’s Royal National Theatre have to swallow a lot as well, although some may find not everything goes down so smoothly. Prebble’s (Enron) two-hour play, reportedly shortened by half an hour or more from its original version, is being given a clinically precise, quietly low-key (sometimes a bit too low-key) staging by David Cromer at Greenwich Village’s Barrow Street Theatre, where he previously offered such notable productions as Our Town and Tribes.

Connie Hall (Susannah Hall) and Tristan Frey (Carter Hudson), neither suffering from depression, are among a dozen participants (we don’t meet the others) who’ve signed up to test the effects of an antidepressant drug, RLU37, intended to increase the brain’s dopamine levels. They’re being paid for a four-week experiment in which they’ve agreed, among other things, not to smoke, not to phone, and not to engage in sex.

Connie, who’s in a relationship with a man, is a psychology grad student interested in learning about these things from the inside; she’s even familiar with the psychological tests in which she’s taking part. Tris is a loosey goosey contrast to her conventional behavior, intending to use his earnings for a backpacking trek. The drug trial is being supervised by Dr. Lorna James (Kati Brazda), an attractive psychiatrist in early middle age. As Prebble’s formulaic scenario would have it, she’s been through an unhappy romantic fling with her medical superior, Dr. Toby Sealey (Steve Key), who represents the Big Pharma drug company running the trials and whose guilt trip is responsible for his having hired Dr. James.
Connie and Tris meet cute when they submit their urine samples; pretty soon, they’re falling crazily in love. As their dosages increase, signaled by projections of how many milligrams they’re taking, so does their attraction. They wonder, though, if it’s natural or drug related. And whether they shouldn’t just accept their feelings, regardless of whether the chemical reaction is biological or pharmacologically induced. Since one of them is getting a placebo, though, knowing who might solve the problem.
Their issues are conveniently contrasted with the private and professional ones of the doctors. They, too, are puzzled about the effect of the drug on their volunteers, Dr. Sealey considering that perhaps what’s being tested as an antidepressant may have the side effect of being “a Viagra for the heart.” The psychiatrists disagree on the efficacy of depression-altering drugs, Dr. James, herself a depressive, being skeptical, Dr. Sealey gung-ho. And what are feelings anyway, we wonder, if they can so simply be reduced to malleable chemical reactions?
In the course of the performance, the drug testing itself comes under scrutiny. When the placebo issue arises, for example, Dr. James gives in and reveals the recipient to one of the lovers who’s been getting it, an act that would immediately discredit the tests; in fact, strict protocols would probably preclude even her from knowing this information. So many protocol-compromising things happen during the play, including the lovers’ constant rule-breaking (sex, phones, etc.), that the trial’s integrity would be blown sky high if anybody ever investigated.


The Effect’s dramaturgy may be strained—especially in act two, which includes a big melodramatic development—but the dialogue is crisp and often humorous, the ideas about multiple subjects (chemistry, pharmacological texts, brains, ethics, love) are interesting, and all the actors give convincing performances, even if their characters aren’t fully developed. Brazda’s Dr. James is briskly professional yet emotionally vulnerable; Key’s Dr. Sealey is appropriately ambitious; and Flood and Carter are believably nuts about each other. Marsha Ginsburg’s sterile hospital setting, nicely lit by Tyler Micoleau, is impressive, and Sarah Laux’s costumes offer the right touch of everyday reality.

Some of The Effect will raise your dopamine levels. It's those side effects you have to worry about.