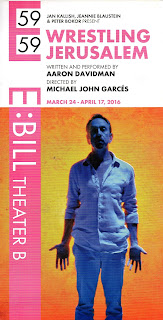 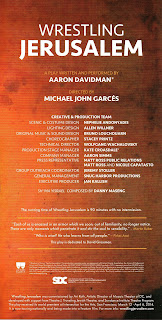 You don’t have to be Jewish to love Wrestling Jerusalem, Aaron Davidman’s wrenching but open-minded 90-minute solo drama about the social, psychological, military, political, and basic human complexities of the Israeli-Palestinian conflict. This powerful piece, which premiered at San Francisco’s Intersection for the Arts in 2014, and is now at 59E59 Theaters, has been seen in a number of American cities and is being made into a feature film. Regardless of who or what you support, AIPAC or J Street, Israelis or Arabs, Jews or Muslims, one state or two, Davidman’s writing and performance will hold your attention and make you think. The expression “tour de force” may be overused but there’s no other way to describe this balanced, if frustrating, exploration of one man’s consideration of the tragic, intractable, and perhaps insurmountable difficulties that have been roiling the Jewish state since it was born in 1948.

Referring to himself as Aaron, the play’s redheaded, goateed actor-writer, a middle-aged man with family roots in Brooklyn’s Brighton Beach, narrates while moving about on sand-colored flooring, with a similarly colored, wrinkled drop behind him (the spare décor is by Nephelie Andonyadis). Under Michael John Garcés’s flawless direction, which makes use of not a single prop, he recounts in his own voice and those of 16 others—Jews, Arabs, Israelis, Americans, Brits, women, men, old, young, religious, and secular—a dizzying panoply of responses to the crisis. Here and there he moves to the rhythms of a Middle Eastern-style dance (Stacey Printz did the choreography) or sings in Hebrew or, for a Muslim prayer, in Arabic. Allen Willner’s lighting, which often casts Aaron’s graceful shadow on the backdrop, accentuates the many dramatic shifts in the narrative; together with the original music and sound design of Bruno Louchouran it perfectly conjures up the required ambiance.

No sooner does the play begin than Aaron bursts into a litany of causes commonly cited as the reasons for Israel’s problems. Saying, “It’s complicated,” he rattles off the 1948 War of Independence (the Catastrophe to the Palestinians), World War I, various massacres perpetrated by Jews or Arabs, the Six Day War, the Yom Kippur War, 1947’s UN Resolution 181, the invasion of Lebanon, the Intifadas, the settlements, the terrorist attacks, the war in or withdrawal from Gaza, the walls, the tunnels, the missiles, Iran, the politicians . . . You quickly get the point.
We soon encounter the widely varying experiences and reflections of the people Aaron spoke to in the Holy Land over the years since his first trip there, in 1992, when he went to study Torah and Hebrew. He talks to people from all walks of life and both sides of the issues; he even crosses the border—its barbed wire reminding him of a concentration camp—into the Palestinian city of Ramallah in the West Bank. (He also visits Hebron and the Dead Sea.) There are many stories to grab you, like an Israeli doctor’s account of the generations of trauma visible in Palestinian children’s eyes, or a rabbi’s potent exposition of the meaning of the Hebrew prayer, “Sh’ma Yisrael Adonai Elohainu Adonai Echad,” which had even this secular Jew on the brink of tears.
There’s much more here to relish and ponder. If anything, the work could probably stand to be a few minutes shorter. Most of what Davidman presents should be familiar to you, but when you hear it in context with so many contrasting and complicated perspectives your heart can’t help but break at the seeming impossibility of an imminent solution.
Here’s a slightly edited list of headline items Aaron presents at one point:

It's complicated, no?
OTHER VIEWPOINTS:
Show-Score