"Remains of the Day" 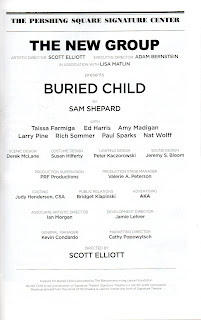 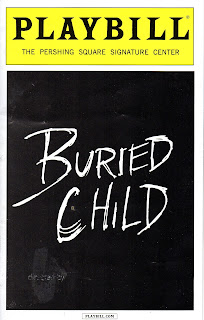 Few plays remain as branded on my brain as the 1979 production at the Lucille Lortel Theatre (to which it moved after opening at Theatre for a New City) of Sam Shepard’s Pulitzer-winning BURIED CHILD. (I missed Steppenwolf’s acclaimed 1996 Broadway revival.) In BURIED CHILD, as in the other plays in Shepard’s “family trilogy” (THE CURSE OF THE STARVING CLASS and TRUE WEST), we saw how families can be cursed, sources not of comfort but of pain and death handed down from one generation to the next. BURIED CHILD’s naturalistic-symbolic picture of an American family in dissolution was both accessible and puzzling; critics ever since have been analyzing it for its meanings. However, if I magically live another 36 years and even more magically keep all my marbles, I doubt I’ll remember much about the uninspired revival now being given by the New Group under Scott Elliott’s direction at the Pershing Square Signature Theatre Center, even though the gifted Ed Harris and Amy Madigan head the cast.

When the audience enters, Dodge (Mr. Harris) is already on stage, sitting on a crummy old couch in the rundown living room of his Midwestern farmhouse (designed by Derek McLane), a baseball cap over the awful haircut one of his demented sons, Bradley, gave him while he slept (another one awaits); now and then he coughs as he stares, not even watching the small TV perched before him. Outside, the rain is coming down. When the house dims and the stage brightens, this smoking, boozing wreck and his piously religious, henpecking wife, Halie (Amy Madigan, too one-note), bicker at length, except she remains offstage. Finally, she appears, dressed neatly in black for an appointment with her minister/lover, Father Dewis (Larry Pine, making the most of his secondary part).

We next meet Dodge’s mentally damaged son, Tilden (Paul Sparks, more dull than creepy), who moved back when something happened that forced him to flee New Mexico, where he lived for 20 years; muddy, and with his arms full of corn, he proceeds to shuck the produce, claiming that the backyard's abundant with the stuff; Dodge and Halie, however, insist nothing’s been planted there since 1935. The symbols are on the march, the meaning of the fecund backyard being one of the biggies. The yard is related to the play’s throbbing secret, suggested in its title; while we’re told how that buried child died, its paternity and the reason it was killed remain purposely vague. Meanwhile, Tilden’s similarly off-balance brother, the broodingly threatening Bradley (Rich Sommer, striving to be weird), clumps about on a wooden leg, the result of an accident in which he severed his limb with a chainsaw. A third son, the promising Ansel, died but what we learn of him is disputed by those he left behind.
Vince (Nat Wolff, shallow), Dodge’s seemingly normal musician grandson, and his girlfriend, Shelly (Taissa Farmiga, shrill), arrive, having stopped off on their way to visit Tilden in New Mexico. But—another mystery—neither Tilden nor Dodge recognize him, even though he’s been away only six years. (Some have suggested he represents what the buried child might have become if it had lived.) Shelly, who initially wants to leave, remains, slicing and dicing backyard carrots, almost like a new family member, while Vince goes off on a liquor run for his grandfather.

When he eventually returns, his drunken, bottle-throwing violence seems to come from nowhere, adding another layer to the play’s many bafflements, just as does the fact that everyone now recognizes him. A rush of incidents follows, with Father Dewis, who’s returned with Halie, finding himself completely adrift amidst the family’s dysfunction. After the revelation that other vegetables have joined the corn in the backyard, the family guilty secret enters cradled in Tilden’s arms; as Haley's offstage voice says, “Maybe it’s the sun,” he slowly climbs the steps, bringing it to her.
This is a play in which a very special atmosphere must prevail but, apart from Mr. Harris’s vivid performance as the seedy, alcoholic, cough-addled patriarch, Dodge, the production fails to resonate with anything like the effect it had all those years ago. Straightforward naturalism dominates, very little in Mr. Elliott’s staging, or even Peter Kaczorowski’s lighting, suggesting Shepard’s surrealistic underbelly. Although written in three acts, the play is performed for an intermissionless hour and 50 minutes, which only increases the feeling of drudgery. And, despite scattered laughs, the play’s rich vein of humor is barely evident.
Like the skeletal child Tilden carries on at the play’s conclusion, this production reveals how important the flesh and blood of a quality production are necessary to cover BURIED CHILD’s remains.