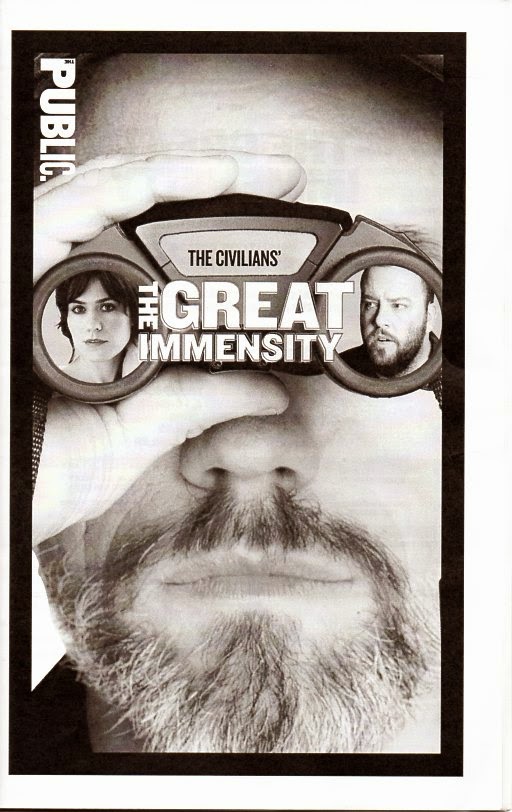 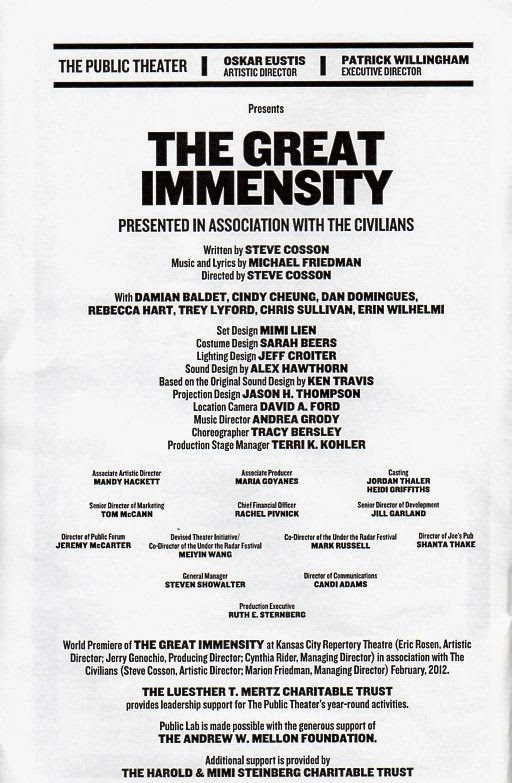 On the day I saw this show, my neighborhood in South Queens found itself under water for the second time in two years. The first, of course, was when Hurricane Sandy was kind enough to visit us, but the no-name monster that smacked us this week did even more damage than Sandy to the homes along my street, even getting special coverage on all the local news channels. These events, of course, are only asterisks on the list of worldwide evidence of the effects of global warming (excuse me, climate change), a problem that too many brain cell-damaged people continue to claim doesn’t exist. Clearly, there’s an urgent need to educate the public about it in easily digestible yet dramatic fashion, a task that Al Gore took up with excellent results in his documentary, AN INCONVENIENT TRUTH, although he probably wound up preaching only to the choir. This is likely to be what happens with THE GREAT IMMENSITY, the educationally effective, theatrically appealing, but dramaturgically flawed new musical about climate change that just closed at the Public Theatre. 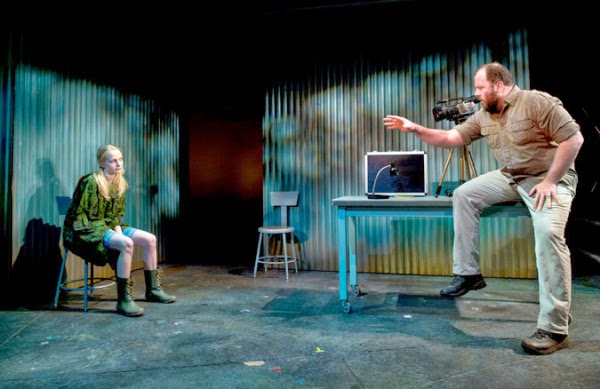 
THE GREAT IMMENSITY, written and directed by Steve Cosson, with music and lyrics by Michael Friedman, was presented by the Civilians, who are best known for their documentary-style theatre. The well-researched show, which appeared earlier at the Kansas City Rep, attempts to serve both as a classroom lesson in what climate change is doing to the world and—because it’s necessary, as a character says, to sell the message via a “compelling narrative framework”—as a hopefully entertaining story about a woman searching for her missing husband. It succeeds admirably in the first half of this equation, but falls down a bit in the second. Still, the effort is totally admirable and deserves to be seen widely, particularly by the heathens who need to see the light. I’d be surprised if audiences attending, however, were the ones most likely not to need the lesson. The performance I saw was filled with a group of middle-school kids from the elite Grace Church School who probably have all this data embedded in their DNA. 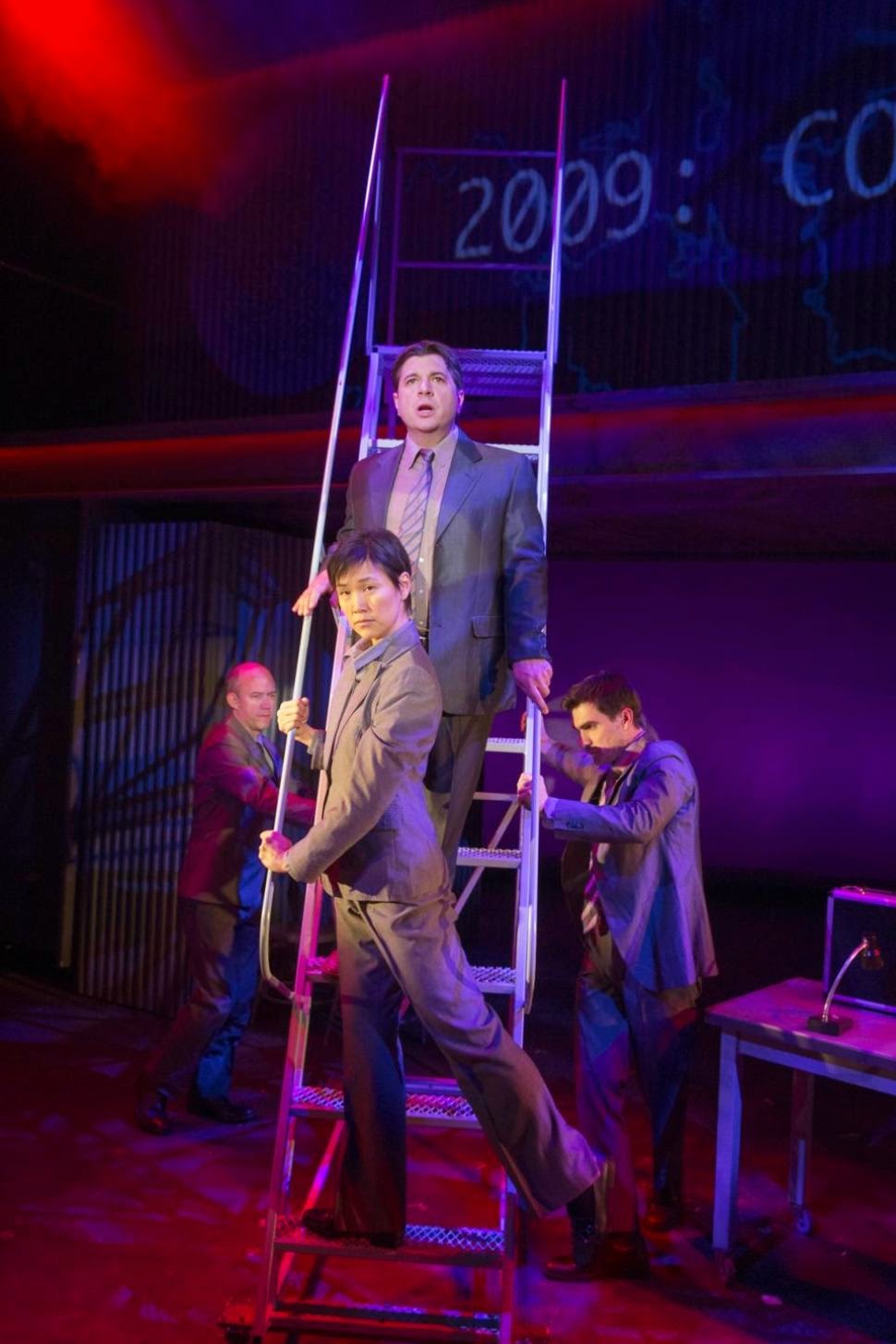 
Mimi Lien has designed a two-level set, built on a turntable, that allows for Jason H. Thompson’s extensive video and still projections to be flashed on the upper portion. The plot concerns the visit to Panama of Phyllis (Rebecca Hart), wife of the Emmy-winning filmmaker Karl (Chris Sullivan), who’s seeking Karl’s whereabouts after he vanished while filming a nature series. We learn that Karl became disillusioned with his producers when they insisted that his episode on sharks be more about the dangers they represent than the ecological dangers threatening them; scary sharks are more entertaining, of course, than endangered ones. Phyllis encounters various scientists during her quest, which eventually leads her to Churchill, Manitoba, on the Arctic tundra (the fate of the polar bears is a dominant issue), where she discovers that Karl has somehow become involved in an international plot involving students from each of the countries in the U.N.—a Greenpeace-like group called the Earth Ambassadors—who are tied to an upcoming Global Climate Summit in Paris. One of these earnest, perhaps too earnest, treehuggers is a remarkably articulate teenager named Julie (Erin Wilhelmi), who serves as the voice of the environmentalist movement, and whose words spark Karl’s newfound activism and agreement to help the Earth Ambassadors.

This simple summary hides the implausible plot developments, artificial characters, excessive number of environmental issues, unnecessary subplot about Phyllis and Karl's baby-making problem, and back and forth time shifts, culminating in an unlikely scene at the Paris conference where Phyllis is suddenly catapulted into the role of a major speaker.


The cast, most of whom (apart from Hart, Sullivan, and Wilhelmi) appear in more than one role, sometimes using heavy foreign accents, is uniformly good. The actors include Damien Baldet, Cindy Cheung, Dan Domingues, and Trey Lyford. The songs, while generally engaging, are not intended to send you out of the theatre singing or even humming them; they consist of melodically simple tunes that support information-intensive lyrics related to climate change; a rich vein of satire runs throughout them, as when the inability of governments to come to any meaningful agreements, no matter how many summits they attend, is ridiculed. Although rhyme often takes a backseat to reason, the songs are nicely performed in a variety of styles, a standout being an old-time vaudeville routine about Martha, the last passenger pigeon, which died at the Cincinnati Zoo in 1914.


Despite its drawbacks, it would be nice to see THE GREAT IMMENSITY (named for a Chinese container ship that figures in the story) have a longer life by being presented in schools across the nation, especially in places where skepticism runs high. How sad it would be to see the ecology of show biz make a show like this extinct before its time.
Posted by Samuel L. Leiter at 7:43 PM