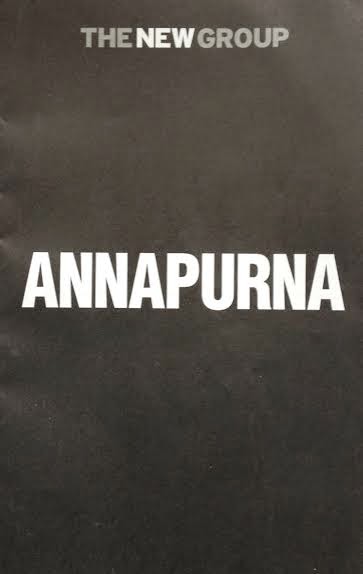 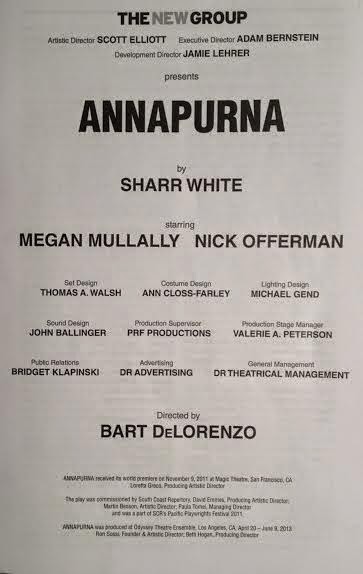 When you enter the Acorn Theatre to see Sharr White’s ANNAPURNA you may want to reach for a Coors since designer Thomas Walsh’s set shows a naturalistically squalid trailer interior surrounded by brightly realistic images of Rocky Mountain peaks. The filth-filled trailer, like the shabby office of THE FEW (see the review before this one), is packed with the accumulated detritus of years of use and abuse. Actually, ANNAPURNA and THE FEW share a few things in common. Each has someone who fled their loved one after a dramatic occurrence and now, years later, seeks out that person in search of some kind of redemption, even if reluctant to admit it. Each also has a third party, a young man, yearning for a father figure, although this person is an actual character in THE FEW and is only spoken of in ANNAPURNA, a two-hander. In both, the onstage characters are writers or editors, personal letters (the snail mail kind) play an important role, and the big reveals have to do with what prompted the person who left to do so. While ANNAPURNA is well written (and directed, by Bart DeLorenzo), however, it’s less affecting, believable, or involving than THE FEW.


Certainly, the major draw is the performances of TV stars Nick Offerman (“Parks and Recreation”) and Megan Mullally (“Will and Grace"), husband and wife in real life, who appeared in ANNAPURNA at the Odyssey Theatre Ensemble in Los Angeles a year ago, although the play was premiered with other actors in San Francisco in 2011. Mr. Offerman plays Ulysses, a bearded, gruff, Hemingway-ish, recovering alcoholic and one-time cowboy poet and English professor now living in self-imposed, self-pitying exile. Ms. Mullally is his ex-wife Emma, who also was his editor, and who suddenly walked out on him 20 years ago in the middle of the night. Just as suddenly, and without advance notice (he has no phone), she shows up at his insect-infested mountain aerie in Paonia, Colorado; he’s anything but thrilled to see her, having gotten used to his solitary, if unsanitary, lifestyle. The only thing he can say, in fact, is "Holy crap!" which he repeats in amazement several times. It seems that their 25-year-old son, Sam, who was five when Emma left, has discovered a cache of letters his dad had written to him, which even Emma didn’t know about, and has learned Ulysses’ whereabouts through the services of a private eye. Ulysses, for his part, is deeply puzzled about why Sam never wrote back to him.
Megan Mullally, Nick Offerman. Photo: Monique Carboni.


Emma, hoping to smooth the way before Sam arrives, gets there first and discovers her divorced husband living a grit-encrusted life, wearing nothing but a mucky little apron (to prevent damage to his nether regions from the spatter when he fries the spoiled sausages he bought at the Dollar Store). Ulysses not only calls his location “the ass-crack of the Rockies,” he literally reveals his personal version of that remark whenever he turns around. He wears a backpack with an oxygen tank whose tube enters his nose because this former chain smoker, who puffed five packs the day he quit, is dying of emphysema, a fate made even more apparent by the surgical bandage on his chest put there after a lung was removed.


Emma’s a smartly dressed, perhaps too fashionably coiffed (with magenta-tinted hair), glasses-wearing woman who hasn’t had it easy after leaving Ulysses and marrying again, as attested by the bruises she displays. But despite Ulysses’ retch-inducing habitat (I won’t give away why he keeps his inhaler sealed away), she seems determined to resolve their issues, meanwhile setting to the task of cleaning the place with ferocious single-mindedness. (THE FEW also has a scene of intensive straightening up.) As Mr. White continues to string out the situation between Ulysses and Emma with memories, arguments, and questions, one big issue hovers, what did he do that led to her abandoning him? This, of course, is kept secret for as long as possible in the one-act, 95-minute play, and when it comes the payoff is less than earth-shattering, even if Ulysses— having been subject to alcohol-induced blackouts (a device playwrights love to exploit)—has no memory of it.


As in THE FEW (despite its ambiguous staging), an optimistic ending is provided in which we hear Ulysses read to Emma from the epic poem he’s been writing, called “Annapurna,” a metaphoric title referring to the dangerous Himalayan mountain of that name and to Emma herself. The manuscript itself, having been rendered essentially unreadable, is spoken by Ulysses from memory, which I suspect is a feat most modern epic poets would be incapable of achieving. Perhaps his name, with its echo of Homeric bardism, is excuse enough for this feat.


Despite the mechanical nature of the plotting, Mr. White’s squabbling dialogue is juicy enough to sustain interest, especially when as well delivered as it is in Mr. Offerman’s bullish yet sweetly vulnerable manner. Ms. Mullally’s voice can be shrill but she brings intelligence and skill to Emma, and makes an effective partner to her costar/spouse. Both balance the play’s darker moments well with infusions of sharp humor. John Ballinger’s sound design, in which a barking dog plays an important part, is valuable, as are the costumes by Ann Closs-Farley and the often shifting lighting effects of Michael Gend.


ANNPURNA may not rise as high as its namesake mountain, but it offers its actors a chance to scale some heights of their own.
Posted by Samuel L. Leiter at 6:33 PM