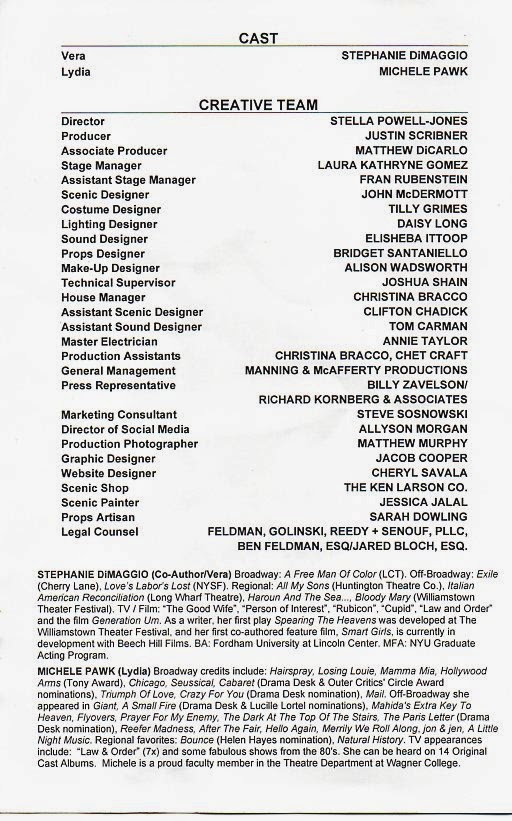 The title of this well-acted but less than successful new play by Anton Dudley and Stephanie DiMaggio, now receiving its world premiere at the Beckett Theatre, refers to the address of an apartment building in a Cleveland suburb. It’s where Vera (Ms. DiMaggio), a woman in her thirties, has lived most of her life and which she manages on her absent mother’s behalf. A plain, dumpy spinster who’s found religion and never touches alcohol, Vera pays little attention to her appearance; her principal concession to decorating her nondescript apartment, realistically designed by John McDermott and effectively lit by Daisy Long, being the various crucifixes pegged here and there to the walls. For the moment, however, the place has been spruced up with adornments heralding a forthcoming baby shower.

Into this otherwise drab environment there suddenly appears a vivid shaft of brightness represented by Lydia (Michele Pawk), Vera’s flashily attractive, cynically sarcastic mother, just in from Las Vegas where she's lived for ten years and currently cohabits with her boyfriend, Stuart. Lydia has come to celebrate the forthcoming birth of a child by Annie, her other daughter; no one else will show up, though, because this two-hander is concerned only with exploring the sharply contrasted characters of Lydia and Vera and their strained relationship. The baggage Lydia hauls in from her flight is a metaphor for the personal baggage these two will have to confront. 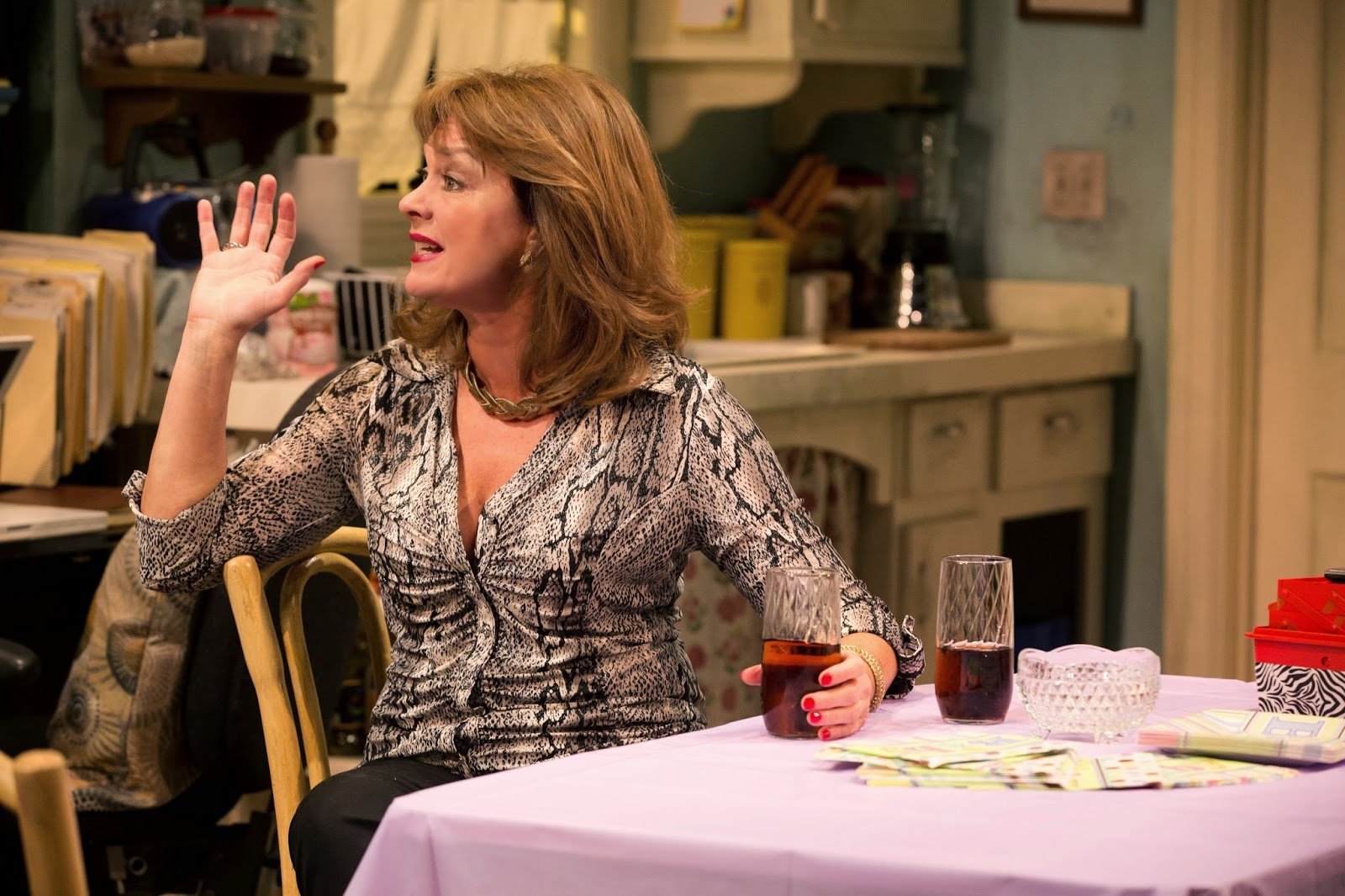 
The 50ish Lydia is a hard-drinking, selfish, ultra-narcissistic, and unintentionally cruel hedonist, a woman who does all she can to hold back the clock on her aging body and to get as much fun out of life as she can. Annoyed by Vera’s dowdiness and lack of sexual experience, she attempts to doll her up, applying makeup, putting up her hair, and trying to get her interested in a man. She even sets up an amusing improvisation in which she tries to give Vera a lesson in how to get picked up a guy in a bar. Speaking as the man, Lydia, says at one point: “You live around here?” to which Vera says “Yes” and Lydia insists, “With ease, Dear, you sound constipated.”
Eventually, the sometimes tense, occasionally funny chitchat grows more urgent; secrets and lies come bubbling to the surface, and there’s even a high-stakes game in which each participant must deliver some hidden truth before downing a shot of bourbon, the first one to vomit being the loser. As usual in such plays, there are a couple of big reveals, and, finally, an ending you may not expect.
Michele Pawk, Stephanie DiMaggio. Photo: Matthew Murphy.


Tony-winning actress Michele Pawk gets every ounce of mileage from her showy role. A voluptuous woman, she constantly fluffs her well-coiffed hair and struts about in an outfit perfectly designed by Tilly Grimes, wearing tight black pants and a black and white bolero-length jacket with large lapels. With her jacket off, and her torso wrapped in a form-fitting silk blouse, Ms. Pawk thrusts her bra-covered but notably abundant breasts forward as if insisting that the world take notice before they begin their inevitable encounter with gravity.


Ms. Pawk’s appearance aside, however, her character tosses off so many perfectly crafted puns and smartass bawdy zingers and epigrams that you begin to think her life in Vegas must be spent either studying the local standups or watching sitcoms. An early example comes after Vera reminds Lydia that when sister Annie was a child, and her mom dressed to go out, Annie would tell her to add a brooch. Lydia: “I never liked boob art. My breasts are fit for the Louvre, why put a bow on a bow?” Or, “Vera, don’t look a gift horse in the mouth. Might have to have its teeth whitened, but I certainly wouldn’t look it in the mouth.” And, speaking of Vera’s getting older and still not having kids, “Venus only gets flies in her trap when she opens it.” Too many quips fall flat, as when she asks a crucifix, “How’s it hangin’?” Of course, the success or failure of these wisecracks depends on the skill of the performer, and Ms. Pawk rarely misses a beat or fails to underline just the right words.


Ms. DiMaggio, who probably wrote Vera for herself, is perfectly cast as the responsible, intelligent, born-again, physically unprepossessing daughter, who's asked her mother to fly in from halfway across the country for a purpose unconnected with a baby shower. Ms. DiMaggio makes it sound plausible enough at first, but after a little thought you may find it hard to suspend your disbelief.


In general, 17 ORCHARD POINT, efficiently directed by Stella Powell-Jones, is a decently crafted and modestly entertaining piece of work, the weaknesses of its script shielded from too much critical radiation by the finely honed skills of its performers.
Posted by Samuel L. Leiter at 7:18 AM