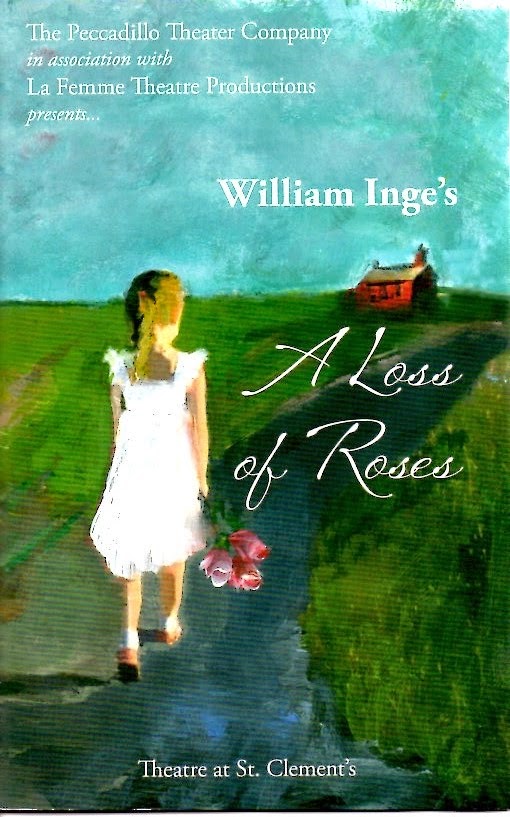 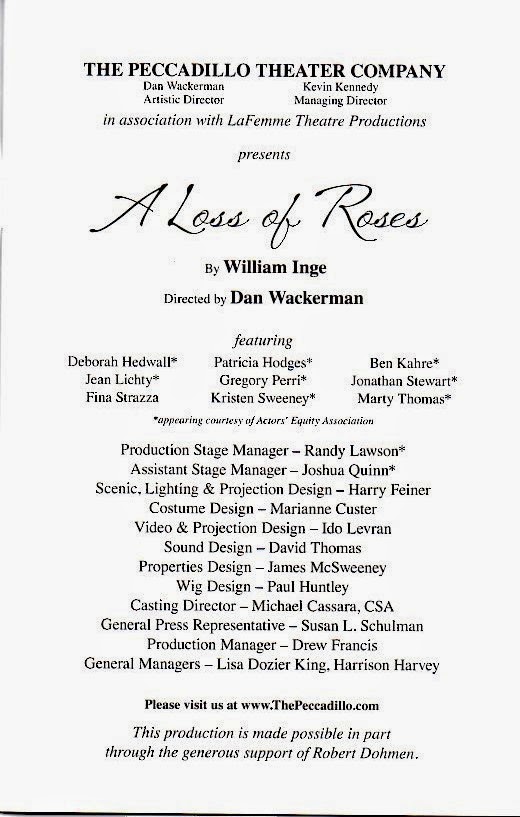 There seems to be a strong temptation by producers and theatre companies looking for material to reclaim failed plays from the past and give them another chance. One may wonder why junk like the infamous MOOSE MURDERS would hold such an attraction, but when the playwright is a major figure, like William Inge, it’s quite easy to appreciate the impulse to revive plays like NATURAL AFFECTION, done Off Broadway last year, or A LOSS OF ROSES, now onstage at St. Clements Theatre. Surely, the thinking must go, a playwright so celebrated could not be responsible for such a flop. The cause, dear Brutus, must have lain in the stars, or the direction, or a union strike, or, as Inge himself believed was the case with A LOSS OF ROSES, the changes he was forced to make when readying the script for production. Sometimes, as in last season’s revivals of Van Druten’s LONDON WALL at the Mint or Priestley’s CORNELIUS at 59E59, the results make the effort worthwhile, but more often than not, as with the Inge plays, the revivals are as unsuccessful as the originals, perhaps more so. 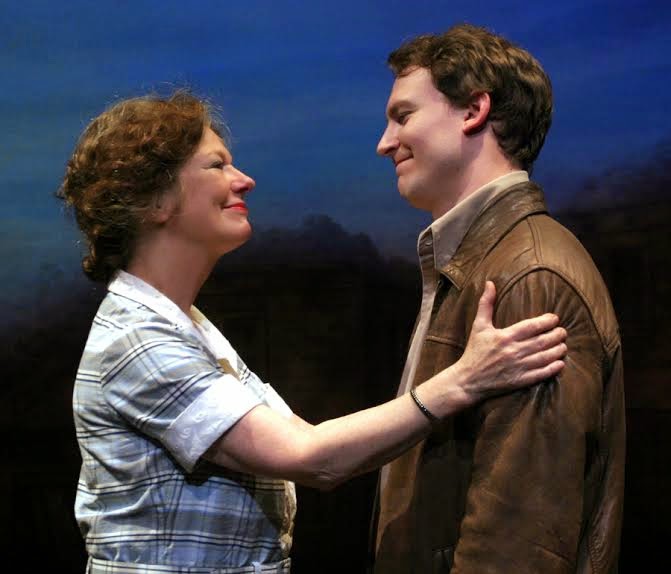 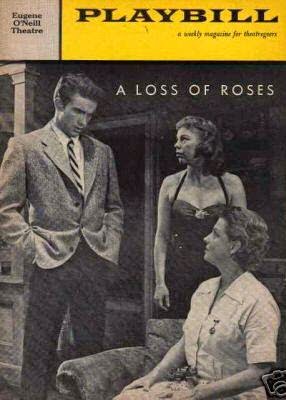 The premiere of A LOSS OF ROSES in 1959 at least had the benefit of a new young actor, the 21-year-old Warren Beatty, as Kenny Baird—the 21-year-old, grease monkey son of a Depression-era, small-town Kansas widow, Helen (Deborah Hedwall, giving the play’s only distinctive performance). Beatty was nominated for a Tony (and quickly became a movie star, beginning with SPLENDOR IN THE GRASS, script by Inge), but no such charismatic performer appears in the St. Clements revival, blandly directed by Dan Wankerman for the Peccadillo Theatre Company. Ben Kahre’s Kenny is pleasantly handsome in the Patrick Wilson mold, but his acting—which will win no awards—is prosaic, unpersuasive, and occasionally inaudible. Also struggling for a semblance of believability is Jean Lichty as Lila Green (first played by Carol Haney, the original “Steam Heat” dancer in Broadway’s PAJAMA GAME), the local girl who babysat Kenny and otherwise helped Helen out years before and who returns to stay with Helen and Kenny when her career as a tent show actress hits a snag. Lila will board with Helen and Kenny while waiting for her boyfriend, the slick Ricky Powers (Jonathan Stewart), the tent show company’s heavy, to find work for her in Kansas City. Lila is described by Inge as “an extraordinarily beautiful woman of thirty-two, blond and voluptuous, still with the form and vitality of a girl,” a description that sounds much more like Marilyn Monroe than anything Ms. Lichty, who previously played the role for the Arkansas Rep, can muster (and that the toothsome Carol Haney certainly didn’t  fulfill). The movie version, called THE STRIPPER (1963), was actually written for Monroe, although Joanne Woodward ended up playing the role, with Richard Beymer as Kenny. You’d have to be blind not to see trouble brewing in the setup of having the rebellious, hormone-fueled Kenny sharing a small house with this attractive and kind, yet troubled, older woman; when the inevitable sexual crisis arrives it’s almost anticlimactic. 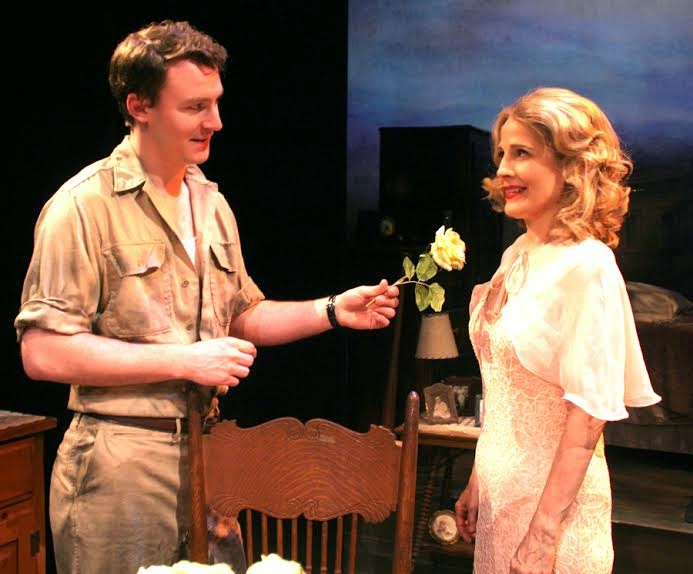 Ben Kahre, Jean Lichty. Photo: Michael Portantiere.
Inge complained in the preface to the script's published version that production pressures forced him to revise the play against his will, for which he blamed its failure (it ran for little more than two dozen performances). Although he incorporated in the published script some of the more useful changes, he otherwise reverted to his original, particularly the play’s ending, which shifts the focus from Kenny’s decision to leave his mother and get a job elsewhere to Lila’s departure for well-paying but shameful work under Ricky’s management. The Peccadillo production is of this published script, but the play remains predictable and dreary. With its vulnerable, mentally unstable, romantically doomed, and suicidal heroine; its love-hate relationship between a lusty young stud and an attractive older woman; its Oedipal mother-son conflict, and so on (including the brief presence of a flamboyantly gay man), the characters and situations are too clearly reminiscent of Inge’s contemporary superior, Tennessee Williams. Williams's THE GLASS MENAGERIE, in fact, inspired Inge to become a playwright.


Harry Feiner, who did the sets, lighting, and projection design, has abandoned walls in his depiction of the Baird homestead, opting for a simple layout of kitchen furniture at stage right, living room couch (“davenport”) and so forth at center, and raised platform up left for the bedroom. Stage left is the front lawn area, and the space immediately upstage of the house also is out of doors. Dominating the set is a painted backdrop of the local town that, under Mr. Feiner’s lighting, changes color atmospherically any number of times; otherwise, however, the lighting is often dismally dark on the actors’ faces, sometimes making it impossible to see them clearly, especially in the upstage scenes. Marianne Custer’s costumes give a general sense of 1933. The doyen of wigmakers, Paul Huntley, did the ladies’ wigs, but Ms. Lichty’s is too untidy.


Inge had had a series of major hits in the 1950s, including such still revived plays as PICNIC, THE DARK AT THE TOP OF THE STAIRS, BUS STOP, and COME BACK, LITTLE SHEBA, but the decades to come proved unkind, beginning with A LOSS OF ROSES. Brooks Atkinson, the New York Times’s chief critic, wrote the following after Inge killed himself in 1973. “Although the environment of ‘A Loss of Roses’ was familiar, the play was dull. The problems and dilemmas of the characters did not matter. It was as if Mr. Inge had lost his gift of seeing living truths in obscure places. For all practical purposes, his career was over.” Sadly, seeing it now, well over half a century after it appeared, confirms Atkinson’s unhappy impression.