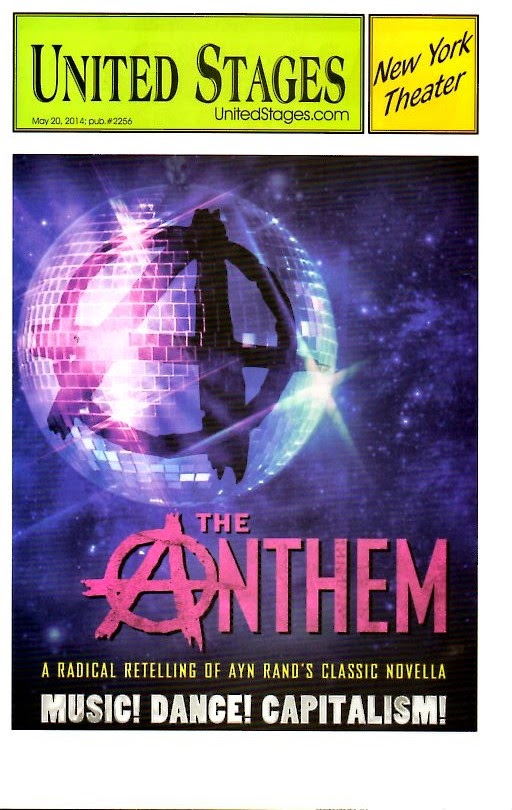 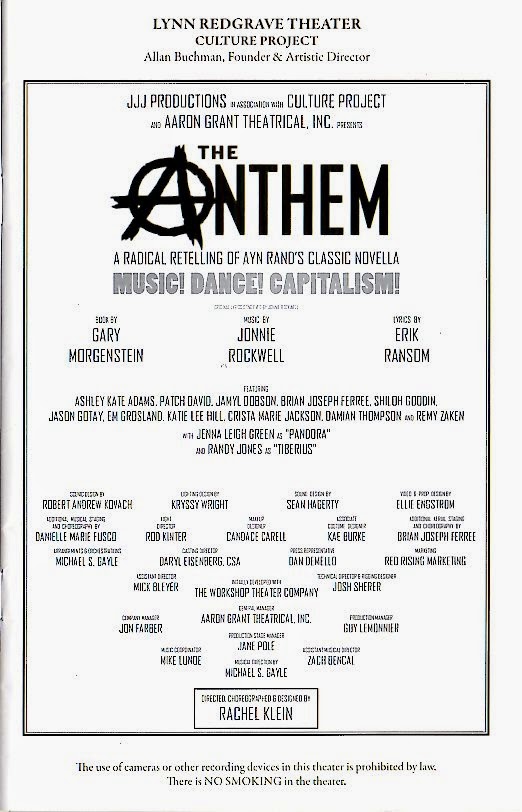 Imagine, if you will, a Woody Allen movie with a scene set in a small Greenwich Village theatre where an intrepid troupe of talented and not so talented players is producing an ambitious new avant-garde musical based on a dystopian novel by Ayn Rand, under the guidance of a highly touted young director-choreographer. For all the efforts of the cast, the more the show struggles for artistic and intellectual significance, the more it takes to keep it from collapsing under the weight of its own pretentiousness. In a Woody Allen film, this would be hilariously funny; in reality, it might make you cringe. That, more or less, was my reaction at the Lynn Redgrave Theatre during much of THE ANTHEM, whose program announces it as “A radical retelling of Ayn Rand’s classic novella: MUSIC! DANCE! CAPITALISM!” As all those caps indicate, someone had their tongue in their cheek when conceiving this stillborn show; would that the cheekiness of those words had been transferred to the stage during its performance, which simply cannot make up its mind just how much it wants to take Rand’s book seriously and how much it intends as satire or spoof. 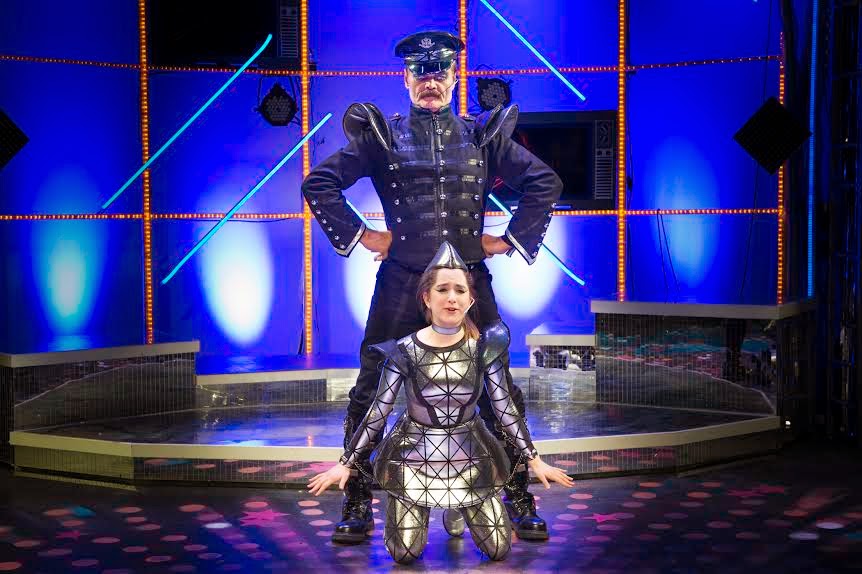 The director-choreographer behind THE ANTHEM, whose book is by Garry Morgenstein, lyrics by Erik Ransom, and music by Jonnie Rockwell, is Rachel Klein, who did a very imaginative turn on AROUND THE WORLD IN 80 DAYS last season, and who some have likened to a latter-day Julie Taymor. Confirmation of that assessment will have to wait until Ms. Klein’s future assignments, however, because THE ANTHEM is simply so overstated in so many ways that it would be best to put it aside as one of those missteps all artists are entitled to as they build their resumés.

Why all the sudden theatrical interest in THE ANTHEM is a question better minds than mine will have to figure out; last season alone, there were two adaptations (for my review of one of them, see http://slleiter.blogspot.com/2013/10/116-review-of-anthem-october-12-2013.html). Rand herself at one point considered writing it as a play instead of a novella, but the two versions of it I’ve seen offer little support for its dramaturgic possibilities.

The present adaptation takes great liberties with the text, converting it into something like a mash-up of Rand’s book, THE HUNGER GAMES, and BUCK ROGERS (or BARBARELLA, as my theatre companion noted). It’s set in a futuristic world of collectivism, after the world as we know it has been destroyed by war during the Unmentionable Times of the 21st century, where total conformity is the law of the land, and any sign of individualism will lead to serious punishment, perhaps even death. Children are raised by the state, and have no connections with their biological parents.

Ruling this society, within what is called the Grid, is a beautiful woman, Pandora (Jenna Leigh Green), known as First Citizen, in silver platform boots and high-collared black leather tunic. At her side is the second in command, Tiberius (Randy Jones), or Second Citizen, a mustachioed man in a black, multi-buttoned military tunic and officer’s hat, suggesting a figure from a Tom of Finland drawing. Given that the actor playing him was a member of the original Village People (he was Cowboy), this makes a certain kind of sense, I guess. Standing alongside them is the Executioner (Jamyl Dobson), an imposingly tall and muscular black man, his head partly shaved, dressed in tight black shorts, platform boots that make him even taller, and a dominatrix-like (let’s not argue about gender attributions here) leather bra fitted around his bulging pectorals. An offstage voice represents a computer that controls the society’s technical functions. In one of the show’s many unoriginal touches the voice is named Sirius. It appears that different well-known performers read Sirius’s words at each performance; Daphne Rubin-Vega was Sirius when I attended, but the voice is so robot-like and amplified the lines could be read by practically anyone, including the similarly named dame on my Iphone.

The regular citizens in this rigidly controlled society, where one says “we” instead of “I,” all wear skintight, silver Spandex uniforms with harlequin-like diamond designs; on their heads is a small silver garrison cap (like what a roller skating waitress might have worn at a drive-up food joint in the 50s). All they need is an oil can to complete this cutesy Tin Man ensemble. (Ms. Klein did the designs.) Unlike Rand’s original, the characters no longer have old telephone number-like names. Instead their appellations are plucked from classical antiquity; Liberty 5-3000 is called Prometheus (Jason Gotay), a name chosen for himself in Rand’s book, and Equality 7-2521 is now Athena (Ashley Kate Adams; in the novella, Liberty 5-3000 calls her Gaea). Such naming, it might be thought, is a disservice to Rand’s idea of giving people names with numbers as a way of diminishing their individuality. But in a campy show like this, such academic matters are of little import.

Hera (Remy Zaken) is the girl who has been selected as Prometheus's mate, only to lose him to the gorgeous Athena, daughter of the late rebel, Titus the Transgressor; Athena lives in the Uncharted Forest with her band of rebels outside the Grid and free of its control. It’s there that Prometheus meets her when he’s punished for his independent thinking by being sent to sweep leaves. Prometheus manages to avoid being executed because . . . well, there’s a big reveal  involving Pandora that tells us why. Prometheus, designated by the rulers to be a lawyer despite his scientific inclinations, eventually reinvents the light bulb, but when he presents it for approval it's rejected, inspiring him to run off and join Athena and the forest people.

Athena, dressed something like Wonder Woman, wears a rather memorable cape made of a filmy gold fabric that she manipulates like wings, with attachments at her wrists. Like everything else in this over-the-top show, she overdoes the flapping business, diminishing its effect, but the image of the statuesque Ms. Adams in her flaring cape is nevertheless indelible.

War breaks out between those inside and those outside the Grid, the latter representing totally free thought and, I imagine, the advantages of capitalistic philosophy, although this is not of particular concern. On the other hand, the work concludes with the victorious rebels celebrating not simply freedom of thought and independence of behavior, but anarchy, a word celebrated in song and on video screens, where it is flashed over and over. I’m not sure why anarchy has been chosen as the story's ultimate goal, but the Rand specialists say it's something to which her brand of libertarianism was strongly opposed. The word emphasized at the end of her book isn't anarchy but “ego.” The plot, in essence, is an anthem to this concept.

Regardless of whatever political message this raucous hodgepodge intends to convey, it seems mainly interested in the theatrical possibilities of telling its story through a rock-inflected score using extensive choreography and visual effects. Robert Andrew Kovach’s scenic design, sometimes dominated by a mirrored disco ball, converts the acting area into a modernistic, chrome-dominated, sci-fi environment, but it does so with a shmear of cheese. Kryssy Wright provides a lot of colorful lighting effects; there are also strobes used during a slow-mo fight scene. Very little on view, however, is surprising or original, which can be said as well of the music, which is consistently derivative, only sporadically melodic, overly loud, and instantly disposable. The challenge of singing the clunky lyrics to Ms. Rockwell’s tunes must have been a great one for the performers, who often seem to be laboring in a who-can-sing-loudest contest. There are some honest to goodness talents here, such as Mr. Gotay, but the material is simply too banal and overwrought for anyone to bring to it even a semblance of life. Ms. Klein’s decision to have much of the dialogue played as broadly as possible to suggest some kind of stylized manner of speaking sterilizes any germ of nuance and subtlety that might have been lurking in the shadows. THE ANTHEM will not be remembered for its acting.

Ms. Klein makes extensive use of her choreographic abilities, which include not just standard dance routines but a roller skating number and several sequences using the kind of aerial ballet so common now in circus performances, where lithely muscular acrobats do wondrous routines on ropes and hanging fabrics. These are employed as a way of making the forest scenes take on something of a magical atmosphere, reminiscent of A MIDSUMMER NIGHT’S DREAM. But they do little to enhance the plot and eventually come to seem little more than a self-indulgent directorial gimmick.

With two versions of ANTHEM now under my theatergoing belt, I hope the next one I encounter is the one that starts, “O, say can you see. . . .”  At least that one has a tune to which you can sing along.