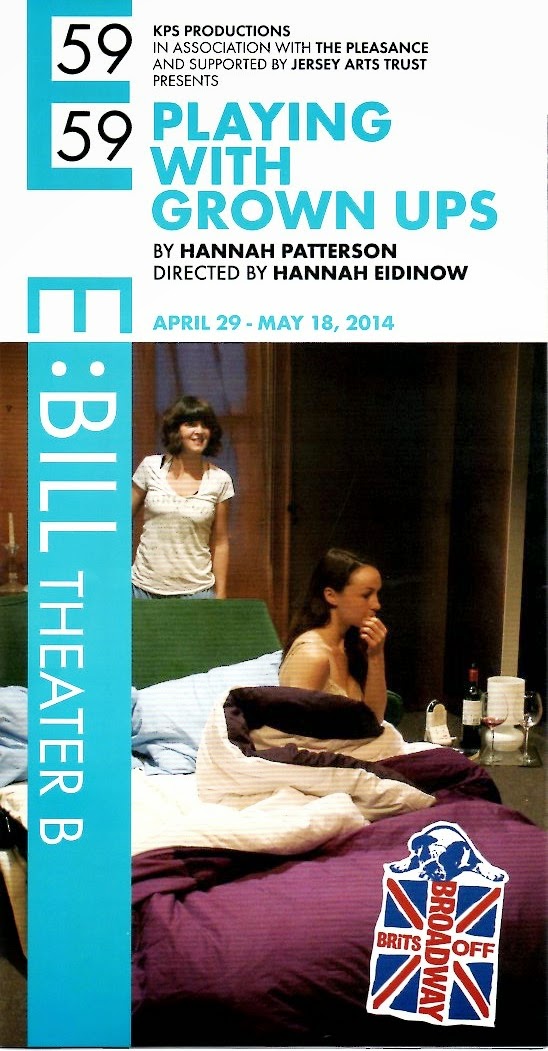 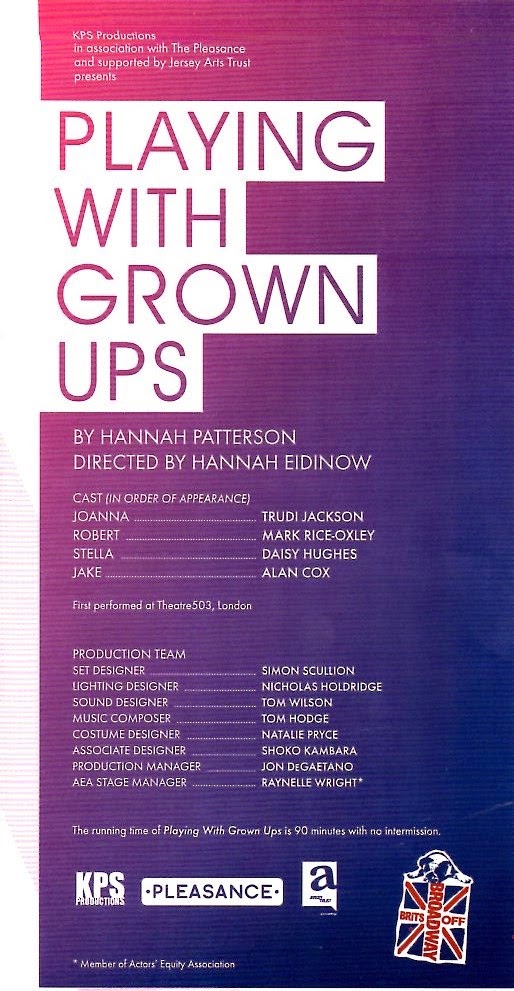 When Joanna (Trudi Jackson) walks out on her husband, Robert (Mark Rice-Oxley), and 9 week-old baby at the end of Hannah Patterson’s PLAYING WITH GROWN UPS, you brace yourself for the inevitable sound of a door slamming. When it does, you realize how far and yet not so far we’ve come since Nora walked out on Torvald at the end of Ibsen’s A DOLL’S HOUSE in 1879. In that play, a wife leaves her family because, oppressed by how wives are treated in a patriarchal society, she needs to assert her independence as a woman; in PLAYING WITH GROWN UPS, a wife does the same thing because, granted that independence (she’s in publishing), she’s unable to balance it with the responsibilities of motherhood and domesticity. 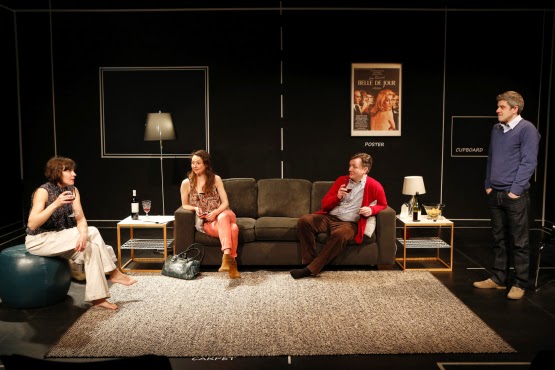 
Then again, maybe Joanna’s simply suffering from postpartum depression, or as the play’s other woman, a preternaturally mature teenager named Stella (Daisy Hughes) suggests, post-traumatic stress syndrome (as the result of a Cesarean delivery). Nora’s departure, despite all the justification Ibsen gives her, can still prove difficult for some people to accept; much more disturbing is the case of Joanna, an avowed feminist whose anxiety seems more the result of someone living in an age when women are expected to be able to have it all. Instead,  she finds motherhood completely alien to her nature, especially when—despite Britain’s allowance to workers of a year of maternal leave—she’d rather be tending to the work of history’s neglected female writers.
Daisy Hughes, Alan Cox. Photo: Carol Rosegg.
Ms. Patterson’s play, part of the annual Brits Off Broadway Festival at 59E59, begins with Joanna blasting Helen Reddy’s “I Am Woman” on her i-pod speakers to cover the sound of her colicky baby’s incessant crying. Soon, Robert, obtuse to his wife’s dysfunctional conduct, announces the imminent visit of his longtime friend and colleague, Jake (Alan Cox), and his date for an evening of dinner and drinks. Jake chairs the university film department in which Robert teaches, Jake specializing in Italian cinema and Robert in British social realism (“Jakes gets Monica Vitti and poor old Robert gets Rita Tushingham,” cracks Joanna); financial problems threaten the department’s future, as does the growing popularity of practical film studies over the theoretical/historical subjects studied by Jake and Robert, which makes them “dinosaurs.” Jake, Robert, and Joanna are all about 40, but Jake’s companion is a 17-year-old high school girl (16 in the script but adjusted for American sensibilities). Jake, an unregenerate bachelor, once was Joanna’s lover, but she opted for marriage to the more stable material represented by Robert. Alone for a moment, Joanna and Jake begin to embrace but her leaking breast milk soils their clothes and, equally disgusted, they leap apart.


All the action transpires in a living room around drinks and conversation (and offstage wailing, heard on a baby monitor), in a way mildly reminiscent of a defanged, only sporadically venomous WHO’S AFRAID OF VIRGINIA WOOLF? They talk about their work, the department, their pasts, male-female differences, the difficulties of having a career and raising a family (“Bring back wet nurses,” says Joanna), and Joanna’s paranoiac belief that being a mother makes her “nothing” in people’s eyes. Stella, the daughter of a divorced psychoanalyst, is the only one who seems grounded and realistic, although she’s not interested in going to university, and her relationship with Jake is clearly that of a girl in need of a father figure; she’s not only helpful but displays just the kind of nurturing personality that Joanna, brittle, unable to accept a compliment, and probably suicidal, is not. When Jake describes one of Joanna’s three principal traits as her motherliness, she resists the label. Stella, while not as knowledgeable as the others (she doesn’t recognize a poster image of Catherine Deneuve and can offer only Jane Austen as a major female writer she’s read), sometimes seems the most perceptive character, but the playwright has her delivering narrative commentaries to the audience at several places that feel unnecessarily intrusive.


Most of the lines are no more than snippets of several words each, so the dialogue bounces briskly from one side of the court to the other. The play moves along, going nowhere fast, until a sudden explosion after Jake and Stella have gone to bed on the fold-out couch, but without having sex (she’s saving it). Robert, thinking otherwise (and possibly jealous), bursts in on them shouting about how morally awful what they’re doing is, and the play briefly comes to spirited life, implausible as the situation is.


All four actors, smartly directed by Hannah Eidinow, do their best to breathe life into the 90 intermissionless minutes of this slight, meandering, dramedy. Still, they can’t do much to make it more than a passable interlude with a central character whose problem—while shared with countless other women—is expressed in a way that makes her seem either psychologically impaired or selfishly incapable of bearing the responsibilities she signed on for when she had a child in midcareer. Her husband may have had blinders on regarding the seriousness of Joanna’s issues, but he’s less to blame for them than Torvald is for Nora's.


Simon Scullion’s set design is a simple arrangement of three black walls around several pieces of contemporary furniture and a rug. The walls, though, are interestingly highlighted by strips of masking tape indicating where the fireplace, cabinet, window, and so on would be, with the words for these things provided as well; indications are also provided of the heights of the walls and their molding placements, as if they were part of a blueprint. Perhaps the idea is to suggest a dollhouse structure in which the play’s schematics are worked out. Even the play’s title, PLAYING WITH GROWN UPS, suggests an ironic twist on the idea of playing with a dollhouse, with the child here being Stella and the dolls she plays with  the older, but far more childlike characters.
PLAYING WITH GROWN UPS tackles a subject of considerable topical concern. It does so, however, in a not particularly fresh or enlightening way, and the bearer of its message, Joanna, proves more alienating than sympathetic.
Posted by Samuel L. Leiter at 6:01 PM