The stock companies of the 19th-century were able to produce plays of varying types because their actors were hired to play specific types of characters, and playwrights wrote their plays with what came to be called “lines of business” in mind. In the modern world, a stock company would be required to produce such a wide variety of plays that maintaining a company on the basis of character types would be impossible. Any such company would have to find actors of considerable versatility, since using the same resident actors from play to play would sometimes lead to less than ideal casting. Now and then, in fact, it would be necessary to job in non-resident actors to play particular roles not ideally suited to the actors on hand. This, more or less, is the practice of the Pearl Theatre, New York’s closest approximation of a traditional stock company, one whose task is especially perilous because its repertory is largely based on classical or semi-classical plays, which make even greater demands on actors. As a result, the Pearl’s productions, for all their earnestness and ambition, sometimes fall a bit short of the bar. With their current revival of Richard Brinsley Sheridan’s THE RIVALS, I’m happy to report, the Pearl, with only a few minor exceptions, is doing its best work of the past two seasons.
Jessica Love, Cary Donaldson. Photo: Al Foote III.


THE RIVALS, which premiered at London’s Covent Garden in 1775, is one of those late 18th-century plays often (and erroneously) referred to as Restoration comedy, a form that flourished much earlier, in the late 17th century, but which, stylistically, has certain resemblances to the later works. Plays like THE RIVALS and its contemporaries, such as Sheridan’s THE SCHOOL FOR SCANDAL and Oliver Goldsmith’s SHE STOOPS TO CONQUER, are known, as per Goldsmith’s 1773 “An Essay on the Theatre,” as “laughing comedies” in contrast to the period's weepy, moralizing “sentimental comedies.” Their language is less prolix and their plots more accessible to modern audiences than many Restoration comedies. This may make them somewhat easier to act as well, but that's not to deny the great demands they make in bringing them to life. The Pearl’s lively revival, whose early expository scenes require a bit of patience to get through before the fun really starts, eventually finds its groove and moves steadily toward its delightful conclusion, with all the many threads tidily tied together, creating a charming bonbon of theatrical pleasure. 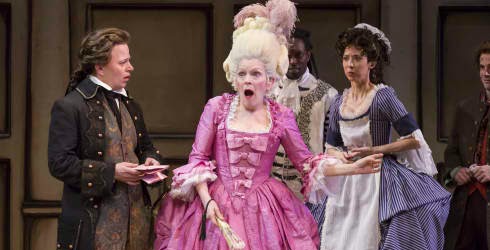 Sean McNall, Carol Schultz, Joey Parsons. Photo: Al Foote III.
The plot, which is set in the ultrafashionable town of Bath, is a complex yet easily followed web of deceptions and lies, with freshly drawn stock characters and marvelous digressions on subjects such as honor, romantic love, cowardice, jealousy, and honesty. Captain Jack Absolute (Cary Donaldson), heir to the fortune of the bombastically autocratic Sir Anthony Absolute (Dan Daily), is in love with the beauteous but popular novel-addicted Lydia Languish (Jessica Love); he believes, however, that she would not reciprocate unless he were of lesser status, so he passes himself off to her as a poor, lowly ensign named Beverley. This, naturally, leads to a bundle of complications and misunderstandings, made even more complex by the existence of a rival for Lydia’s hand in the foolish country squire Bob Acres (Chris Mixon). Subplots include Sir Anthony’s courtship of Lydia’s widowed aunt and guardian, Mrs. Malaprop (Carol Shultz), a character famed for using the wrong fancy words for one another (“pineapple” for “pinnacle,” “epitaphs” for “epithets”, etc.) yet proud of her linguistic skills; and the love affair between Jack’s friend Faulkland (Brad Heberlee) and Julia Melville (Rachel Botchan), she sincere and forthright in the manner of a sentimental heroine, he so worried about the depth of her affection he finds reason to doubt it on every occasion, driving her to distraction. Also prominent is Sir Lucius O’Trigger (Sian McNall), a fiery, trigger-happy Irishman (he was deemed an insult to Ireland by attendees at the premiere performance and had to be rewritten), and also a potential rival for the hand of Lydia Languish, although he’s the victim of a ruse devised by the maidservant Lucy (Joey Parsons) in which the person he’s wooing turns out to be Mrs. Malaprop.

With performances ranging from outstanding (I loved Mr. Daily as the high-spirited, hot-tempered, but really warmhearted Sir Anthony) to the highly competent (Ms. Schultz’s Mrs. Malaprop should wring a bit more humor out of her verbal manglings, and Mr. McNall’s Sir Lucius veers toward the colorless), the play’s considerable wit keeps the audience smiling for its two hour 45 minute length (with one intermission). I suppose there have been funnier productions of THE RIVALS, this one garnering only pleasant chuckles and very few guffaws, but it nevertheless proves a rather consistently enjoyable and—like the usual Pearl revival—mostly respectful revival. I say mostly because I noticed that Sheridan’s line about “bearded like a Jew” has been changed to “bearded like a goat” out of deference to possible objections, even though there’s nothing inherently anti-Semitic in the phrase. If the word “Jew” is going to be so objectionable one wonders what nightmares were caused by the name of one of the more prominent serving men, Fag, which remains untouched.
Director Hal Brooks (recently named the Pearls’ artistic director) stages THE RIVALS with speed and flair in a more or less accurate semblance of its original look, with sets of beige flats representing interior walls lined up on either side of the stage and a similar backdrop at the rear. Chandeliers hang overhead, as they would have in the 18th century. However, probably because of budget issues, designer Jo Winiarski uses the same set of flats throughout, whereas each of the play’s various locales would have been indicated separately by the sliding on and off of flats to either side as needed. Here, scene changes are indicated only by the placement and removal by servants of chairs and the like. An arch cut into the upper part of the backdrop is opened to reveal a blue sky early in the play so that, as two serving men provide exposition on the plot, the chief characters can appear and mime whatever it is that’s being discussed below, helping to introduce them in preparation for their actual appearances. Exterior scenes later in the play also make use of the arch to show the sky. The neutral setting places an extra burden on Sam Flemming’s excellent period costumes for color and visual variety; the lovely wigs worn by all the principals are an especially effective aid in recreating the era, as is, thanks to sound designer Jane Shaw, the sprightly harpsichord music used during the rapid scene changes. Jason Fassl’s lighting, which uses not only the chandeliers but old-fashioned footlights, further enhances the production’s visual appeal.

THE RIVALS was produced by the Pearl in 2003, with some of the same actors in it. Sean McNall played Captain Jack Absolute, Dan Daily played Sir Lucius O’Trigger, Rachel Botchan played Lydia Languish, and Carol Schultz played Mrs. Malaprop, as she does now. I didn’t see that production, but the very idea of a company with a history like the Pearl’s being able to draw on its talents over the years and allow them to explore other roles (or repeat the same ones) in plays like this is a testament both to the Pearl’s longevity and to its importance as the exemplar of a kind of New York theatre that—aside from the Pearl itself—no longer exists. Long may it thrive.