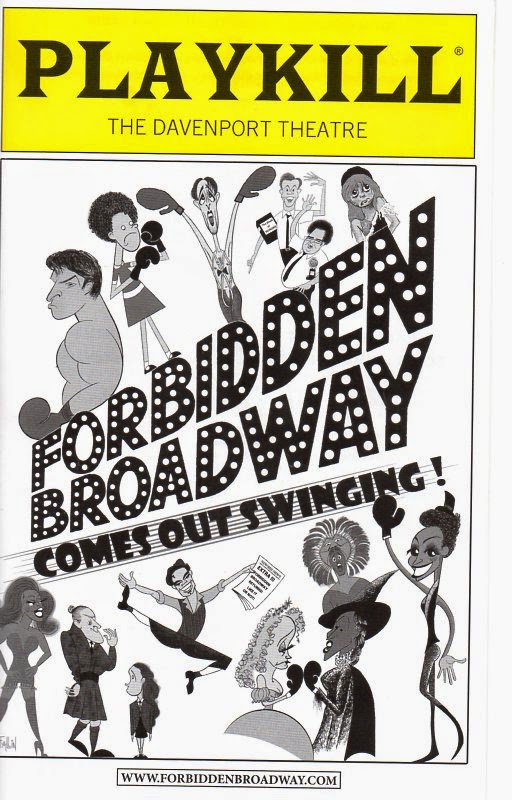 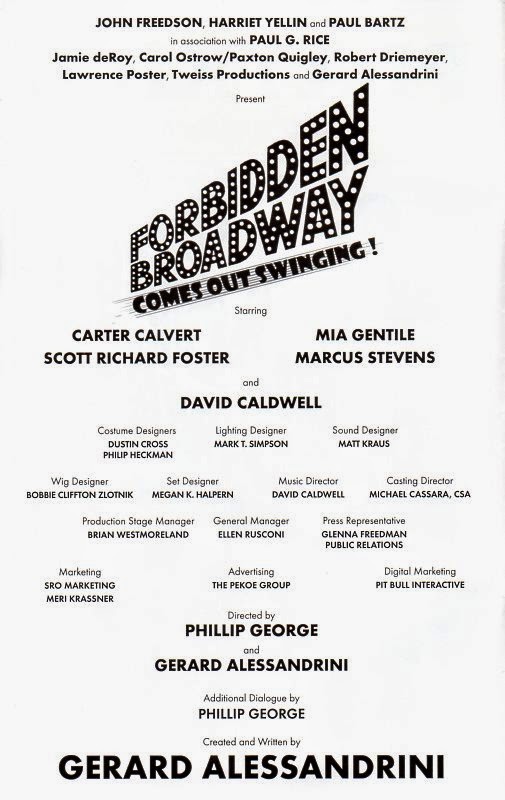 If you can make it here, as the song says, you’ll make it anywhere, but if you manage to make it on the Broadway musical stage you’re going to need the skin of a rhinoceros. That’s because the bigger you are the harder you’re bound to fall once FORBIDDEN BROADWAY, the Off-Broadway parody revue that’s been around in one form or another for three decades, gets its hilariously crabby little hands on you. FORBIDDEN BROADWAY COMES OUT SWINGING!, the latest gloves-off incarnation of Gerard Alessandrini’s on again, off again series, spoofing Broadway’s best and brightest (and those of less brilliant wattage), is on again, this time at the newly renamed Davenport Theatre, formerly the 45th Street Theatre. 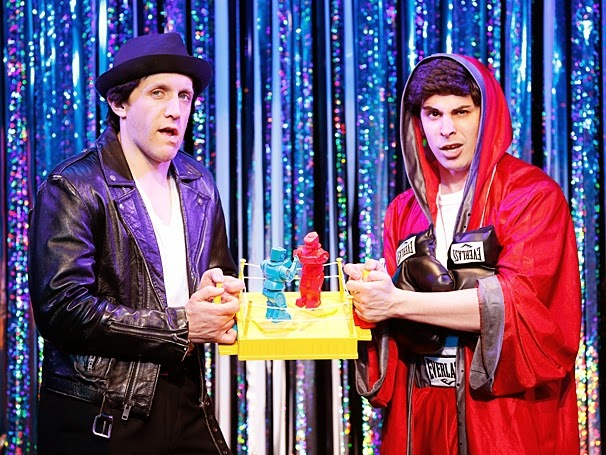 
There are no sacred theatre cows when it comes to FORBIDDEN BROADWAY’s targets, or rather, the more sacred a performer or a show, the more likely is it to become asphalt ready to be flattened by this steamrolling phenomenon. The ensemble consists of four fiercely versatile singer-clowns, two women (the blonde Carter Calvert and Mia Gentile) and two men (the fair-haired Scott Richard Foster and the dark-haired, gap-toothed Marcus Stevens). They play on a tiny stage before a multicolored curtain of shiny streamers whose rainbow hues—thanks to the expert lighting of Mark T. Simpson—change brilliantly from number to number; pianist-music director David Caldwell accompanies them up left beneath the familiar FORBIDDEN BROADWAY sign. One number follows the other in rapid succession as the actors dash off into the wings to make quick costume, wig, beard, and prop changes, allowing them to roll and rock through nearly two dozen routines, turning Broadway icons into theatrical roadkill (but all in good fun!). Dustin Cross and Philip Heckman created the costume knockoffs, some of them accurate reproductions and others broadly stated jokes (like the fat suit worn by Mr. Stevens when he impersonates Harvey Fierstein).
The show’s mostly new edition takes comical pot shots at PIPPIN (a deliberately klutzy circus number); MATILDA (which jibes at the exploitation of kids in shows like BILLY ELLIOT, ANNIE, and MATILDA); CINDERELLA (Fran Drescher’s [Ms. Calvert] Queens-girl nasality takes a laugh-worthy hit); THE BRIDGES OF MADISON COUNTY (with adulterous lovers Francesca [Ms. Calvert] and Robert [Mr. Scott] belting “You and I Have Just One Sex Scene”—instead of “Just One Second”); ROCKY (in which the inarticulate Sly Stallone [Mr. Scott] teaches Andy Karl as Rocky [Mr. Marcus] to be less coherent, and a handheld toy boxing ring subs for the full-size Broadway version); ALADDIN (which burlesques Disney shows, with Mary Poppins [Ms. Calvert] making an unexpected appearance); LES MIZ (which lampoons the current rage for projections, and with actors dressed as turntables to lament the new revival's lack of one: “I’m the turntable from LES MIZ; now they’ve fired me from the biz”); ONCE (“We’re so unpretentious that now we’re pretentious”); THE SOUND OF MUSIC (a shot at the recent TV version, with country-accented, amateurish Carrie Underwood overshadowed by five-time Tony winner Audra McDonald [Ms. Gentile]); THE BOOK OF MORMON (renamed “The Book of Morons," and featuring Mr. Marcus as Matt Stone and Mr. Scott as Trey Parker); BULLETS OVER BROADWAY (Broadway's seemingly annual show set in the 1920s, featuring Susan Stroman [Ms. Calvert] and Woody Allen [Mr. Stevens] parodying Cole Porter with “Let’s Misdirect”); CABARET (a Michelle Williams [Mia Gentile] and Liza Minnelli [Ms. Calvert] faceoff in this “revival of a revival”); and KINKY BOOTS (presenting Cyndi Lauper [Ms. Calvert] celebrating her Tony win by singing “Girls Have Finally Won," along with avatars of Harvey Fierstein [Mr. Stevens]; Neil Patrick Harris [Mr. Scott] as Hedwig; and Stark Sands [Ms. Gentile]). Also amusingly teased—with Ms. Gentile as a Teresa Brewer-like singer singing “Put Another Nickel In”—is a quartet of jukebox musicals (MAMMA MIA, JERSEY BOYS, MOTOWN, and BEAUTIFUL).


In addition to the stars and creators of these shows being brought down from the flies, there are big numbers aimed solely at mimicking and mockingly mutilating such supernovas as Idina Menzel (poked by Ms. Gentile for being loud and whiny), Mandy Patinkin (jabbed by Mr. Stevens for his self-importance), composer Jason Robert Brown (skewered by Mr. Stevens for his egotism), and, in a knockout moment, Liza Minnelli, given a devastating, but affectionate, scorching by the flat-out terrific Ms. Calvert singing about Liza's career to the tune of CABARET’s “So What?”
Several numbers don’t go for the jugular of particular artists or shows so much as they aim for larger ends.  Most memorable is the number inspired by the Nazi anthem in CABARET, in which the performers appear in business attire, each with corporate logos on their armbands and carrying attaché cases, to demonstrate Broadway's takeover from independent producers by huge corporations, such as Disney, American Airlines, Chase, and Chrysler: “Groundbreaking theatre is finally dead/And Broadway belongs to me.”
Mr. Alessandrini’s lyrics, set to the best-known songs from the shows on the execution block, are as scintillatingly clever as ever. Some of the material, as usual, is a little too broad, and the laugh meter registers a bit unsteadily here and there, but that so much of the show not only makes you smile but burst out laughing is a tribute to Mr. Alessandrini’s verbal talents and directorial skill, the latter job shared with Phillip George.
As always, FORBIDDEN BROADWAY’s good natured but ice pick-sharp puncturing of the pretensions and aspirations of the Great White Way plants in your brain the festering reminder, when watching a new musical, to keep an eye out for future satirical fodder. If you’re a Broadway devotee with a taste for this kind of benign nastiness, you’ll find FORBIDDEN BROADWAY very tasty, even if your favorite shows get seriously broiled. When this show gets out its knives and forks, it's Broadway that reaches for the Tums.