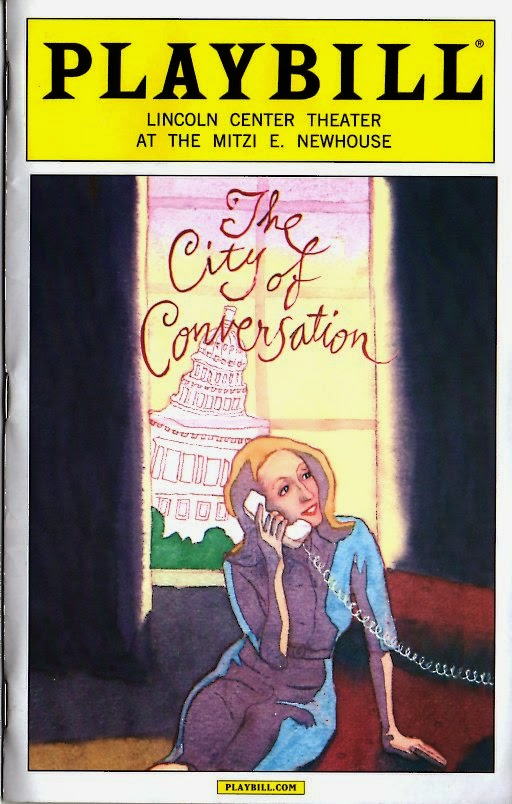 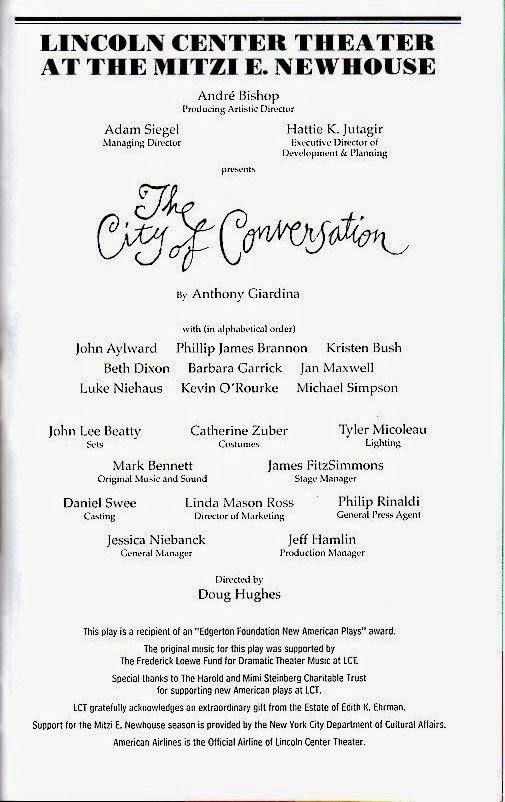 How often can you expect to see a play the majority of whose dialogue concerns American politics, and find your eyes brimming over with tears throughout the final scene? For all its power and importance, I don’t think you’ll have such a reaction at ALL THE WAY, Robert Schenkann’s hit play about President Johnson. There’s a much stronger chance you’ll be thus affected, however, by Anthony Giardina’s intense, emotionally moving, yet often extremely funny THE CITY OF CONVERSATION, being given a superlative performance at Lincoln Center’s Mitzi E. Newhouse Theater. This is because the political arguments, for all their intrinsic interest, are the catalyst for a family drama in which differences in beliefs, and the conviction with which these beliefs are held, can rip loved ones apart. A similar drama could conceivably be written about other ways, such as religion, in which we choose to disagree with one another. Thankfully, Mr. Giardina has found a splendid way to use politics as his background, and the results make for first-rate dramatic fireworks. 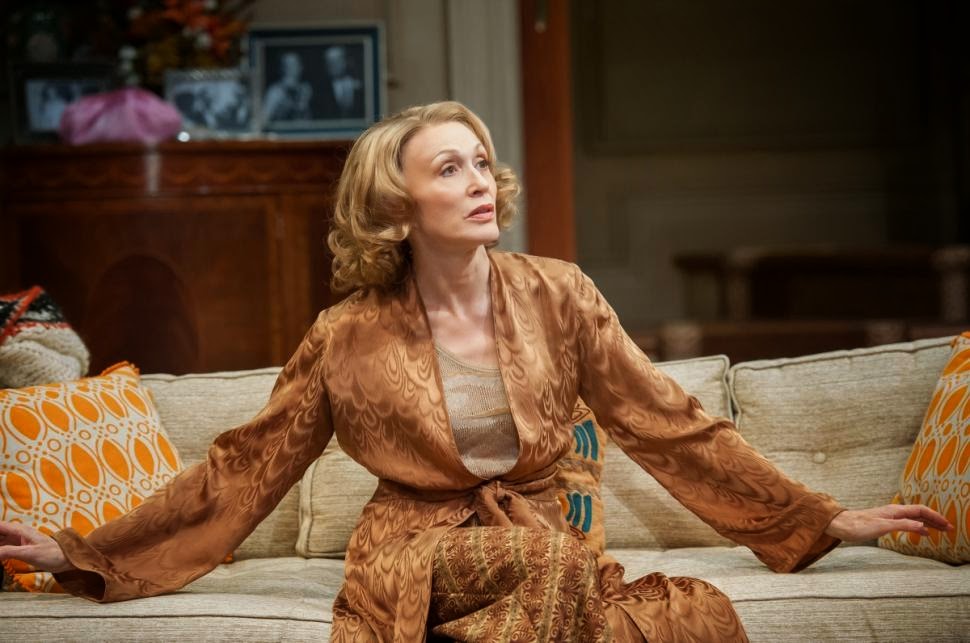 Jan Maxwell. Photo: Stephanie Berger.
Jan Maxwell rises yet another step higher in the echelons of New York’s top stage actresses in the role of Hester Ferris, a glamorous, left-leaning, Pamela Harriman-like Washington hostess. Her dinner parties are known for their ability to bring politicians of disparate stripes together in congenial surroundings that allow them to work out differences in a bipartisan way that the more hostile world of Capitol Hill offices and conference rooms makes difficult. Into Hester’s exquisitely appointed Georgetown townhouse (designed by John Lee Beatty, at the top of his game) arrive Hester’s son, Colin (Michael Simpson) and his beautiful , blonde fiancée, Anna Fitzgerald (Kristin Bush), both of them just having graduated from the London School of Economics, and ready to join the Washington establishment. But, it soon turns out, Anna holds conservative political views and Colin, despite Hester’s liberal stances, has gone over to the other side. 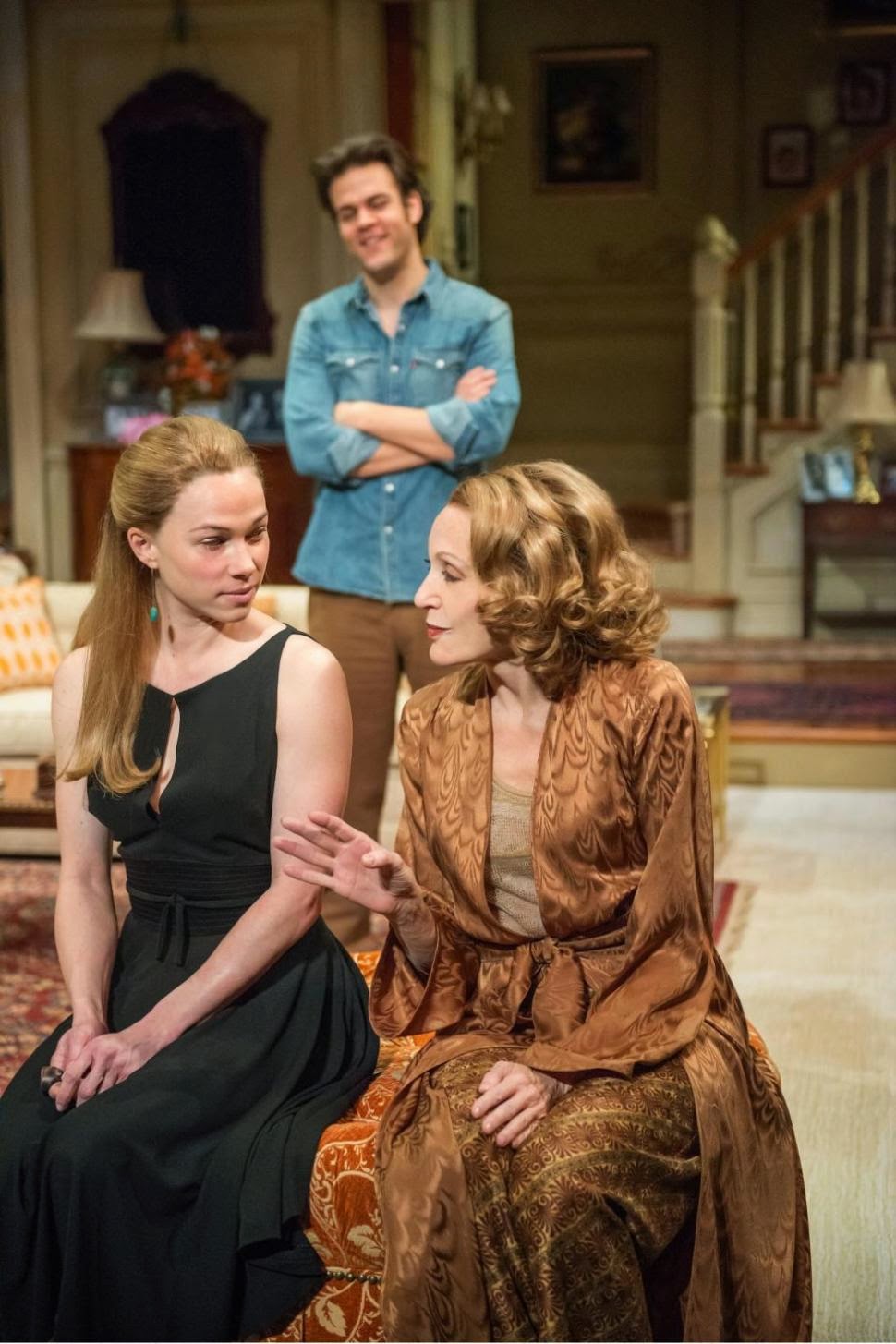 
The first of the two-hour play’s three scenes takes place in September 1979, during the waning days of the Carter presidency, damaged by his speech on American "malaise," when Hester is involved in efforts to support Ted Kennedy’s bid to challenge Carter for the Democratic nod. She's hosting a dinner for Kentucky Senator George Mallonee (John Aylward), a Republican, hoping to get him to sign a bill put forward by Senator Kennedy. The play then moves forward eight years to October 1987, during the Reagan years, when the issue at stake is the nomination of Judge Robert Bork as Associate Justice of the Supreme Court, a choice viewed as anathema by Hester, but strongly supported by Colin and Anna, now his wife; both hold jobs in the Republican administration  (he as a New Hampshire senator's staffer, she in the Justice Department) and angrily object to Hester’s doing all she can to torpedo the appointment. So vehement is their conflict that--in a precarious turn toward melodrama--the couple use their six-year-old son, Ethan (Luke Niehaus), the apple of his grandma’s eye (and the target of her political lessons), as a pawn to get their way. 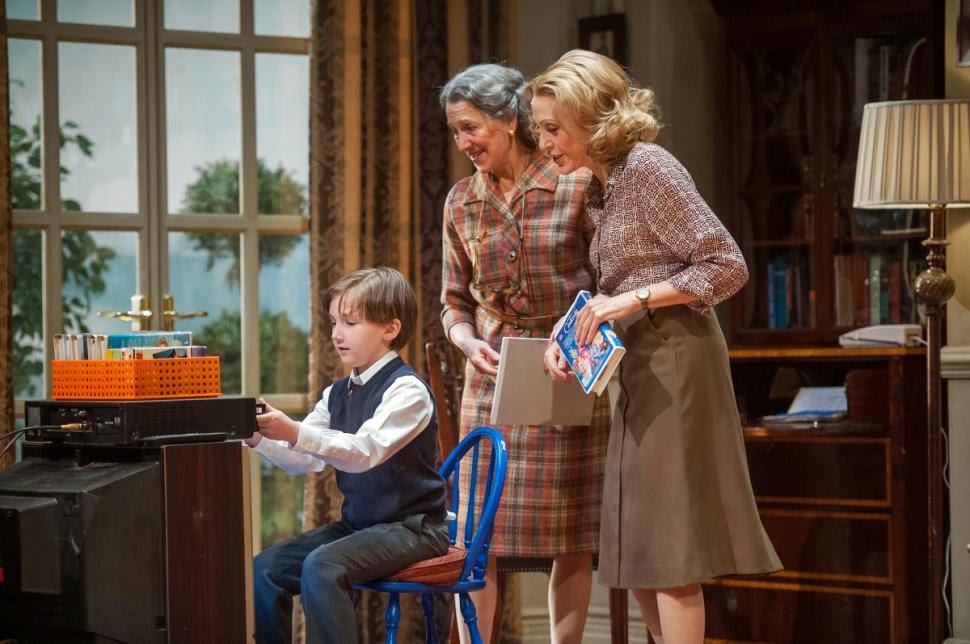 In the final scene, set in January 2009, it’s the evening of President Obama’s inauguration, and Ethan (played by Mr. Simpson), now an award-winning, 27-year-old Bronx schoolteacher, has come to Washington to attend one of the inauguration parties. He and his partner, Donald Logan (Phillip James Brannon), a black doctoral candidate writing his dissertation about the decline of modern liberalism, stop by to visit Hester, whom Ethan hasn’t seen in over two decades. Hester, despite her advanced age, remains as feisty as ever, and, given her constant battles on behalf of the rights of gays, blacks, and women, the occasion of Obama’s election offers considerable opportunity for reflection and reconciliation.


The play, whose time spanning structure recalls Richard Greenberg’s THE ASSEMBLED PARTIES of the 2012-2013 season, sizzles with pointed political repartee as liberals and conservatives spar with one another. Mr. Giardina captures the increasing divisiveness in American political discourse over the past 40 or so years; once we get into the Reagan years, the air virtually reeks of acrimony and disgust, making for some superheated arguments. Ms. Maxwell’s opinions about Judge Bork spew forth with raw fury and frustration, but while Mr. Giardina tries to give the conservatives some humanity, they are dangerously close to being mere straw men set up for liberal self-congratulation. As a liberal, I was delighted by the one-two punches landing on the opposition’s chin but always with the awareness that the set-up was rather artificial, and that any audience member who stood on the red state side of the aisle was probably squirming and ready to put on the gloves.


This inclination to arrange matters to favor Hester’s positions becomes most apparent in the final scene. Much as Hester and Ethan’s reunion and rapprochement is deeply touching, it’s hard not to  notice the playwright’s manipulations in having Ethan turn out to be gay (hinted at earlier when the six-year-old Ethan’s choice of videos is CINDERELLA), with his partner a black historian of modern liberalism, and in having Hester forcibly support the couple’s plans to marry. There’s a mechanical predictability here that simply seems too convenient.


But this is a play, after all, and its ultimate test is how deeply it affects you while you’re watching it. THE CITY OF CONVERSATION, crisply directed by Doug Hughes, is absorbing from beginning to end, even as you’re noting various artificialities along the way. It’s the kind of play whose quality registers so quickly that you can barely wait for the intermission to share your enthusiasm with someone else. Mr. Giardina has excellently encapsulated the principal issues he confronts, and he has put richly listenable words in the mouths of all his characters. Ms. Maxwell’s Hester dominates, of course, with her fashionable clothes and hairstyles; her salty defense of her ideas; her love for her son (despite being fully aware of his mediocrity); her deep devotion to her grandson; and her rancorous attitude toward her ambitious daughter-in-law, whom she compares to the title character in ALL ABOUT EVE.


Kristin Bush as Anna gives a razor-sharp picture of a politically savvy, ruthless charmer, dodgy and seductive at the same time; ultimately she becomes head of the National Endowment for the Humanities (referred to by Hester with cutting sarcasm on the final word). As Jean Swift, Hester’s Arkansas-accented sister and general factotum, Beth Dixon’s adept underplaying offers a perfect balance to Ms. Maxwell’s dramatics. Michael Simpson does a fine job as Colin, but his grown-up Ethan remains too close to his portrayal of his father in scene one. There are well-honed performances by Mr. Aylward as the Kentucky senator; Barbara Garrick as the senator’s snide, bluegrass-accented wife; Kevin O’Rourke as Chandler Harris, the attractive politician with whom Hester is having a longtime affair; and Mr. Brannon as Ethan’s partner.


Although Mr. Beatty’s living room set makes a strong impression, its appearance in 2009 doesn’t seem much altered from that of the earlier years. Even the old, boxy TV, situated in an unlikely corner of the room, is the same, which seems unlikely given Hester’s continued interest in public affairs. Catherine Zuber’s costumes are effective for 1979 and 1987, but Ms. Maxwell’s appearance in the 2009 scene as a dowdy old crone in a terrible wig that makes her look like Norman Bates’s mother in PSYCHO seems surprisingly inappropriate for a woman always so particular about her appearance. It’s one of the few wrong notes in what is otherwise a visually satisfactory production.


THE CITY OF CONVERSATION makes palpable the old saw about how “all politics is personal.” Audiences will appreciate it for its tangy talk, its fine ensemble, its political attitudes (provided you share them), and its reflection of why, increasingly, family get togethers are often prefaced with, “please, let’s not talk politics.” I suspect it will stir some conversations of its own, regardless of which city you see it in.
Posted by Samuel L. Leiter at 6:14 PM