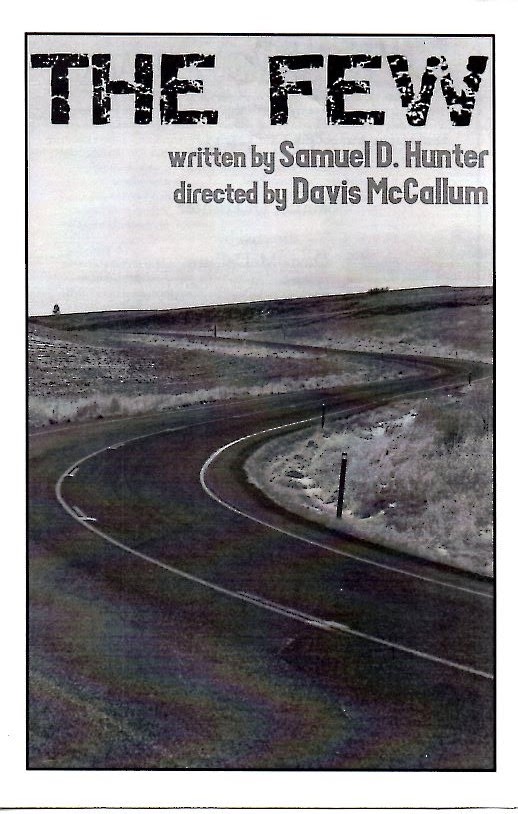 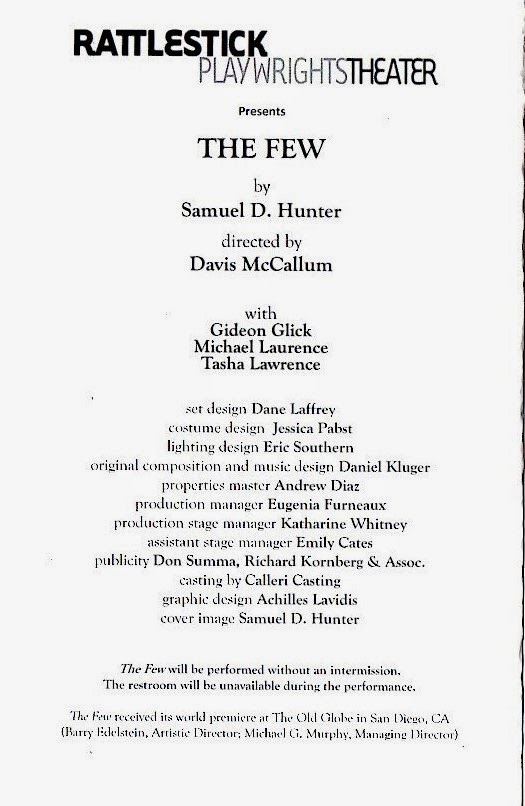 Unlike THE WHALE, Samuel D. Hunter’s fascinating play of last season about a 600-pound man, there are no physically unusual specimens of humanity on display in his poignantly dramatic but occasionally hilarious new romantic anti-romantic work, THE FEW, directed by Davis McCallum at the Rattlestick Playwrights Theater. THE FEW received its world premiere at the Old Globe in San Diego last year, also with Mr. McCallum at the helm. Like THE WHALE, however, the central concern of this 85-minute, intermissionless piece is the need of an emotionally wounded man to reach out and find some sort of redemption for his past behavior and to reconnect with someone from whom he’s been estranged. THE FEW is about caring, and how essential it is to have others in our lives, even at the expense of pain and disappointment. 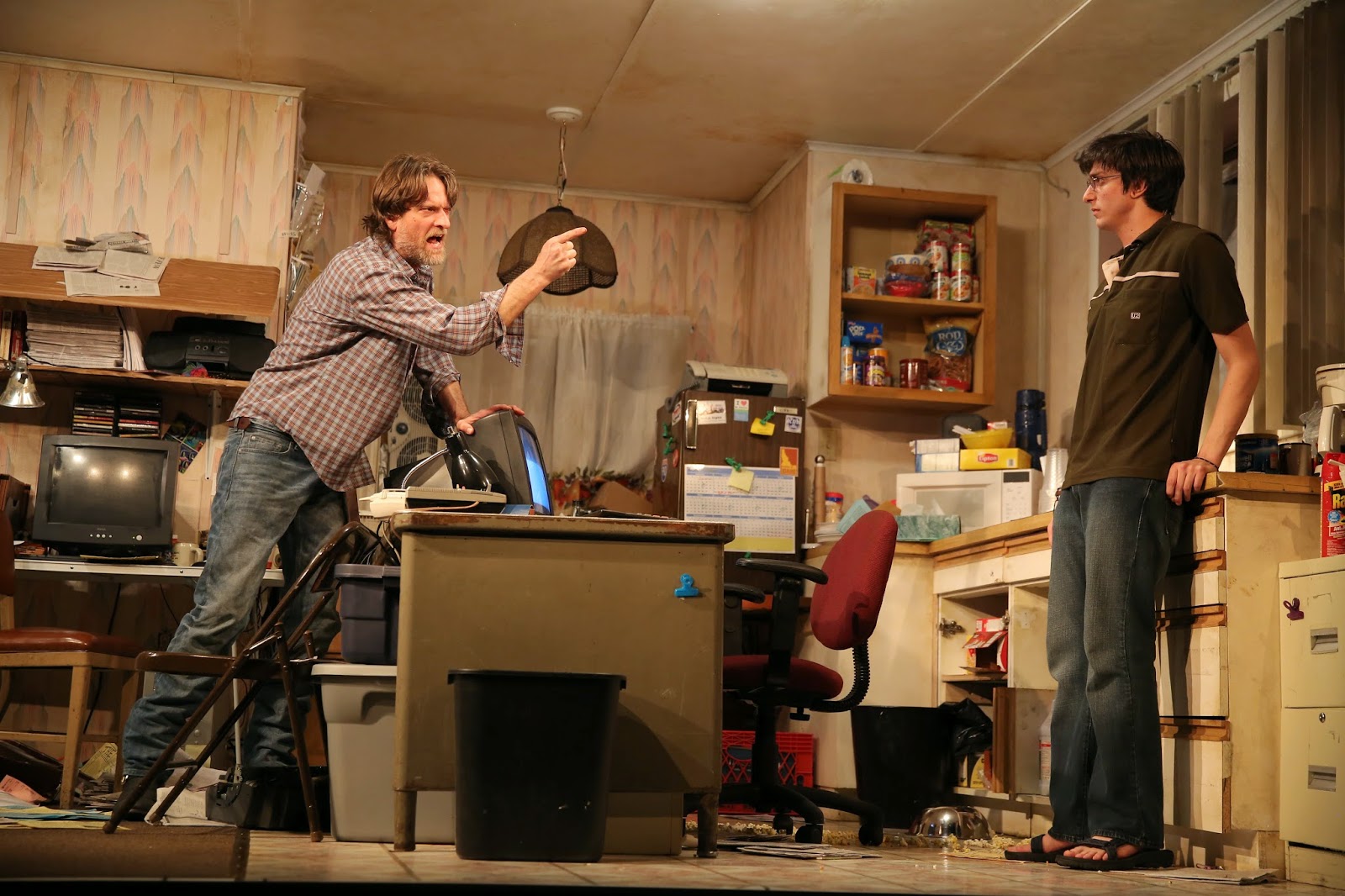 
The man in question, Bryan (Michael Laurence), is a scruffy ex-trucker who cofounded a trucker’s newspaper, The Few, in northern Idaho, with his friend Jim and a woman named QZ (Tasha Lawrence). Its inspiration was the belief that long-range driving causes truckers (like Jim and Bryan) to lose the very sense of their existence (“Like you’re never in one place long enough even to exist”), while the sense of communion with other humans gradually vanishes. Such feelings of alienation, of which Jim especially was a victim, needed to be expressed in a way that spoke directly to truckers and let them know they existed. But, after Jim’s death (the truth about which comes out in a big reveal), Bryan suddenly left for parts unknown, leaving the paper and a load of debt in the hands of the broken-hearted QZ, who loved him. 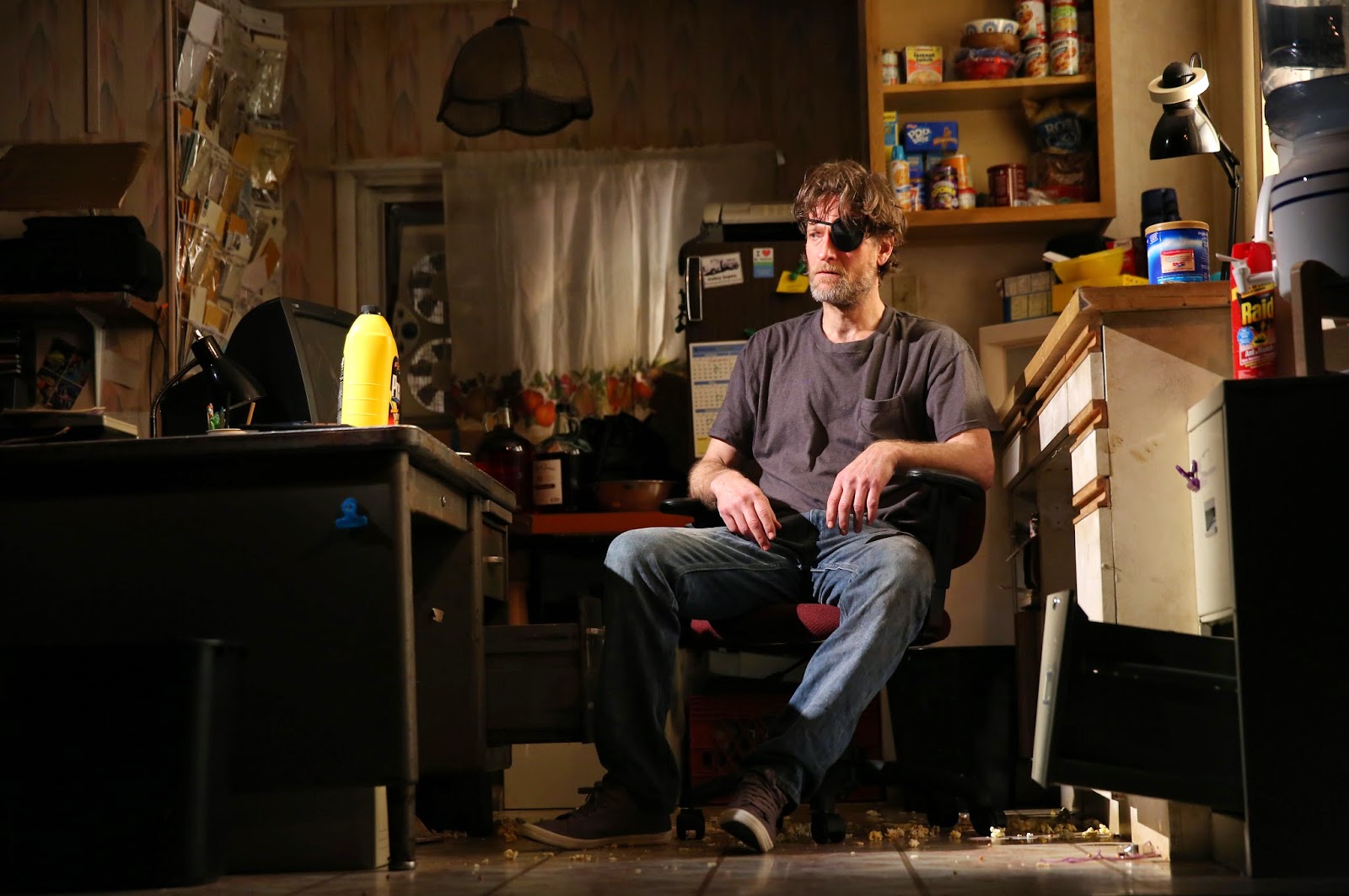 
Now, after four years, Bryan has returned, unannounced, claiming he's broke and in need of a place to stay. It’s August 1999, a time of potential chaos mingled with the promise of a new millennium; this was when the world feared the possible effect of the Y2K bug. QZ, who has been having an epistolary relationship with a certain Rick, who proposed to her, is upset by Bryan’s presence, but she allows him to sleep at the office for a few days (although he claims legal ownership of the place). During his absence, QZ hired a teenage geek, the nervously nerdy Matthew (Gordon Glick), a gay 19-year-old who got interested in The Few because of Bryan’s columns and has long idolized him.


QZ has managed to make the paper profitable by abandoning trucker stories and emphasizing instead personal ads. Throughout the play, the answering machine keeps playing messages left by those placing ads, each of which, in its own way, underlines the sense of loneliness pervading the lives of Bryan, QZ, and Matthew. The messages often serve as a mildly ironic counterpoint to the regular dialogue. Bryan, who smokes and drinks, does his best to ignore, even snub Matthew (who claims to be allergic to tobacco and alcohol). But, much as Bryan might like him to disappear, Matthew shyly\slyly manages to stick around. Matthew, who has a poetic streak of his own, wants Bryan to write essays for truckers that would return the paper to its original purpose; he believes Bryan spent the past four years gathering material about the heart of America.
Eventually, Bryan will confess the real reason for his return; Matthew, who will take matters into his own hands using a BB gun, will learn some life lessons; Bryan and QZ will tussle over their different visions of the paper and their personal relationship; a jug of antifreeze will join the action; and people will keep calling The Few as—like Matthew, Bryan, and QZ—they reach out for someone to love. One such caller provides the play with what reads in the script like an optimistic ending; in Mr. McCallum’s staging, however, the result is ambiguous.


The Rattlestick often provides sets of greatly detailed naturalism, such as the one designed by Dane Laffrey for THE FEW. It shows the newspaper office, a shabby affair, stained ceiling and all, located in what could be a truck’s disused trailer. The joint is overflowing with office junk, including big old computer monitors. A red floppy disk even makes its appearance at one point. Aiding and abetting this thoroughly convincing interior is the sensitive lighting of Eric Southern, giving a true sense of the always changing time of day. Jessica Pabst's costumes and Daniel Kluger's music and sound design round everything out perfectly.
Mr. Hunter’s vernacular is crisp, smart, and authentic-sounding in the mouths of whoever speaks it, including the wide variety of people leaving personal ads , some of them unsure of how to do so. This one closes scene 3: “It’s, uh—. Wait what am I supposed to—? Uh, Trent, I’m in—. Why do you need my phone number? Look don’t print my name. Truckers call me Bent Nickel, just print that. No, uh, actually don’t print that, just print—hot trucker. Print hot trucker seeking—” And those with fully prepared statements are always oddly realistic enough to capture your attention:  “Montana, 406-343-2043, my name’s Jessie. Full-figured woman with big breasts looking for man. Just got out of an L-T-R, looking to start a new one. I don’t know how to swim. Send me a message and we will meet and see what happens. Please only men interested in large-breasted women.”


Mr. Laurence acts Bryan with much the same  haunted sense of disillusion, depression, and self-loathing that Jon Hamm brings to “Mad Men.” Having returned to his former job and partner in obvious distress, and given the chance to work (with reduced authority), Bryan struggles to retain his sense of dignity even when suffering abject humiliation, although this forces him to be crueler to Matthew than he intends. Gordon Glick’s Matthew is a bundle of physical and verbal tics that vividly express his awe of Bryan, his repressed ideals, and his ultimate loss of control. And the feisty Ms. Lawrence’s QZ is every bit the cynic whose heart was crushed when Bryan left following Jim’s funeral and who refuses to let it happen again. 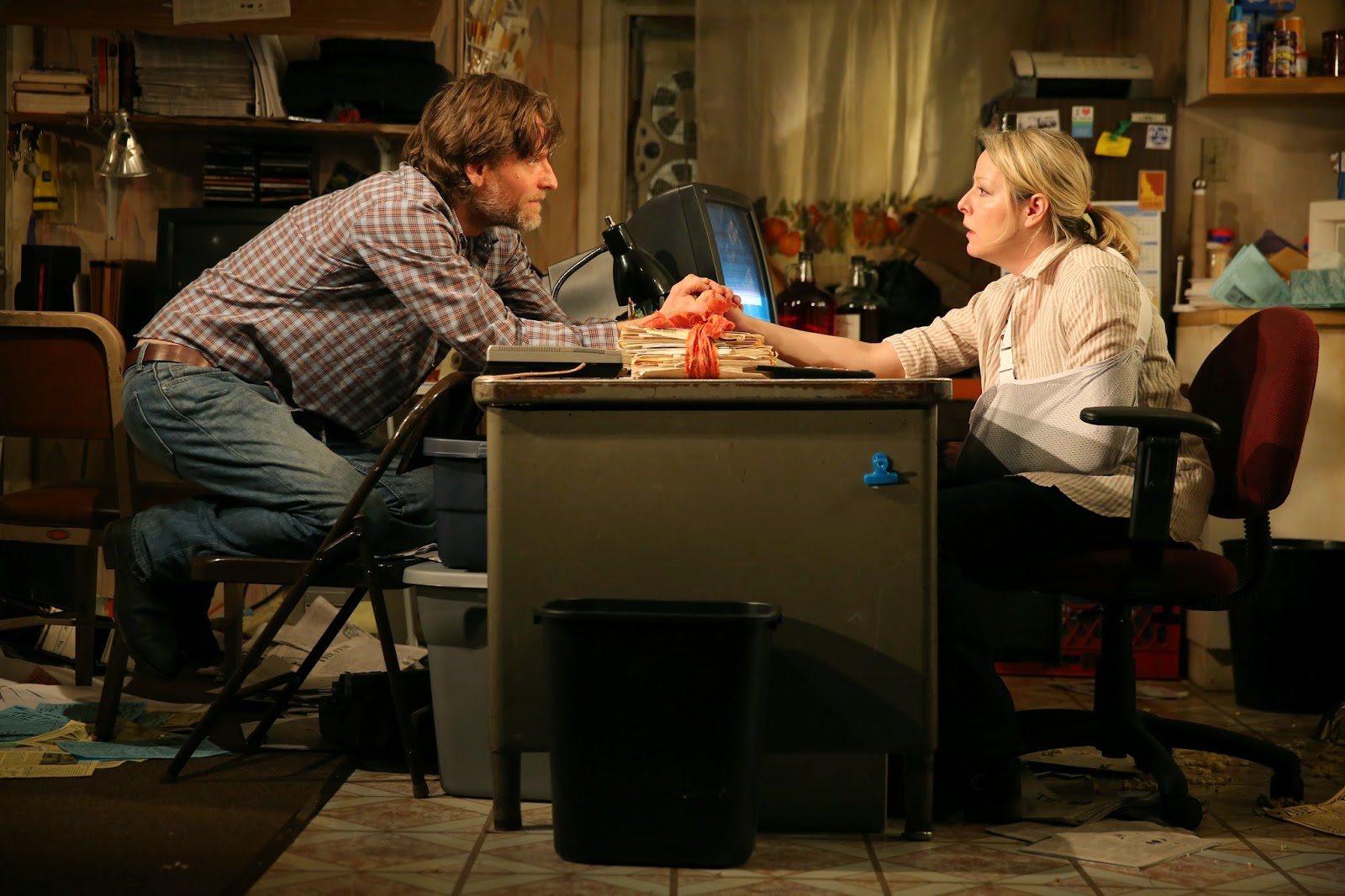 There was a technical mishap that delayed the start of THE FEW on opening night. The actors had taken their places in the darkness but there was a problem with the electrics and, after an announcement, the lights popped up again, catching the actors rushing off to get ready to start again. A few minutes later, the problem was fixed and the play started once more, but this time everything went so smoothly that you were quickly immersed in the action and the glitch was practically forgotten. The audience at the intimate venue, which included many theatre professionals, was so grateful for the unbroken focus of the fine three-person ensemble, and the expert writing of Mr. Hunter, that each of the first few scenes received applause. Opening night audiences, which always include friends of the cast, tend to be effusive, of course, but the response at the final curtain was genuinely enthusiastic. There was no question that THE FEW had made an impact on more than a few people in attendance. It’s a small play and of a familiar type but it has enough originality in its way to make an even wider impact.
Posted by Samuel L. Leiter at 7:07 AM