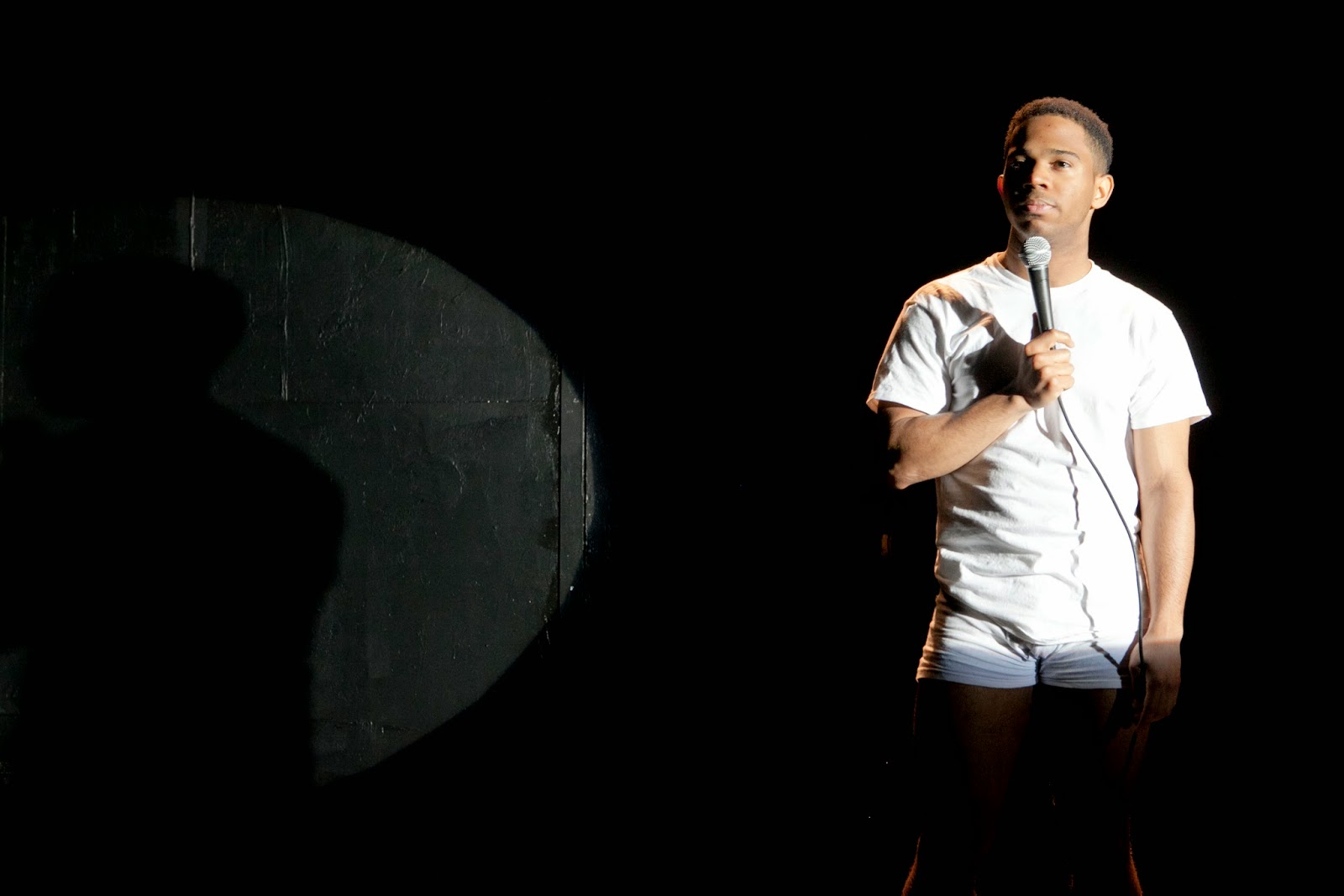 Forget, for the moment, DJANGO UNCHAINED and 12 YEARS A SLAVE. If anybody needs a reminder of why the Soho Rep is getting a special award this year from the Drama Desk they need only to visit the Rep’s current production of Branden Jacobs-Jenkins’s satirical take on American racial attitudes as seen through his reimagining of Dion Boucicault’s 1859 melodrama about slavery, THE OCTOROON (rechristened AN OCTOROON for this adaptation). The award, to be formally presented on June 1 at the annual Drama Desk Awards ceremony at the Town Hall, recognizes Soho Rep for “nearly four decades of artistic distinction, innovative production, and provocative play selection.” These attributes are outstandingly represented by this unusual presentation, staged with great inventiveness by the Rep’s artistic director, Sarah Benson. 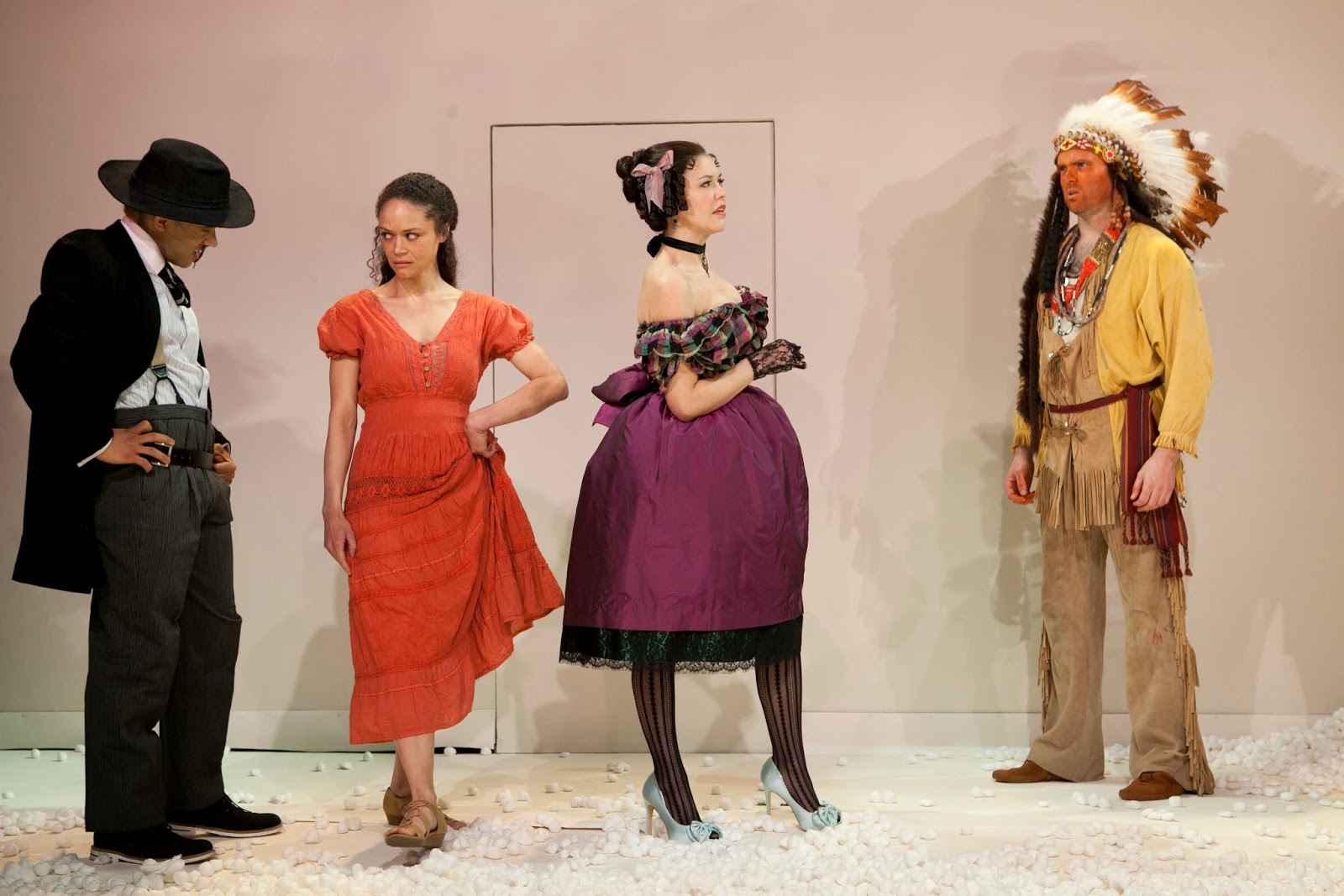 
Unlike the full-scale, historically accurate revival I saw at the Phoenix Theatre in 1961, this self-referential interpretation essentially deconstructs the play to examine its sociological heart. Mr. Jacobs-Jenkins, who introduces himself (through a character dubbed BJJ) as a “black playwright,” followed by the disclaimer, “I don’t know exactly what that means,” has a playful attitude toward labels. He also playfully, yet seriously, expresses concern about racial perceptions, as demonstrated by having a black actor perform in whiteface, a white actor in blackface, and another white actor in redface (as an Indian), with the remaining actors working with the colors God gave them. THE OCTOROON, the vehicle for the playwright’s often very funny, if sometimes vague, ruminations, on race, was one of the mid-19th-century’s most popular and controversial melodramas, set on an antebellum Louisiana plantation, Terrebonne.
It tells a story centered on the attempts of a wealthy but villainous plantation owner, Jacob Mc’Closky (Chris Myers), to gain possession of the financially troubled Terrebonne as a way of acquiring Zoe (Amber Gray), the beautiful octoroon (1/8 black) slave for whom he lusts. The play is filled with dramatic action, including a major plot development having to do with a self-developing camera owned by McClosky’s romantic rival, George Peyton (also Mr. Myers), the European-bred, British-accented nephew of Terrebonne’s aged owner, who loves and is loved by Zoe, although a flirtatious neighbor, Dora (Zoë Winters), also has George on her mind. George and Zoe’s love is verboten, though, because of her tiny dollop of black blood (signified, she declares, by the hint of blue near the quick of her nails and in her eyes). Nearly everything in Boucicault’s play has something to do with racial attitudes, by whites toward blacks, blacks toward whites, whites and blacks toward an Indian named Wahnotee (Danny Wolohan), and vice-versa; Mr. Jacobs-Jenkins’s treatment injects a modern point of view into this material.
Marsha Stephanie Blake, Chris Myers. Photo: Pavel Antonov.


The dramatist (whose APPROPRIATE stirred some buzz during the past season) uses substantial chunks of Boucicault’s original, eliminating or eliding various characters and sometimes giving their lines to others, but essentially retaining THE OCTOROON’s structure, essential dialogue, and major plot points, including a climactic slave auction. The slave characters speak both Boucicault’s dialect-heavy lines, with their 19th-century manner of representing black speech (at a time, of course, when blacks were played by whites in blackface), and present-day black dialect. The latter is heard in interpolated scenes, much of it spoken by two female slaves, Minnie (Jocelyn Bioh) and Dido (Marsha Stephanie Blake), with all the comic sassiness you might expect from young women raised in the ghetto. The irony, of course, lies in their being slaves who look on their situation not as a horror but as jobs. One of the show’s most brilliantly funny yet provocative moments comes when they parade for their potential buyers as if strutting in a beauty pageant.
Amber Gray, Zoë Winters. Photo: Pavel Antonov.


In addition to conveying Boucicault’s plot about love, lust, murder, and enslavement (the play was influenced by the classic slave drama of only a few years earlier, UNCLE TOM’S CABIN), Mr. Jacobs-Jenkins also explodes Boucicault's structure by introducing himself as BJJ (another role for Mr. Myers). In the opening scene, during which he'll put on whiteface, he addresses the audience in white underwear, recounting a discussion with his imaginary therapist (he can’t afford a real one) and telling us what led him to create this work. Joining him in a further extension into surrealism scene is the Irish-accented Boucicault himself (a.k.a. The Playwright [Mr. Wolohan]), with whom BJJ soon joins in a synchronized round of mutual “fuck you” insults. This kind of believably acted theatrical game playing occupies almost the entire fourth act, where the action is narrated instead of acted out as BJJ and the Playwright also stop to explain some of the principles of melodrama writing, a chief aim of which is to get the audience to feel something. AN OCTOROON certainly does that, multiple times.
Danny Wolohan, Marsha Stephanie Blake, Jocely Bioh. Photo: Pavel Antonov.
But the play has many other surprises as well; while it keeps you pondering where the playwright is going with his theatrical maneuvers, it allows you at the same time to be drawn emotionally into the tale of Terrebonne and Zoe. But it also offers diversions that take you down unexpected paths, such when an actor—unnamed in the program but rumored to be Mr. Jacobs-Jenkins himself—enters on various occasions, dressed in a long, plaid coat as a shambling-gaited Br’er Rabbit (based on19th-century illustrations, not as Disney showed him in SONG OF THE SOUTH), wearing a realistic, long-eared rabbit head. The rabbit doesn't participate in the plot, per se, but serves as a sort of stage assistant, stopping occasionally to look questioningly at the audience, almost always getting a laugh in return. His presence adds another touch of the bizarre to the proceedings, yet seems perfectly organic in the world that's been created.
Chris Myers, Danny Wolohan, Amber Gray. Photo: Pavel Antonov.


The eight-actor company (apart from Br’er Rabbit), makes use of doubling and tripling; in the final scenes, when McClosky and George must be on stage simultaneously, Mr. Myers rapidly changes positions so he can play them both. This culminates in a terrifically staged (by J. David Brimmer) fight scene between the two in which a large knife figures prominently. I suspect that Mr. Myers loses several pounds night from his tour de force acting and solo fighting. There are no weak performances here, each actor capturing just the right blend of realism and exaggeration for characters that range from the melodramatically stereotypical bad guy McClosky to the flighty  Dora to the old slave Pete to the truthfully tragic Zoe to the gossip-dishing slaves.


Mimi Lien’s setting also surprises. At first, seated on bleachers, you believe you’re facing a scenery-less black box space, with a simple door cut into the back wall, but when the opening scene is over, the entire wall suddenly falls forward, sending a gust of air toward you and revealing an identical arrangement in white behind it, including the floor (the rear side of the previous wall). Something similar will happen later in the play as well. Matt Frey creates outstanding lighting effects (including a strobe sequence) for the spare scenic backgrounds, while the costumes, designed by Wade Laboissonniere, are creatively re-imagined versions of mid-19th-century clothing, especially the colorful dresses worn by Zoe and Dora. As in a traditional melodrama, musical accompaniment is essential, and for AN OCTOROON César Alvarez has created excellent melodies that are mostly played by an onstage cellist, Lester St. Louis.


Putting together this mélange of old-time melodrama and modern theatricality needs the skills and imagination of a gifted director, and Sarah Benson must be loudly applauded for her achievement. The result is unlike anything now playing in New York, and, while the Mr. Jacobs-Jenkins’s precise intentions may sometimes prove slippery, AN OCTOROON succeeds on enough levels to make it essential viewing for any serious theatergoer.
Posted by Samuel L. Leiter at 4:52 PM