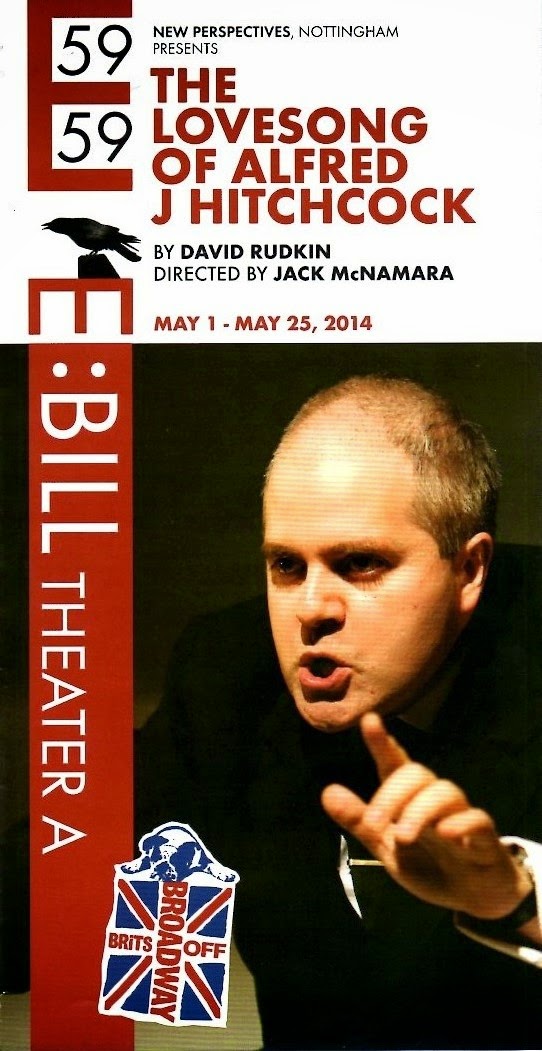 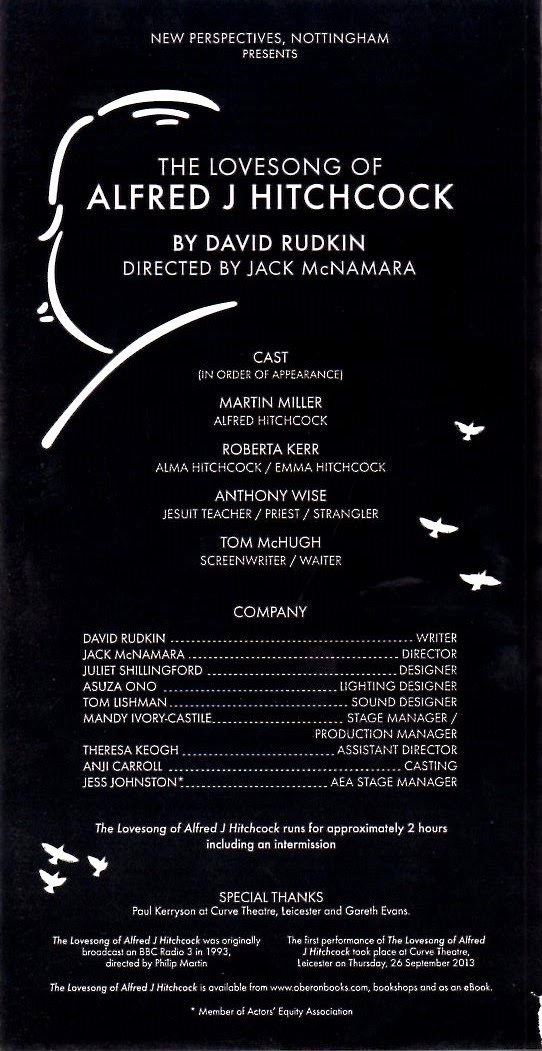 Great title, right? Unfortunately, David Rudkin’s play, being shown during the annual Brits Off Broadway Festival at 59E59, is not equally great; although written in blank verse, with brisk, telegraphese dialogue, it’s certainly not a theatrical equivalent to the T.S. Eliot poem whose title it appropriates. In fact, despite its receiving a number of strong reviews, I found it tediously undramatic, something only a devoted Hitchcockian or cinema buff could fully appreciate. 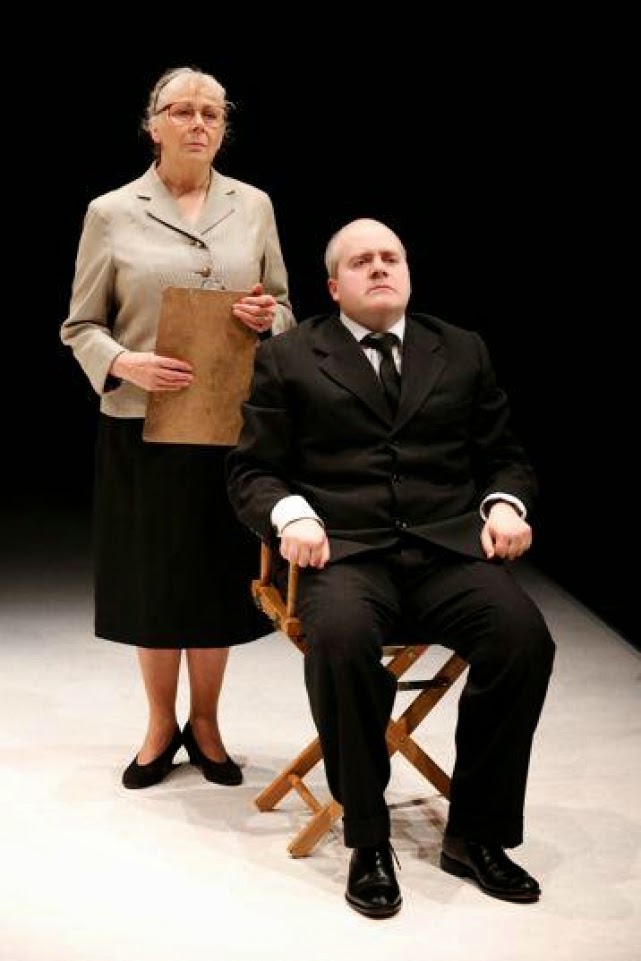 
The private life of Alfred Hitchcock has become rather public recently, what with movies about him starring Toby Jones (THE GIRL) and Anthony Hopkins (HITCHCOCK), both of whom were far more convincing as the portly English film director than the widely praised—and, despite padding, insufficiently portly—Martin Miller, who takes on the role in Rudkin’s drama. Unlike most other film directors, Hitchcock’s personality and presence are very well known because he cleverly exploited them as a way of increasing interest in his work. One of the delights of viewing his weekly TV series, “Alfred Hitchcock Presents” (1955-1965), was to see him walk on to the screen, accompanied by Bernard Hermann’s memorable theme music, to replace in the flesh an outline caricature of his protruding belly, drooping jowls, and pouting lower lip. But filmgoers already were familiar with what he looked like because of his habit of making very brief appearances in each of his films; going to a Hitchcock film was partly about getting caught up in the suspenseful tales he directed and partly about the game of finding Hitchcock, just as readers of the New York Times used to search for “Nina” in the lines of Al Hirschfeld’s caricatures.


Hitchcock’s personal appeal was also tied to his dryly droll sense of humor, deliciously edged in mortician’s black. This comical touch, however, is almost completely lacking in THE LOVESONG OF ALFRED J. HITCHCOCK, which Jack McNamara has directed from a script originally written as a “film for radio,” broadcast in 1993, and that was, as the playwright suggests, probably the first presentation of Hitchcock as a dramatic character. In 2012, the British company New Perspectives asked Mr. Rudkin to adapt his script for a touring production, but, having discarded the original script, he wrote a new version. Whereas in the first version, the only woman shown was Hitchcock’s wife (and collaborator), Alma, he now created the role of Emma, Hitchcock’s mother, to be played by the same actress (Roberta Kerr, excellent), suggesting through this device the Freudian connection between the two principal women in the director’s life.


THE LOVESONG OF ALFRED J. HITCHCOCK is a psychological biodrama written in nonlinear style, moving freely back and forth in time, to investigate how Hitchcock’s personal experiences at home and in school might have influenced the themes and subjects of his films, such as his seeming obsession with unattainable blonde heroines whose names often begin with “M” (his mother’s name was Emma, it might be noted) and who frequently ended up dead. There are five actors involved, each, apart from Mr. Miller, playing more than one role. References in the play to Hitchcock’s most famous films are allusive, forcing you to rifle through your memories to determine which one is being talked about (VERTIGO? NORTH BY NORTHWEST? MARNIE? THE BIRDS?); audience members with only vague, if any, knowledge of the director’s work will be at sea for much of the time and will wonder what all the fuss is about.


The essentially plotless, internalized drama is like a fever dream in which we view Hitchcock visualizing in staccato bursts the development of his representative images; his love-hate relationship with his mother, who scared him to death as a child, a possible motive for the horrible fates his heroines encountered; his obsession with his weight; his sexual insecurities; his collaboration with screenwriters; his concern about his name (during an exchange with a screenwriter [Tom McHugh] he says “I have no cock”—his nickname was “Hitch”); his wife’s attempt to come to terms with their relationship by writing a memoir; his struggles with his guilty conscience, and so on.


Scenically, the production is simple. Juliet Shillingford’s set is little more than an off-white, upstage screen, used mainly for fuzzy shadow play images; there are some brief verbal descriptions of moments from Hitchcock’s better-known films, but no actual clips are shown. Azusa Ono’s lighting offers effective visual shading to the general blandness, and Tom Lishman’s sound design provides the effects of birds, trains, theme music, and other sounds associated with Hitchcock’s work.


Hitchcock, of course, was famed as the great “Master of Suspense,” a notion nicely hinted at in a scene where the young Alfred is going to be punished by a Jesuit priest (Anthony Wise) at his school for breaking a window. The priest gives Alfred a choice as to whether he wants his caning now or at a designated time later in the day. Wishing to delay the pain for as long as possible, Alfred opts for the later time, and the priest then offers a detailed explanation of the way in which time seems to stretch as one waits for something to happen. It begins:


Look up: toward that clock there


The face of the clock


It overtakes the shorter hand beneath: . . .


Yet all this while, you’re thinking:


how is it time can pass at all?


How can that future, other moment ever be here:


when this second, this instant,


is lasting so long?


Well before THE LOVESONG OF ALFRED J. HITCHCOCK ended, I, too, wondered, how. How indeed? And that’s about as much suspense as the production musters.
Posted by Samuel L. Leiter at 1:19 PM