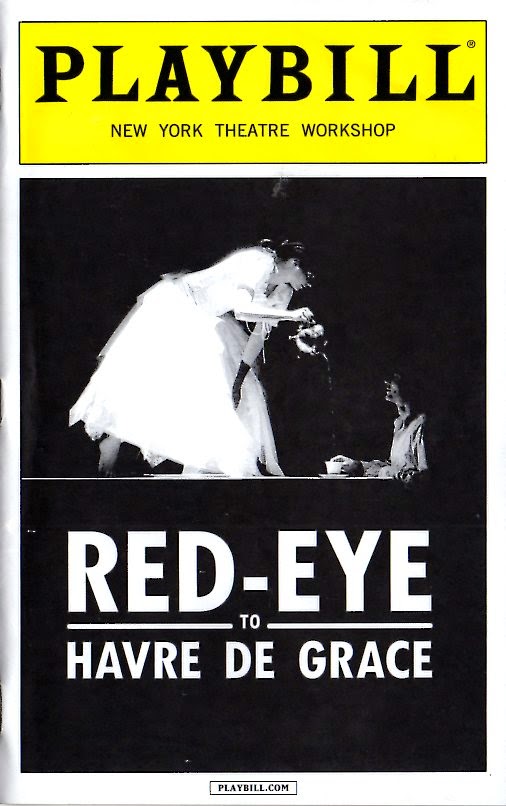 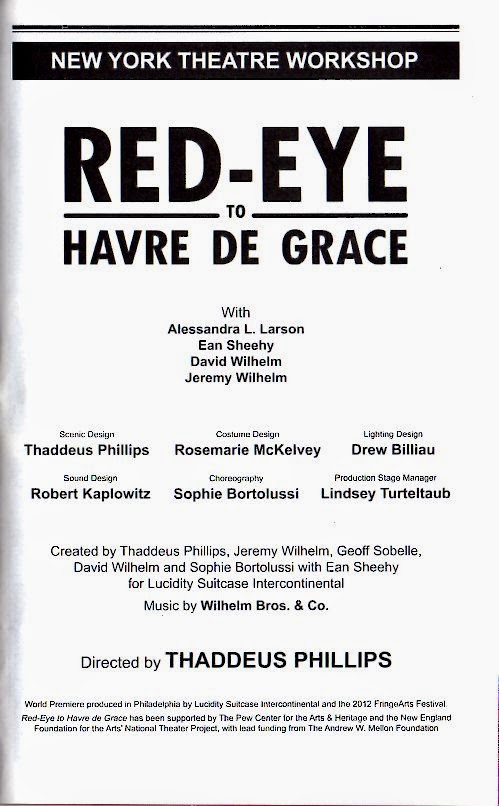 Once upon a Tuesday not so dreary, I wandered not so very weak and weary over to the New York Theatre Workshop, where RED-EYE TO HAVRE DE GRACE, a 90-minute, intermissionless, musical play, or play with music, about Edgar Allan Poe, is giving some visitors goose bumps. Poe, the 19th-century poet and writer of Gothic mystery tales, among other literary accomplishments, died under mysterious circumstances at 40 in October 1849, impoverished, laudanum-addicted (factually questionable), and mentally unbalanced, after being found in a Baltimore street wearing someone else’s clothes and being too incoherent to explain what had happened to him. The mysterious circumstances leading to his death inspired a group called Lucidity Suitcase Intercontinental to create this piece of devised theatre, which, according to the program, has been in development since 1996, with its principal progress beginning in 2004. Various collaborators came and went over this period, and a full version of the piece was produced in 2012 at the FringeArts Festival Philadelphia, with another staging being given at ArtsEmerson in Boston in 2014 before arriving on E. 4th Street in April.


The team officially credited with the work’s creation consists of Thaddeus Phillips, the director and set designer; Jeremy Wilhelm, who acts and sings in it, as well as playing the clarinet and guitar; his brother, David Wilhelm (the siblings are billed as Wilhelm Bros. and Co.), who plays the piano, upright and grand, and wrote the music; Sophie Bortolussi, who did the choreography; Ean Sheehy, the excellent actor who plays Poe, and looks very much the part; and Geoff Sobelle. What they've fashioned is a marvelously theatrical, non-linear, barely narrative-driven, sung, danced, and spoken performance, which, while definitely possessed of haunting beauty, failed to strike any deep emotional chord in me.


It uses a simple scenic environment of black and red curtains, three tables whose tops are made of doors, so the tables can be moved about by the actors to represent, by the way they’re angled, a multiplicity of locations; an old bed (first seen hanging from above); and various other things suggesting found properties. Drew Billiau’s highly imaginative lighting design makes abundant use of low intensity electric bulbs (even though they didn’t exist in 1849); combined with Robert Kaplowitz’s wide-ranging sound effects, many of them coming from the actors and musical instruments, they help evoke the nightmarish world at the heart of RED-EYE TO HAVRE DE GRACE. One of Mr. Kaplowitz’s gems is a recording of Neil Diamond’s “Done Too Soon,” in which E.A. Poe’s name is mentioned among those of other famous people who (mostly) passed away too young.


Poe married his 13-year-old cousin, Virginia Clemm, in 1835 (“It was a different time,” we’re told), but she succumbed to tuberculosis 11 years later; some of his most famous poems, such as “Annabell Lee,” were inspired by his grief over her loss. These are woven into the play, which is largely a tapestry of his writings, both poetic (like “Eldorado” and “Annabell Lee”—the latter sung in French) and otherwise, including “Eureka: A Prose Poem” (1849), whose pseudoscientific thesis bears a relationship to the big bang theory explaining the inception of the universe, although Poe never considered it anything but a work of art. Much use also is made of news accounts (including a verbatim account by a doctor who attended to Poe before his demise) and of Poe’s letters to his mother-in-law, “Muddy.” A vein of comic relief surfaces when, despite his interests lying elsewhere, the only thing anyone wants Poe to recite of his writings is “The Raven”; when he finally does it’s in a determinedly indecipherable tone delivered at warp speed.


To help the audience follow the literary allusions, supertitles are projected above the stage; when the poems are presented, it's usually in the form of song, although the singer is not the actor playing Poe but Jeremy Wilhelm, who plays multiple roles, all while wearing the khaki uniform of a National Parks Ranger named Steve. That’s because he serves as a sort of guide to the production, appearing at the start with a clipboard and pencil, Ranger hat on his head, as if he were introducing the play as part of his duties as a guide at Philadelphia's Edgar Allan Poe Museum. Speaking in dry, rapid, non-actorly speech, he seems every bit the friendly, quite humorous museum docent until he suddenly begins singing Poe’s “The Conqueror Worm” in a semi-operatic voice once the action of the play proper begins. In the main, the piece is a dark, feverish vision of how Poe presumably spent his last days. These are mostly aboard a train he mistakenly took to Havre de Grace when he thought he was headed for New York on a speaking tour.


Among the visually compelling takeaways is the speechless but marvelously expressive dancer Alessandra L. Larson, dressed in filmy white (the costumes are by Rosemarie McKelvey), who represents the dreamlike spirit of Poe’s late, beloved wife, and who appears in a variety of sinuously odd ways to dance with Poe, often winding herself around him in surprising configurations choreographed by Ms. Bortolussi; at another point, dressed in a flaring red gown, and fitted with stilts, she does a flamenco-inspired dance with him. At one point, after Poe has sat down and placed a piece of grass-like carpeting under his feet, she appears from under the floor through slits in the matting, an image reminiscent of Laura’s entry in John Tiffany's recent Broadway revival of THE GLASS MENAGERIE, where she enters through a couch.


As these notes suggest, there’s much here to admire from an aesthetic point of view. Dramatically, however, none of it affected me the way a good reading of any Poe short story or major poem would. Seeking another opinion, I asked that damned bird sitting above my chamber door, “Is there—is there a hit on E. 4th Street—tell me—tell me, I implore!” Quote the raven, “Clever bore.”
Posted by Samuel L. Leiter at 12:55 PM