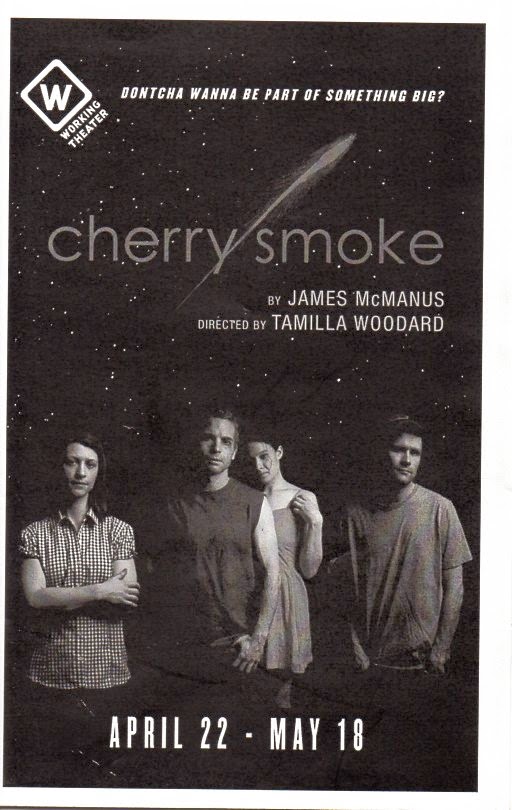 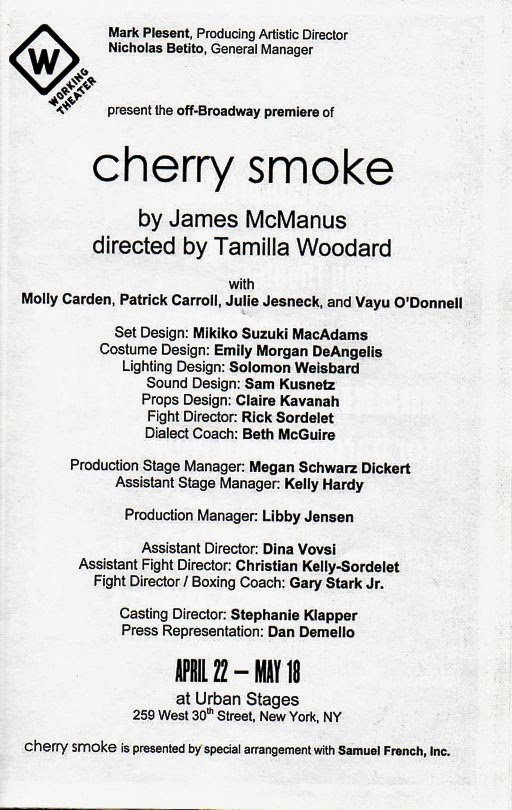 The just ended 2013-2014 season was filled with plays about sports, among them THE LONELINESS OF THE LONG DISTANCE RUNNER, FETCH CLAY, MAKE MAN, ROCKY, and BRONX BOMBERS. Some of them reveled in athletic performances as well, a trend that continues with CHERRY SMOKE, James McManus’s play being given a dynamic presentation at Urban Stages after earlier incarnations, with different casts, in Chicago and Washington, D.C. The New York staging is under the auspices of the Working Theatre, dedicated to the mission of providing plays "for and about working people" with the hope of bringing such people to the theatre so as to "change the composition of New York's theater audience to reflect a full range of socio-economic diversity." CHERRY SMOKE is in the highly capable directorial hands of Tamilla Woodard, and features an excellent ensemble with an especially potent performance by Vayu O’Donnell as Fish, a pugnacious, working-class amateur boxer from a small, poverty-riddled steel mill town in western Pennsylvania. 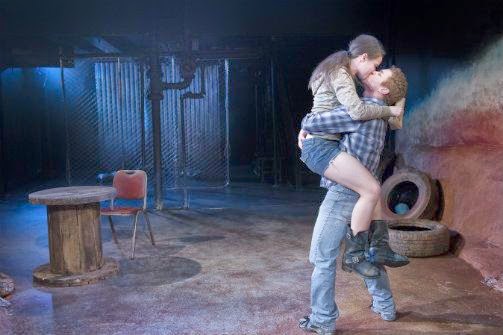 
Fish, referred to as a volcano ready to explode, does so pretty often in the course of the intermissionless hour and 40 minute play, which moves back and forth in time (sometimes not too clearly) to tell the story of his love affair with Cherry (Molly Carden), another survivor of an abusive upbringing (her dad burned their house down, killing her mom and her lover, and her grandpa got her pregnant). This homeless, sweet, and ignorant child—who later claims to have met Jesus on the riverbank—falls in love with Fish when she’s 10 and he 13. Fish’s nickname comes from his ability to stick his face in the dirty waters of the local river and catch fish in his teeth (which he demonstrates with a believably slithery prop). The play also explores Fish and Cherry’s connection to Fish’s slightly younger brother, Duffy (Patrick Carroll) and his girlfriend/wife, Bug (Julie Jesneck), who has an interestingly disgusting story about how she got that name. CHERRY SMOKE is essentially a character study of these four misfits, mired in poverty with little way out, and of their trying to find a way to live meaningful lives despite the lack of outlets for people of their low-end educational and cultural backgrounds.


The potently dangerous Fish, with or without his gloves on, can barely restrain his temper, a flaw that keeps landing him in juvenile correction (“juvie”) or prison, separating him from Cherry, the one thing in life—apart from fighting—that keeps him grounded. At one juncture, he gets out of prison to discover that Cherry is pregnant, which contrasts with the situation of Duffy and Bug, who can’t conceive, but otherwise have found a semblance of stability in their lives. Ultimately, the desperate Fish takes on a make or break bout, after which the play surges forward to its tragic conclusion.


The dialogue is rough yet poetic, the situations realistic yet theatrically heightened (including moments of direct address), and the acting, which depends on authentic west Pennsylvania dialects, first-rate. Mikiko Suzuki MacAdams has created a perfect visual ambience with a set suggesting a cruddy riverbank, filled with discarded tires and other junk, as well as a neutral space that allows for found objects to be used as furniture. The side walls seem splashed with blood, which figures prominently in this violence-prone drama. Lighting that makes the most of a limited budget is the work of Solomon Weisbard, who crafts especially powerful effects during Fish’s last fight.


Vayu O’Donnell, a trimly muscular actor, demonstrates impressive boxing moves as he fights his invisible opponents. These scenes are well staged by fight director Rick Sordelet, who also creates a credible boxing lesson given by Fish to Duffy, the hapless, gentle brother who eventually becomes Fish’s “cut man” (the guy who staunches a fighter’s bleeding) and his trainer.


CHERRY SMOKE is an expressive play about a neglected part of the national landscape, one that convincingly gives the fire of life to characters for whom the American dream is little more than blood, sweat, and tears without a meaningful payoff. It’s much more of a blow to the emotional solar plexus than a fantasy like ROCKY.
Posted by Samuel L. Leiter at 2:48 PM