"Needs a Repair Service of its Own" 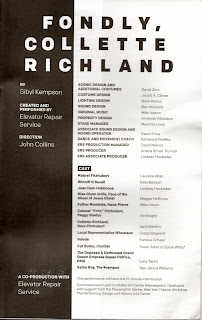 Late in FONDLY, COLLETTE RICHLAND, Sibyl Kempson’s interminable, unfathomable play at the New York Theatre Workshop, one character says to another with reference to the play itself: “If we didn’t have the sense to leave during intermission, we’re just trapped here listening to you go on and on and none of it goes ANYWHERE or pays off in ANY WAY.” I commend Ms. Kempson not only for the honesty of this metatheatrical observation, as well for the accuracy with which it sums up the feelings of at least some of those hardy souls –representing perhaps two-thirds of the original audience—who were still in their seats as the proceedings shambled to their conclusion.
FONDLY, COLLETTE RICHLAND, produced by the esteemed experimental theatre company Elevator Repair Service, which is noted, among other things, for its compelling adaptations of such literary works as THE GREAT GATSBY (titled GATZ) and THE SOUND AND THE FURY, is the company’s first non-devised production by a living author, although the script betrays decidedly literary characteristics, a number of which are more apparent on the page than on the stage. It was, in fact, inspired by Jane Bowles’s equally offbeat 1943 novel, TWO SERIOUS LADIES.

As a work of theatre it’s a throwback to the kind of hallucinatory free-for-all dramaturgy that began with Alfred Jarry’s UBU ROI in 1896 and that erupted in the surrealist movement of the World War I years, like Apollinaire’s THE BREASTS OF TIRESIAS. There’s also a dash of Wilder’s THE SKIN OF OUR TEETH in it, although each of the works I’ve cited is far more accessible than Kempson’s LSD-trip mélange of avant-garde tics. On several occasions, characters express their confusion about the meaning of the play they’re in, and there’s even a moment when an audience member (a plant) says he agrees, only for him to be ejected. Several of the more positive critics (and they exist) advise audiences not to try figuring it out and just go along for the ride; however, with characters, dialogue, and ideas that not only are extremely ambiguous but that, while they begin interestingly, become increasingly boring over a two-and-a-half-hour slog, there are far too many potholes along the way.
Director John Collins has given everything a distinct rhythmic structure, and the acting is defiantly one-dimensional and cartoonish. The characters all appear to represent abstract or metaphysical ideas. What’s clear is that the play is toying with notions of reality and illusion, theatre and real life, sleeping and waking (with frequent allusions to the moon and the sun), the conscious and the unconscious, and the importance of regaining a shared community in a world where it no longer exists.
In other words, it’s all a dream, where what’s hidden in the mind’s recesses spews forth images of Christianity (including the Face of the Ghost of Jesus Christ [Maggie Hoffman]), the Bible, paganism, prophecy, and Satanic devils and monsters; female empowerment; a conflation of ancient Roman times with today; a babble of languages, including both Latin and unknown tongues that spill forth indiscriminately; philosophic quotes; stream of consciousness dialogue; non sequiturs; incantatory poetry; nature’s transformative powers (a woman becomes a mermaid, a man becomes a tree), and so forth. In addition to the seriously quirky syntax, certain characters change “w” into “wh” words, as in “whind” for wind, and hard “c” into “ch,” as in “choffee” for coffee (these changes are barely discernible when spoken). A number of scenes are written with two or more speakers delivering overlapping lines, making the already dense text almost impossible to decipher.
Following a sort of prologue performed by the sunglasses-wearing, retro-styled Collette Richland (April Mathis), chatting on her old-time, 1960s radio show (its sign-off is the play’s title), the play proper begins with a relatively linear scene in the home of an average 1950s-style American couple: the stereotypical housewife Mabrel Fritzhubert (Laurena Allan) and the pipe-smoking, bow-tie and sweater-wearing Colonel “Fritz” Fritzhubert (Vin Knight); Colonel is his name, not a military rank. Dinner is interrupted by Local Representative Wheatsun (Greig Sargeant), whose reason for visiting the couple and their neighbors he never gets to explain. The Fritzhuberts are attended by a Cat Butler (Susie Sokol), who crawls about on all fours, wearing gloves, a hat with fur flaps over her ears, and red high heels. A priest in cassock and skull cap, Father Mumbles (Mike Iveson), sits at stage right narrating the stage directions into a mic while accompanying much of the action with mood music.
From here the action moves—presumably through a little ALICE IN WONDERLAND-like door in the Fritzhuberts’ home—to the Grand Hotel Conclae Vista, an elaborate hotel in the Swiss Alps, reminiscent of the one in Wes Anderson’s film, THE GRAND BUDAPEST HOTEL, where Fritz and Mabrel arrive, and where a bunch of other bizarre characters, human and nonhuman, appear (most of the actors play multiple roles). They include the Deposed and Dethroned Grand Queen Empress Queen Patrice (Lucy Taylor), Mabel’s sister Winnifr’d Bexell (Kate Benson), her sister-in-law Dora Fritzhubert (Ms. Matthis), a German-French concierge in shorts named Hans-Pierre (Mr. Iveson), and Sailor Boy (Ben Jalosa Williams), a bare-chested, lederhosen-wearing warrior with flowing blond hair who enters carrying a creature called a “pigdog” and its pups, the pigdog’s milk said to give its drinker prophetic powers. Eventually, a strange local creature with horns, the Krampus, plays a crucial role, both here and back home at the Fritzhuberts’ home, where the weird play concludes.
David Zinn’s nonliteral set is far simpler than what’s described in Ms. Kempson’s script: a low, curtained background surrounding the acting area with movable scenic units to establish locales. In the hotel, the units are paneled in dark wood, and dressed with sconces. At one point, a huge 2D mountain appears against the back wall. Jacob A. Climer has provided colorful costumes possessing a 1950s aura, including cleverly odd hats for the women, and all is nicely lit by Mark Barton. The hardest working designer, though, is sound specialist Ben Williams, whose multiple effects create a wide and wild variety of auditory support for the play’s peculiar world.

This inscrutable potpourri of old-fashioned avant-garde eccentricities is well enough performed by a talented ensemble that seems to be having more fun than the audience; their unusual characters, however, are so dependent on highly stylized techniques that none have enough humanity to make you care a whit about them. This was one of those experiences where my eyes were on my watch almost as often as on the stage, and where I applauded more for the play’s being over than for my appreciation of it.
OTHER VIEWPOINTS:
Show-Score