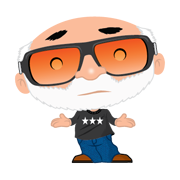 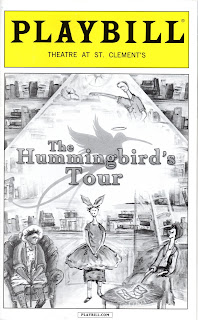 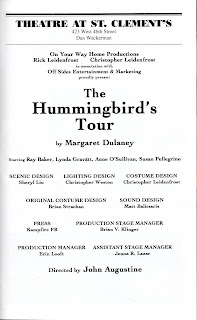 What would you do if someone said they could tell you the day you were going to die? Would you want to know or would you do what you could to avoid knowing? This question is one of those at the heart of Margaret Dulaney's THE HUMMINGBIRD’S TOUR, a whimsical family comedy about death, with a theological subtext and a dash of magic realism. Unfortunately, this makes it sound a bit better than it is.
Norton (Ray Baker), a widowed, professorial sexagenarian, lives in a Northern California home with Mattie (Susan Pellegrino), his spinster younger sister, also in her 60s, and Constance (Lynda Gravátt), a grumpy, philosophical black domestic in her 80s. Constance has been with the family for much of her long life, barely does any housework despite still drawing a salary, and is more like Norton and Mattie’s nanny than their servant.
Although the words agnostic and atheist are never spoken, Norton, who spends most of his time perched reading atop a ladder in his bookshelf-lined library/living room, is a skeptic about religion, although he ultimately reveals his Achilles heel when it comes to the possibility of reuniting after death with his late, beloved wife. On the other hand, Mattie, who fears unhappy endings, seems much firmer in her faith, being a churchgoing Episcopalian preoccupied about where she’s headed after she passes. Hoping to bring happiness to the residents of a nursing home on Easter Sunday, she’s created a silly-looking, pink bunny outfit, with big ears, in which she spends a good deal of stage time.
Arriving for a visit is Norton and Mattie’s several-times-married older sister, Lucy (Anne O’Sullivan), whose search for spiritual enlightenment has led her to stay at a nearby ashram. Norton refers to Lucy’s serial religious encounters as her “hummingbird’s tour of theology,” since hummingbirds remain in one place for only 15 seconds. She’s brought along Peter, her young spiritual advisor, who remains offstage in the adjoining kitchen, and who looks different to everyone who describes him. Each time someone enters from the kitchen after talking to Peter, a strange light glows in the doorway, an unearthly sound is heard, and the entrant’s face has a look of supreme goofiness. Peter, Lucy tells Norton and Mattie, has the power to look at someone and predict when they’re going to die. Since an earlier bit of dialogue notes that the Pearly Gates are manned by St. Peter, it’s possible this is the very guy. (I’m not saying.)
What plot there is—and there isn’t much—concerns Constance, who doesn’t know what Peter means when he tells her, “April 14, 1 p.m.” April 1 also happens to be the upcoming Easter Sunday. The siblings choose not to tell Constance that, if Peter’s right, this is when she’ll die. Further, four envelopes are left by Peter, one for each character; this provides a touch of tension when the siblings consider whether they want to open them. As they wait to learn Constance’s fate, they chat about death, predestination, faith, belief, miracles, religious diversity, Heaven, the need to live life while you have it, how to prepare for death, the power of love, and other potentially heavy topics, although always in a lighthearted, casual way.
Sheryl Liu’s homey set, nicely lit by Christopher Weston, makes you want to pick a book off the shelves and make yourself comfortable. The actors, briskly directed by John Augustin, and suitably attired by Christopher Leidenfront (there’s also a credit for “Original Costume Design” by Brian Strachan), are mildly appealing but more workmanlike than wonderful. Most distinctive is Ms. Gravátt as the ornery old Constance, wielding her cane as a potential threat to those who step out of line, but her use of a very heavy dialect often obscures her lines.
THE HUMMINGBIRD’S TOUR, previously seen at the Bucks County Playhouse, has enough thoughtful substance to engage those with a bent toward this kind of material; its repartee—despite the potentially ponderous subject matter—is blithe enough to generate gentle laughter, and its schmaltzy conclusion, far-fetched though it is, may stir some emotions. But, after two hours, its lack of action, dependence on often fuzzy theological chit-chat, and uncomfortable mix of the real and the unreal, may not make you feel particularly enlightened.
OTHER VIEWPOINTS:
Theatre is Easy
Stage Buddy