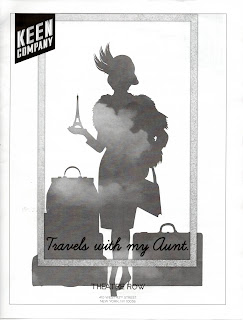 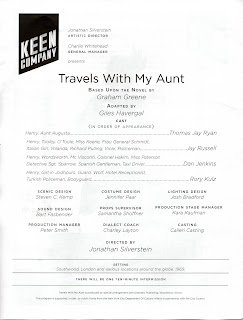 There are as many ways to adapt a novel for the stage as there are ways to skin the proverbial cat. These range from literal page to stage versions to a wide spectrum of creative adaptations that find clever theatrical means to bring the book to life. In the former, the characters, costumes, sets, and story cling as closely as possible to the original (think LES MISÉRABLES), while in the latter the staging uses interesting conventions that simplify the technical elements in order to convey the story as imaginatively as possible. The Keen Company’s revival of TRAVELS WITH MY AUNT, Scottish playwright Giles Havergal’s 1989 adaptation of Graham Greene’s whimsical 1969 novel, falls into the latter category. It was first produced in Glasgow, and subsequently seen in London, San Francisco, and New York, where it starred Jim Dale and Brian Murray in a 1995 Off Broadway production whose performances were highly lauded. Earlier this year, a 50-minute version won “best play” awards at British festivals.
The loosely structured narrative, which has a certain dated charm, includes around two dozen characters, all of them played by four actors (Daniel Jenkins, Jay Russell, Rory Kulz, and Thomas Jay Ryan) dressed exactly alike: black suits with vests, white shirts, dark, patterned ties, silver watch fobs, and derby hats with a tiny feather in the hatband (the costumes are by Jennifer Paar). This reflects the dull, conventional appearance of Henry Pulling, one of the two protagonists, whom each of the actors gets to play in the performance’s fluidly shifting style, including moments when the entire quartet is Henry. Barely any other props (a funeral urn being the most prominent) are used, mime taking their place, and the actors transform from role to role purely by alterations in posture, voice, and gesture. All the actors are male, requiring that they play both men and women, including the other protagonist, Henry’s flamboyant Aunt Augusta (played in the 1972 movie by Maggie Smith, and here by Mr. Ryan). Direct narrative address by Henry mingles with straightforward dialogue, occasionally with bookish interpolations like “Aunt Augusta said accusingly” after someone has spoken.

The story concerns Henry Pulling, a bland, charmless, bachelor; this 55-year-old retired banker, devoted to tending his dahlias, meets the 75-year-old Augusta, his maternal aunt, at his mother’s funeral. She hasn’t seen him since his baptism, but he soon learns from her that the woman he thought his mother was actually his stepmother; thus his frequent questions as to whom his mother was (the audience will quickly figure this out). Augusta is an amoral free spirit, who lives with her black lover from Sierra Leone, Wordsworth (Dan Jenkins). Augusta, paying for everything, whisks Henry off to Paris, from whence they travel on the Orient Express to Istanbul, later passing through Argentina before settling in Paraguay.
The pair encounter intrigue and adventure, with incidents involving marijuana, fortune telling, art looted by the Nazis, smuggling, Henry’s epistolary flirtation with a woman in South Africa (Mr. Russell), a brief stay in prison, a visit to the grave of Henry’s father in Boulogne, the CIA, Interpol, the novels of Sir Walter Scott, and Henry’s relationship with a 14-year-old Paraguayan girl (Mr. Russell). Henry learns more and more of Augusta’s romantic life, including her various love affairs (one with Mr. Visconti [Mr. Jenkins], a Nazi collaborator). Ultimately, having changed into a beige tropical suit and Panama hat, he discovers his true self.
Steven C. Kemp’s rather clunky unit set, showing a blue sky, white clouds, and block-like protrusions with images of foreign destinations, like Istanbul and Paris. A large, movable scenic unit dominates the space, one side representing dull British residences, the other showing a bright orange wall, with a gate, for the scenes in South America.
The conceit is initially interesting, but, with such a rambling story, the actors must be crystal clear about their characters and intentions at every moment. While they generally manage to do that, the performance nonetheless descends into both colorlessness and fuzziness. Whatever Jim Dale (who played Aunt Augusta) and company did to attract bravos in 1995 sure isn’t happening here. Director Jonathan Silverstein’s pacing is too languorous, the cast too charisma-impaired, and the dramatic developments, which should remain bright and sparkling, fizzle and sputter. There are laughs, of course, but it’s hard not to wonder how much more fun it might have been had the 50-minute version been produced. Several rows of spectators saw their 50 minutes, however, and didn’t return after the intermission for the next 50.
Mr. Havergill’s adaptation demonstrates that it’s possible to turn a multi-locale, multi-character novel into a play, using only four identically dressed actors and barely any props. It’s a trick, and, like all good tricks, needs distractions to make it work. Such distractions would have been a first-rate cast and production, and a consistently engrossing story. Their absence leaves the trick’s illusion exposed.