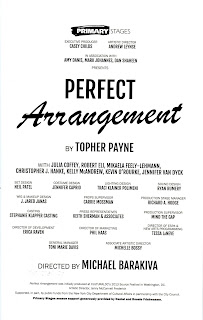 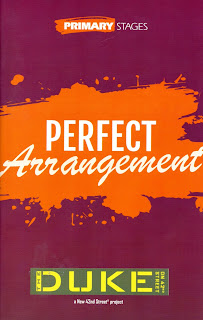 Most film and theatre treatments of the political witch hunts of the 1950s focus on Senator Joseph McCarthy’s attempts to root out communists in American government and society. Topher Payne’s interesting, amusing, but imperfect play, PERFECT ARRANGEMENT, first seen at CulturalDC’s 2013 Source Festival in Washington, D.C., and produced here by Primary Stages, takes a different tack. It examines an area of McCarthyism that has been practically untouched in mainstream cinematic and theatrical circles—the persecution of homosexual employees of the U.S. State Department.

A bit of history: starting in 1950, a significant part of McCarthy’s investigations involved the purging of homosexuals employed by the Department of State, a practice that had been carried on within the department itself since 1947. By 1950, 91 people had been dismissed, their transgressions vaguely defined with such phrases as “moral weakness.” On February 28, 1950, however, Deputy Under Secretary for Administration John Peurifoy reluctantly admitted at a Senate hearing that the reason was their homosexuality. This revelation led to increased pressure on the State Department to rid itself of gays and lesbians because their sexuality was believed to make them security risks. In 1950, 54 suspected homosexuals were fired, and by 1953 hundreds more had lost their jobs, often with barely any evidence to support the charges. Eventually, more people were fired for their alleged homosexuality than because of their leftist leanings. The title of David K. Johnson’s 2004 book on the subject, The Lavender Scare, mirrors the better known “Red scare” and derives from early 1950s references to gays as “lavender lads.” A 2013 documentary was based on Johnson’s book.

The action of PERFECT ARRANGEMENT is set in the Georgetown living room (designed by Neil Patel) of a young couple, Bob (Robert Eli), a State Department employee, and Milly Martindale (Mikaela Feely-Lehmann); it’s a huge, square, sparsely decorated, blandly unattractive space, with beige walls interrupted by fieldstone sections, an upstage closet, a large, curtained window at left, and doorways to the hall and kitchen at right. The setting cleverly manages to look both real and phony at the same time.
The title refers to the setup the Martindales have created with the Baxters, who live next door (that closet is more than metaphorical). Jim Baxter (Christopher J. Hanke), a school teacher, is married to Norma (Julia Coffey), a secretary at State who works in Bob’s office. Jim's actually Bob’s lover, while Norma and Millie are similarly involved; their marriages are a front to cover their “deviant” sexuality. The play begins with a cocktail party at the Martindales’ where we meet the two couples, as well as Bob and Norma’s boss, a blustery, middle-aged, homophobic bureaucrat, Theodore Sunderson (Kevin O’Rourke), who’s married to Kitty (Jennifer Van Dyck), an airhead refugee from a 1950s TV sitcom (think of a certain redhead). To the Sundersons and everyone else, the Martindales and Baxters look like ordinary straight couples.
Trouble begins brewing when Bob, who’s been uncovering commie employees for State, is ordered by Sunderson to do the same for gays. He’s willing to do what he must to protect his perfect arrangement, but Norma feels increasingly uncomfortable as she watches those who've been let go pass her desk. The pressure grows more intense under Sunderson’s scrutiny, and a wrench is thrown into the works by a decision to move Barbara Grant (Kelly McAndrew), a translator with an unapologetic appetite for sex in every flavor, from her job overseas back to Washington because of a complaint about her bedroom activities. Will she be fired? And how will she react? How long can the Baxters and Martindales sustain their crumbling masquerade? And what are their alternatives? Tune in at the Duke and see.
The LGBT community is still fighting for complete acceptance into the fabric of American society, but when you consider the difference between the world depicted in PERFECT ARRANGEMENT and one in which members of Congress are openly gay and in which gay marriage is the law of the land, you realize how much progress has been made over the past 65 years. The setup in Mr. Payne’s play is an excellent one for expressing the fears and pressures gay people, especially those in government, faced in 1950, and the notion of telling the story within the mode of a sitcom has real potential. Moreover, Bob's ethical problem of how to maintain his integrity when forced to act so inhumanely is powerful; it brings to mind the behavior of those Nazis who explained their actions by saying they were only following orders.

Unfortunately, though, the writing and direction (by Michael Barakiva) diffuse much of the impact by hitting too hard, placing a distracting emphasis on broad, sometimes farcical comedy that's not funny enough to sustain itself and begins to feel strained within this dramatic world. It generates a few good laughs, but, for the most part, cheats the characters of reality, making them seem like abstractions whose problems may be real but with whom it’s hard to identify. When things darken, and the burden of secrets and lies becomes unbearable, the shift into melodrama is uncomfortable, serving only to accentuate the sense of artificiality. Equally artificial is the play's resolution, which ties things up neatly but is highly unlikely to have happened in 1950.
A great deal of attention has been paid by costume designer Jennifer Caprio to the women’s clothing; having everyone constantly dressed like a Vogue fashion plate, however, seems a bit heavy-handed. Less care has been taken with the authenticity of most Jim and Bob’s clothes, which—among other things—seem far too formfitting for 1950.
The acting comes on like gangbusters, but in some cases provides histrionic cannons when rifles would be best. Ms. Van Dyck’s Kitty is probably the most obvious example of this tendency though she’s a good enough actress to make even her cartoonish performance enjoyable. Kitty, by the way, has a secret of her own, which deepens her character but isn't consistent with her behavior. The standout is Ms. McAndrew’s sassy and sophisticated Barbara, who gets an emotionally satisfying if historically questionable curtain speech that would be the show’s 11 o’clock number if this were a musical.
There are a number of minor imperfections that could easily be fixed. The night I saw the play, a character made a dramatic exit without her bag, which, in the context, made no sense, (The script says she takes her bag, so one hopes this was simply the actress's error, not a conscious choice.) There's much to admire in PERFECT ARRANGEMENT, even in a muddled presentation, and I suspect it will find a ready audience.