"A Hippie-Dippy Trip to Skip" 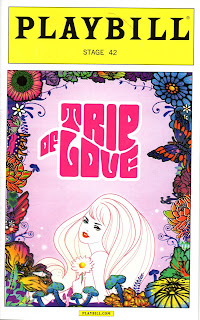 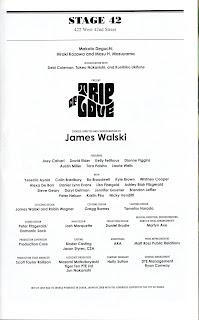 No decade of the last half of the 20th century was as politically and culturally revolutionary as the 1960s, which saw an explosive breakout in new theatre, music, film, and art. Hoping to memorialize that era in a musical revue, James Walski created TRIP OF LOVE; he also directed it, did the choreography, and co-designed its eye-catching sets (with the great Robin Wagner). Woefully, his promising idea has given birth to an overproduced, artistically underweight show—which premiered in Osaka in 2008—that seems little more than a corny, faux-nostalgia, cruise ship extravaganza.


In his program note, Mr. Walski declares that he hopes the show—playing at Off Broadway’s Stage 42 (formerly the Little Shubert), with its Broadway-sized stage—will revive the trend of such colorful Broadway song and dance musicals as BUBBLING BROWN SUGAR, SOPHISTICATED LADIES, DANCIN’, SUGAR BABIES, AIN’T MISBEHAVIN’, and the rest. (Three of the shows he mentions had all-black casts, but there’s only one such performer in TRIP OF LOVE, the gorgeous, gifted Dionne Figgins, who deserves better.) That trend, of course, hasn’t gone anywhere, as shows like 2013’s excellent AFTER MIDNIGHT make perfectly clear.
According to Mr. Walski, the thread that ties his show together is the dream experienced by a young girl—the Alice-like Caroline (Kelly Felthous)—who eats a magic mushroom after falling down the rabbit hole (signified by the Jefferson Airplane song, “White Rabbit”). So, yes, we get a lot of psychedelic effects, most of which, despite the effort, need jam to cover their cheesiness. The thread is extremely thin; in fact, it’s usually invisible, and what we get is a succession of barely related songs, each with its own colorful scenic background, usually dominated by Daniel Brodie’s intricate projections and Tamotsu Harada’s complex lighting. Now and then Caroline, engages in a budding romance with the handsome Adam (Austin Miller), but it’s just a flimsy ruse to create some sort of continuity.
Ms. Figgis, Mr. Miller, and Ms. Felthous are accompanied by four other lead performers, Laurie Wells, Tara Palsha, David Elder, and Joey Calveri. Of them, the statuesque Ms. Wells is the only one confined to singing, the rest being singer-dancers, each of them striking looking, with buff bodies. If shirtless dudes with ripped abs and pecs are your thing, this is your kind of show. The same could be said for the dozen-member ensemble, whose costumes are designed to make the most of their fat-free frames.
Talented as the company is in the abstract, the performers—forced to cavort amidst too many distractions—generally fail to generate the star quality that the original performers brought to the show’s play list (the originals aren’t credited in the program). They’re not helped by emphatic, over-amplified orchestrations that favor loudness over subtlety. Given the diversity of the period’s music, of course, the music is all over the place, opening with Ms. Wells singing Michel Legrand’s “Windmills of Your Mind,” shifting to Ms. Felthous and Ms. Palsha combining in an ensemble version of “White Rabbit,” and then offering Mr. Calveri and company doing Iron Butterly’s “In-A-Gadda-Da Vida.”
The rest of act one provides Joni Mitchell’s “Both Sides Now,” the Surfaris’ “Wipe Out” (much of it done while standing on raised surfboards), Connie Francis’s “Where the Boys Are,” Tom Jones’s “It’s Not Unusual,” Nancy Sinatra’s “These Boots Are Made for Walkin’,” Frankie Avalon’s “Venus” (recorded in 1959, which makes its inclusion anachronistic, although its black light effects are memorable), Peter, Paul, and Mary’s “Where Have All the Flowers Gone?” (an antiwar song inexplicably staged as a romantic number), the Supremes’ “Lover’s Concerto,” Astrud Gilberto’s “The Girl from Ipanema,” and Andy Williams’s “Moon River,” presented against a beautiful background of an arched Japanese bridge surrounded by willows as a woman in a wedding gown hangs from a swing nearby. Your guess is as good as mine.
I could have lived without a couple of these numbers, even if they’d had better orchestrations, and the same was true of act two. The 60s, after all, was the Woodstock decade, but you won’t find anything here by Crosby, Stills, and Nash, the Grateful Dead, Joe Cocker, Janis Joplin, Richie Havens, or Joan Baez, to name just a few from that generation. There’s a 1963 Beatles number, “I Saw Her Standing There,” sung by Mr. Elder while standing, for some reason, outside a recruiting office in San Francisco’s Haight-Ashbury neighborhood, and we also hear Bob Dylan’s “Blowin’ in the Wind,” seriously damaged as sung by Mr. Miller, Mr. Elder, and Mr. Calveri dressed as GIs fighting in Viet Nam.
There’s no Simon and Garfunkel on the bill, nor even the Beach Boys (certainly better than the Surfaris, for God’s sake), but there is, questionably, Sandy Nelson’s “Let There Be Drums.” Act two also presents the Fifth Dimension’s “Up, Up and Away” in which the performers sail off in a beautiful balloon (how clever!), Lesley Gore’ “You Don’t Own Me,” “Jimmy Ruffin’s “What Becomes of the Broken-Hearted,” the Mamas and the Papas’ “California Dreamin’,” whose staging as an antiwar song had me scratching my head, Martha and the Vandellas’ “Nowhere to Run,” Neil Diamond’s “If You Go Away,” Petula Clark’s “Downtown” as well as her “Sign of the Times” (are two Clark numbers really necessary?), another Jefferson Airplane tune, “Somebody to Love,” Cher’s “The Way of Love,” and, during the finale, Steppenwolf’s “Born to Be Wild," with, strangely, “Batman” bringing down the curtain.
Although several numbers try to link their content to the context of contemporary events, each attempt is shallower than the other; some songs seem completely unconnected to their staging. This was the decade of widespread drug use, civil rights struggles, political assassinations, sexual freedom, Viet Nam, and so many other major issues. TRIP OF LOVE has a conceptual emptiness that only makes more vivid how great an opportunity was overlooked in giving the show historical relevance.

If you lived through the 60s, you’ll see at once how ersatz and cleaned up everything is, from Gregg Barnes’s unconvincing simulations of the period’s clothing to Josh Marquette’s wigs. This was, of course, the decade that gave us the hit musical HAIR, but not a single male performer sports the kind of lengthy tresses, or even facial growth, that helped define those flower power years. It's almost as if George Steinbrenner produced this show.
The walls of Stage 42 have been covered with hallucinogenic designs to make you feel TRIP OF LOVE is like a hippie-dippy trip. It's one trip, however, that you may find hard to love.