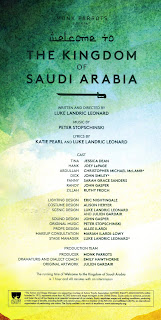 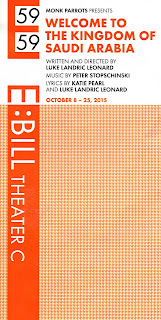 With my attention wandering during the second act of this opaque, borderline amateurish musical, in 59E59 Theaters’ tiny Theater C, I used my vantage point in the last row to see just how many people had made the wise decision to flee during the intermission of what they’d been warned would last nearly two hours. Of the fifty or so spectators who began this exercise in theatre torture, only 22 remained, a number perhaps inflated by one or two involved with the show. I could envision t-shirts being sold in the lobby for those who wanted to brag: “I can’t believe I saw the whole thing.”

The subject itself is worthy of theatrical treatment, as very few shows venture into the Middle East to examine their political, cultural, or religious issues. WELCOME TO THE KINGDOM OF SAUDI ARABIA, written and directed by Luke Landric Leonard, chooses to handle the material in an egregiously exaggerated, absurdist manner, telling its story through a series of scenes that seem to be part nightclub routine and part sketch comedy. (Mr. Landric also co-designed the scenery, about which the less said the better.) Multiple themes arise regarding expat life, national customs, religion, sex, marriage, politics, food, a:nd the like, but the writing and performance style, abetted by unlistenable music and lyrics, make it impossible to focus on any, creating a bizarre mishmash of confusion and unreality.
Act one is set during the 1981 war between Iran and Iraq. Hank Brown (Joey LePage) and his wife, Tina Murphy-Brown (Jessica Dean), a pious Christian couple from Texas, decide to move to Saudi Arabia, where Hank, a chemistry teacher, is offered a lucrative job working for Aramco, located in Dharan. Soon, we’re learning of the discomforts non-Muslim Westerners—lured by fat paychecks and various other amenities—might encounter in moving to a country like Saudi Arabia and living in a trailer on a company compound.
Also present is Randy (John Gasper), the couple’s aborted child, a grotesque, ghostly visitor who offers sour observations on what he witnesses. He’s played by a white-faced grown-up in long johns, his head in a bald cap with tufts of hair, and looking something like Mister Mxyzptlk in the Superman comics. Then there are the Browns’ British jolly expat neighbors, the cynical Dick (John Smiley), and his sexy, bored wife, Fanny (Sarah Grace Sanders), who romps about in a bikini; Abdullah (Christopher Michael McLamb), an Arabian coworker, decked out in traditional Saudi garb; and Zillah (Ruthy Froch), his niqab-wearing daughter, whose face we don’t see until late in the play. Oh, yes. There’s also a trio of camels, referred to by Abdullah as "the descendants of Abraham," played by three of the actors wearing intentionally silly costume pieces that cover their heads and shoulders. Enough said.
Act two takes us to 1991, as the Gulf War is revving up. The Browns are still in Saudi Arabia, but she wants to go home; he wants to stay to earn more money. Dick and Fanny are gone, but, somehow they still seem to be there. The Browns’ living conditions have improved, but their marriage has grown stale. He fantasizes about Zillah, and his religious convictions are shaky. Things have turned more conservative in Saudi Arabia and she feels something big is coming. Things get weirder and weirder, culminating in a climactic tableau that’s surely intended to make some sort of point, but that’s embedded in such a perplexing context that it’s no more of a head scratcher than most of what comes before it. Somehow in here there seems to be a message about expats selling their souls for the devil Big Oil, but maybe that's just my fevered imagination.
Mr. Leonard has the actors often tell their stories, or sing their songs, in front of standing mics (this is the third show I’ve seen recently employing this increasingly tired device); interrupting the flow of events by delivering lousy jokes, often accompanied by a laugh or boo track; doing eccentric “penguin” dances; and in various other ways demonstrating someone’s peculiar idea of cool, downtown, avant-garde theatre.
When Peter Stopschinski’s painful “Saudi-pop fusion” score and Katie Pearl’s often obscure lyrics are caterwauled, you’ll consider suggesting that the management—during its preshow cell phone and candy wrapper spiel—warn the audience about what’s is going to hear or offer ear plugs. They caution audiences about smoke machines, herbal cigarettes, and strobe lights, don’t they? Only Ms. Froch, who puts on a slinky sequined dress when she finally shows what she looks like (stunning), makes an  positive impression by demonstrating that she can actually sing one of the score’s ridiculous numbers, whose lyrics include such pretentious passages as:

I am a child
Of entropy
My thoughts collect
Randomly

Saudi Arabia might not be a welcoming country for the average Westerner, and WELCOME TO SAUDI ARABIA, a production of the Monk Parrots troupe, whose work has been called "fearless," is not very welcoming for theatregoers of any kind.
OTHER VIEWPOINTS: