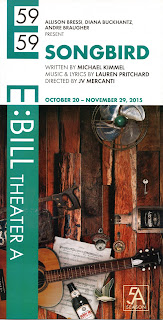 If Shakespeare’s the classic dramatist whose plays get revised, rewritten, and regurgitated more than any other, it would seem that the modern dramatist who gets the same reaction is Anton Chekhov. I’m not sure when the trend began, but maybe it was Josh Logan’s THE WISTERIA TREES, a 1950 Broadway play that moved THE CHERRY ORCHARD to a Louisiana plantation in the late 19th century. The stream of similar redactions has grown stronger in recent years; in 2013 Christopher Durang’s UNCLE VANYA mashup, MASHA, VANYA, SONIA, AND SPIKE, even won a Tony.
The Chekhov masterpiece that seems the richest source to plunder, however, is THE SEAGULL, first performed in 1896, which has not only been given countless revivals in the context of its original Russian setting, but has fostered numerous radical adaptations, including one by Thomas Kilroy that moved the setting to West Ireland; a ballet version that turned the main characters into ballet dancers; a movie set against the world of French cinema; an African-American interpretation; another version placed in the Hamptons; one set on an Australian beach; a modern dress version taking place on a Canadian estate; and, perhaps the best received of them all, a comic deconstruction called STUPID FUCKING BIRD.

So it should be no surprise that Michael Kimmel’s play, SONGBIRD, with 17 songs--many of them quite fine--by Lauren Pritchard, takes place in Nashville, the capital of country western music, where the fading actress, Mme. Arkadina, has been transformed into a fading but still colorfully brash country western star, Tammy Trip (Kate Baldwin, looking hot and sounding great); the novelist Trigorin into Beck (Eric William Morris), Tammy’s rather younger songwriter-paramour; Arkadina’s sensitive son, Konstantine, into Dean (Adam Cochran), a would-be singer-songwriter; Nina, Konstantine’s fragile young sweetheart, into Mia (Ephie Aardema), an aspiring singer-guitarist who falls for Beck; Sorin, Arkadina’s ailing brother, into Soren (Bob Stillman), proprietor of the shabby Nashville bar/music venue where the play transpires; Polina, Arkadina’s friend, into Pauline (Erin Dilly), a blonde floozy; Masha ("I'm in mourning for my life"), Polina’s daughter, into Missy (Kacie Sheik), a wannabe singer dressed in black, who bartends and sings the excellent "Cry Me a River"; Doctor Dorn into Doc (Drew McVety), a physician/violinist having a torrid affair with Polina; Medvedenko, the teacher, into the black barback, Rip (Bob Guillory), pining for Missy; and Ilya, Polina’s husband, into Samuel (Andy Taylor), who manages the bar with his wife. In one way or another, everyone in SONGBIRD is a twangy-accented actor-singer-musician, and they're all damned good.
The single set represents Soren's honky tonk saloon, where whiskey is the lingua franca; it also serves in the prologue as the Grand Ole Opry, where Tammy, in a flashback, is shown making a big impression in her debut performance singing “Small Town Heart” (one of the show’s best numbers). Jason Sherwood’s design, beautifully lit by Aaron Porter, fills the Theater A stage at 59E59 Theaters with an impressive structure of deteriorating wooden-slatted siding, but the walls contain so many worn-through holes and broken slats, one wonders what it feels like when the wind blows through, or why the city hasn’t closed the place down as a potential hazard.

Although it removes some minor characters, reducing the cast list to ten, and trims the material to a two-hour and 15-minute running time, SONGBIRD follows much the same plot trajectory as Chekhov’s original. The symbolic bird suggested by Chekhov’s title is no longer a seagull, but a bluebird. Instead of Konstantine’s avant-garde play, we get the offbeat "Wandering," sung by Dean and Mia, which Tammy, having made a special visit to her old haunts in order to support her son’s new song, can’t help rudely interrupting.
Like so much else in this production, directed by JV Mercanti, her behavior is as subtle as a brass band. Chekhov’s delicate interplay among characters and his reliance on subtextual psychological themes become soap opera theatrics and sudden, superficial, emotional blowups that emerge without sufficient justification. Also missing is a clear sense of Chekhov’s chain of unrequited love, with each character longing for someone who doesn’t return the feeling.  Covering up the lack of believable transitions and interplay are Ms. Pritchard’s sprightly and even moving songs, mostly C&W but also including blues and rock; the songs, however, are mostly stand-alone and don't help further the plot, as in more conventional musicals. But they're probably the strongest reason for visiting SONGBIRD.

Of course, one unavoidable side effect of adapting a well-known play by updating and setting it in an unusual environment is that some audience members will be preoccupied with matching the newly named characters to their originals, and guessing at how various incidents will play out. When Dean, for example, walks off at the end of act one very conspicuously carrying a noose, you wonder how he’ll manage to survive for act two. Seeing him enter later with a bandage around his neck, instead of his head a la Konstantine, only draws attention to the playwright's less than perfect choice. Since no gun appears in the play, you can’t help but think about how Mr. Kimmel will finish the young man off at the end; I won’t spoil it but it’s equally disappointing. But, hey, don’t feel blue. Two seconds after the show closes on that inevitable downer, the lights come up and the entire cast—Dean included—assemble for a rousing ensemble number. Excuse me?
Kate Baldwin dominates, both by her presence and her singing, but the super-trim, 40-year-old actress looks much younger than the 44-year-old character she’s playing (especially in her skin-tight duds, excellently designed by Mark Koss); she could probably get away with playing Nina. This choice deprives the play of the poignancy of a beautiful star whose looks are beginning to fade, possibly affecting her lover’s openness to the attraction of the fresh-faced Mia. Similarly, Beck is described as being too young for Tammy, but Mr. Morris, a handsome, dark-haired actor, doesn't look any younger than Ms. Baldwin. Closing the age gap between Beck/Trigorin and Mia/Nina has its virtues but it diminishes the poignancy in Chekhov's June-October affair. (One could also question the lack of a distinct age difference between Ms. Dilly's flashy Pauline and Ms. Sheik's Missy, but I do hear that people marry young down South.)
A play as familiar as THE SEAGULL is always worth a new approach, especially as its characters seem universal enough to transition to unexpected environments. Hopefully, the shift will enlighten us regarding themes and relationships encountered in more traditional presentations. When it doesn’t, it only serves as a reminder that, while you can take Chekhov out of Russia, you can’t always take Russia out of Chekhov.