"Not Your Grandma's Fairytale" 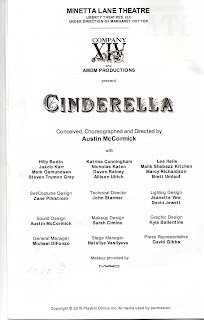 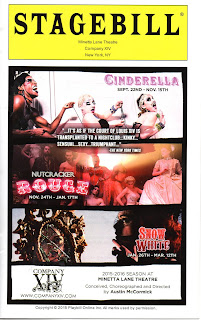 If you’ve never seen the work of imaginative director-choreographer Austin McCormick, whose Company XIV has been offering New York theatregoers a series of sexily suggestive, dance-oriented, elaborately conceived shows for several years now, CINDERELLA is as good a place to start as any. On the other hand, if you’ve visited one or more of them, such as NUTCRACKER ROUGE or ROCOCO ROUGE, the two I’m familiar with, you can expect more of the same. Like them, you’re invited into a smoky, chandeliered, and mirrored atmosphere (ROCOCO ROUGE’s audience sat at cocktail tables) where you can, as the press release announces, “Sip a libation whilst you experience a thrilling fusion of nightlife and theatre, featuring XIV's unique blend of live opera, circus, burlesque, vaudeville, baroque dance, and sumptuous design.” Leaving aside how “thrilling” the show is, this description accurately captures what you can expect when you visit one of McCormick’s elaborate productions. (For a video link, click here.)
Like NUTCRACKER and unlike ROCOCO, CINDERELLA ties its disparate elements together by means of a familiar children’s story, one to which everything adheres, albeit in unusual and unexpected ways. But essentially, the Company XIV style (and various cast members) remains the same; that artsy style, I’m afraid to say, is getting to be a bit long in the tooth. McCormick’s devotion to a sort of fantasy decadence redolent of the court of Louis XIV (the inspiration for the company name) would seem to have run its course. Semi-nudity rules the night, and, for all the emphasis on adults-only naughtiness (the tickets say 21+ but 16 is actually the minimum age permitted entry), the show is actually tastefully safe, with the few moments of mildly comic raunchiness being no worse than what you might see in a Shakespeare comedy when physical humor underlines the textual bawdiness. You could say it’s sexy but not erotic, especially since the men don't seem the type to have much sensual interest in the women. For me the burning question was, don’t those G-strings feel like wedgies?

As in the other McCormick shows I've cited, the spare set, by Zane Pihlstrom (who also did the costumes) is dominated by an Austrian curtain, although a show curtain (seen in ROCOCO ROUGE) picturing a 19th-century pornographic illustration also plays a part. Jeanette Yew and Devin Jewett provide consistently moody lighting, emphasizing spotlight beams cutting through the smoke.

Title cards, carried on by long-legged chorines and chorus boys, introduce the key scenes, and inform us such things as the two “entr’actes” and, during the curtain calls, the names of the performers. Apart from a few lines of innocuous dialogue, no one speaks. Stretching the overly familiar story of Cinderella to two and a half largely speechless hours may be a ploy to help sell more drinks, but artistically, the show would definitely benefit from being an hour shorter. At its present length, it runs out of surprises; even the hopefully original way it handles the slipper business in act three comes too late to make much of an impact. This is CINDERELLA, folks, not HAMLET!  No grown-up cares about these people and their problems! And there's a limit to how much interest skimpy costumes over bared flesh can maintain.
One thing serving CINDERELLA well in comparison to its predecessors is its decreased reliance on circus-type acts; only two are present; one, done first as a solo by the Prince (Steven Trumon Gray) and then as an exquisite aerial pas de deux with the Prince and Cinderella (Allison Ulrich), is the lyra hoop, which showcases its graceful performers’ strength and agility. Both Gray and Ulrich are also fine dancers, and Gray even demonstrates classical vocal chops as he sings Tchaikovsky’s “None but the Lonely Heart” while sitting in a bathtub surrounded by his effete, lounging minions. The other circusy act is an acrobatic pole dance, splendidly performed by Marcy Richardson, one of the two Step-Sisters, who does it—get this—while simultaneously singing an aria from Gounod’s Faust!
The other leading players include the tall, muscularly slender, dusky Davon Rainey as the wicked Step-Mother, a striking cross-gender figure in dominatrix-inspired strap-wear who nearly steals the show, and Brett Umlauf as the second singing Step-Sister, gifted with a strong soprano. (The pair enter singing Irving Berlin’s “Sisters” in German before switching to English. That’s about the level of the show’s campy humor.) The voluptuous Katrina Cunningham, who plays the Fairy Godmother (called here simply the Fairy and acted as if she had a lesbian longing for Cinderella), brings her smolderingly smoky torch song talents with her, but her words are often hard to make out, except for when she knocked “Walkin' After Midnight” out of the theatre.
McCormick calls his piece “a baroque burlesque ballet,” and the dominant form of dance throughout is ballet, with recorded music from across the ages and continents, including Hoffman, Lorde, Offenbach, Jaymes Young, Prokofiev, Paul Anka, the Andrews Sisters, Lana Del Rey, Verdi, Yma Sumac, and so on. No matter how clever the choreography and adept the terpsichoreans  there comes a time when boredom takes over and you can’t wait for that damned slipper business to be over.
Company XIV will be occupying the Minetta Lane all season. They follow up CINDERELLA with a revival of their Drama Desk-nominated NUTCRACKER ROUGE and then premier their new SNOW WHITE. I sincerely hope the latter finds a new creative groove that isn’t yet another venture into the same old territory the troupe already has squeezed dry. Been there, done that.