“Battle of the Aged” 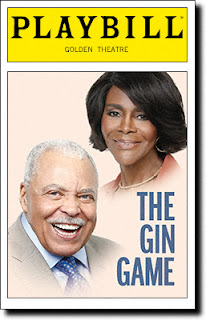 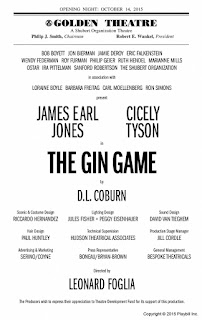 Ladies and gentlemen! In this corner, weighing—well, let’s just say a lot more than 200 pounds—the heavyweight, James Earl Jones! And in this corner, weighing perhaps 100 pounds or less, the atomweight, Cicely Tyson! But don’t let their relative sizes fool you. Her frame may be slight but Ms. Tyson (like someone else with that name) can slug it out with the biggest and best of them. She does just that in going up against her hefty opponent in this charming Broadway revival of THE GIN GAME, D.L. Coburn’s Pulitzer Prize-winning 1977 dramatic comedy about the anguish of growing old, alone and forgotten. 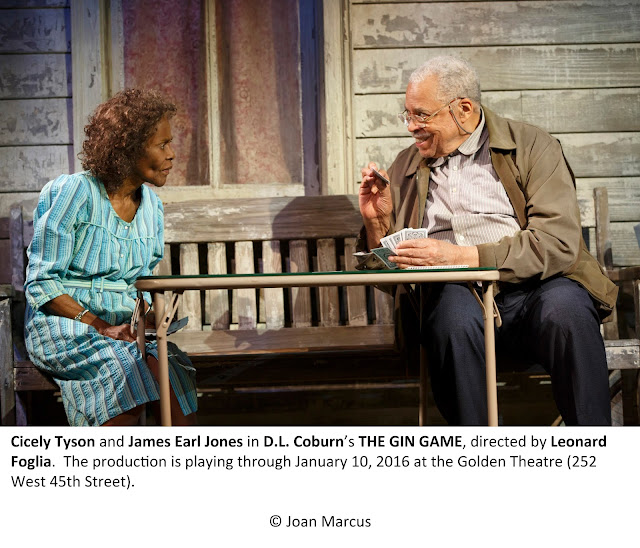 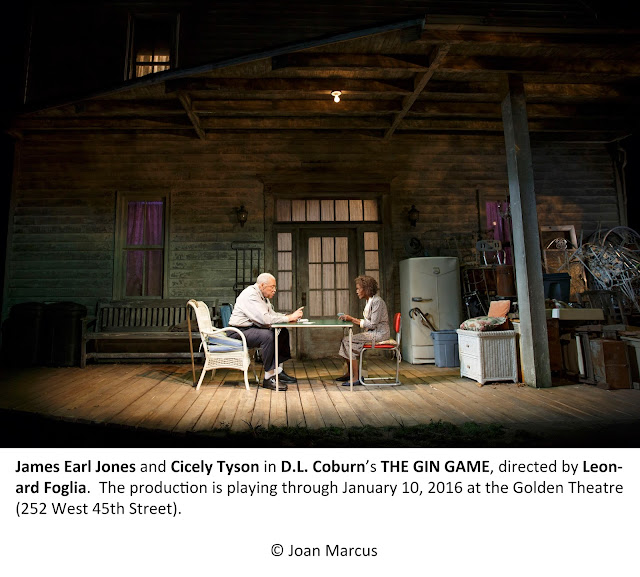 These two shining jewels of the histrionic profession (he’s 84, she’s nearly 91)—playing roles originated by Hume Cronyn and Jessica Tandy and covered in the 1997 Broadway revival by Julie Harris and Charles Durning—engage in a relentless battle of the aged in the roles of Weller Martin and Fonsia Dorsey, divorced and lonely geriatrics at a rundown nursing home, where life has treated them much the same as the discarded junk accumulating on the facility’s back porch. But the dormant juice of life starts coursing through their brittle bones as they become combative frenemies after Weller engages Fonsia, a new arrival, in a series of increasingly competitive gin rummy games that turn their budding friendship into a battle royale of spiteful taunts. 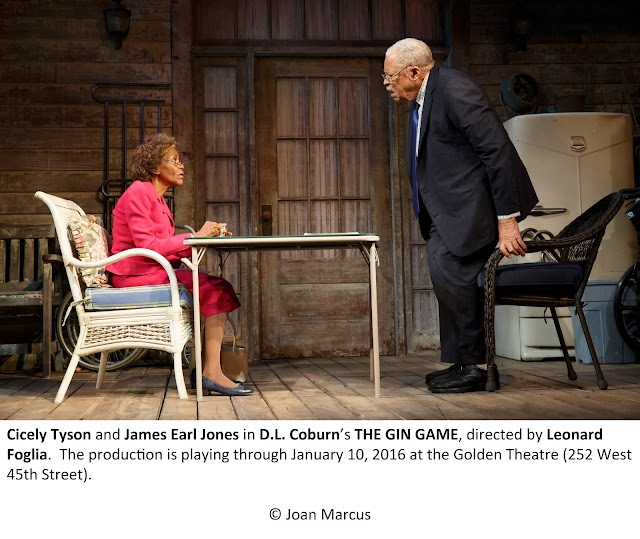 Weller considers himself a masterful player, while Fonsia claims to barely remember the game’s rudiments; as soon as they start playing, however, she shows an uncanny knack for winning that drives Weller crazy, bringing out all his combative, curmudgeonly tendencies, a clear result of life’s setbacks. As he grows ever more frustrated, he interrupts Fonsia’s attempts at communication by counting out the cards for the next hand with barely concealed contempt. When he finally wins, he won’t accept it, convinced she threw the game. 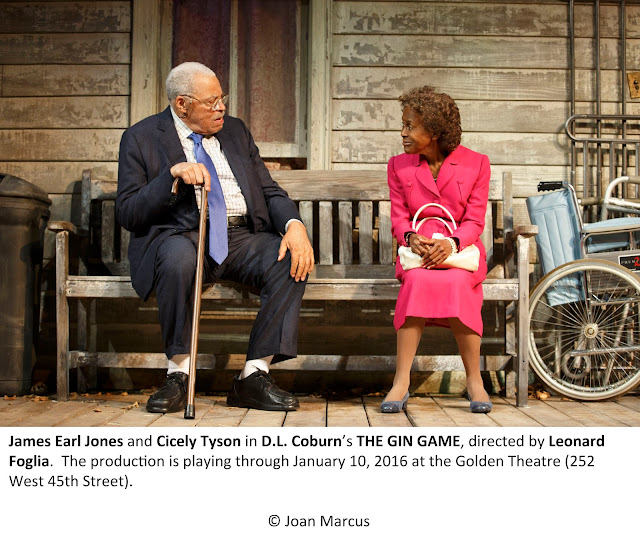 Weller doesn’t restrict their rivalry to the card table, and the play becomes a constantly shifting ballet of feints and jabs at each other’s psyches, with many a painful blow landing squarely But Fonsia and Weller’s subdued affection for one another comes out during a tender foxtrot they dance as music is heard wafting from inside; they begin by standing apart from one another while holding hands, draw closer into a more conventional position, and make your heart leap when Fonsia puts both arms around Weller’s neck, only for the spell to be broken when Weller’s legs can’t sustain the moment.

For all the powerful personal attacks, and the threat of physical ones as well, the play bounces from one funny line to another, keeping the pathos largely at bay (not necessarily the wisest choice) until the end as the laughs come marching in. And there’s plenty to be sad about, since both characters share the loneliness of elderly parents whose children no longer wish to have anything to do with them. 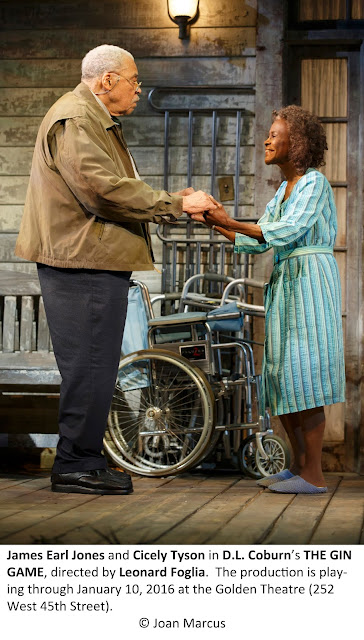 Jones, with his bulky frame, basso profundo voice, and dominating aura is perfect as Weller, a cantankerous, depressed, but decent man who once ran a successful business but has ended up in a shabby residence where he has nothing in common with the residents, half of whom he derides as catatonic.

The nonagenarian Ms. Tyson, playing a woman at least a decade younger than herself, ironically has to act old age by shuffling about in her slippers, when, remarkably, she seems not that far removed from her spring chicken days. She balances Jones’s ranting with her lighter, more cunning touch, playing Fonsia with a wide array of subtle touches, zinging one-liners with perfect timing, being frightened when Weller rages, twisting the knife just so when she sees an opening, and suggesting pools of emotion when her private life is discussed. 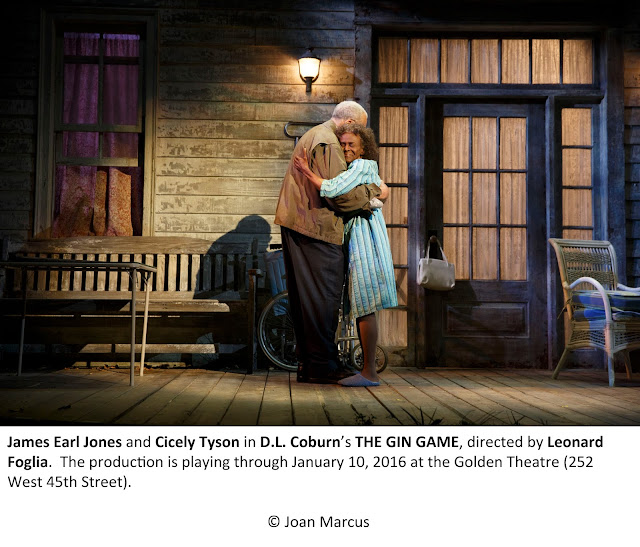 Despite it being obvious that Weller and Fonsia need each other, Mr. Coburn finds myriad obstacles to their realizing this; his plotline may be thin, some of his material may seem repetitive, he could trim the running time a bit, and his ending isn’t entirely satisfactory, but the playwright’s skill at keeping the dramatic ball in the air as the characters work out their issues keeps the audience sharply focused over the course of two acts and nearly two hours. Like it or not, that alone makes a visit worthwhile.

Some who’d seen the production before I got to it thought its pace slow and its actors still not comfortable with their lines, but what I saw was fully charged, its pacing as brisk as it had to be, and its actors parrying lines with not a nuance left uncovered. Much credit to Leonard Foglia for his loving direction.

THE GIN GAME is the kind of two-hander that, with actors of Jones and Tyson’s stature, could be played to equal effect in a bare room with nothing but a few chairs and a card table. This is Broadway, though, so Riccardo Hernandez (who also did the spot on costumes) has provided the weathered side of a multi-storied old folks' home, with a substantial porch roof, and an impressive pile of junk. When it rains, we get seat-shaking peals of thunder (sound by David Van Tieghem), torrents of rain, and lightning courtesy of the combined brilliance of lighting icons Jules Fisher and Peggy Eisenhauer, whose touches throughout are continually superb.

One can say of this production what Fonsia so often announces when she has a winning hand: “Gin!”