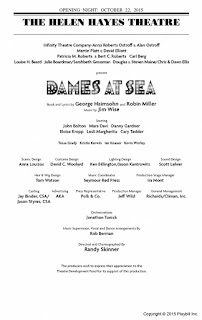 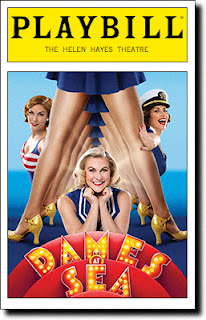 For some reason, I let DAMES AT SEA sail past me during my theatergoing salad days, although it had moved on from its 1966 Off-Off Broadway origins as a cabaret sketch at the tiny Caffe Cino titled DAMES AT SEA, OR GOLDDIGGERS AFLOAT to a successful Off-Broadway run at the Bouwerie Lane Theatre in 1968 before transferring to the Theatre de Lys. Had I gone, of course, I’d have seen the young Bernadette Peters (18 in 1966) in her breakthrough role of Ruby, the naïve tap-dancing dynamo from Centerville, Utah, who goes out there as a chorus girl and comes back a Broadway star on her very first day in New York. Although DAMES AT SEA was subsequently given many productions around the country, including a well-received revival at New York’s Lamb’s Club in 1985, its current incarnation at the Helen Hayes Theatre is its first on Broadway.

The Helen Hayes, Broadway’s most intimate venue, is the perfect spot for this six-actor spoof—sort of a mashup of FOLLOW THE FLEET, ANYTHING GOES, HIT THE DECK, and 42ND STREET—of early 1930s gobs, gals, and show biz movies (the kind that Busby Berkeley made for Warner Brothers), with leading roles assigned to Ruby Keeler and Dick Powell as the young lovers, and Joan Blondell as the wisecracking, gum-chewing dame who befriends her. Director-choreographer Randy Skinner has given the show just the right amount of Broadway gloss, and the verve and vitality of his perfectly cast ensemble make it easy to overlook some of the show’s innate weaknesses, such as its forced humor and spirited but uneven score.

Following opening credits that mimic the beginning of a black and white Vitaphone film, George Haimsohn and Robin Miller’s book places us backstage at a rehearsal for a new Broadway musical set to open that night; it stars the man-eating diva Mona Kent (Lesli Margherita) and is directed and produced by the harried Hennesey (John Bolton). Within minutes of wandering in from the street, Ruby (Eloise Kropp), just arrived on the bus from Centerville, falls in love Dick (Cary Tedder), a young sailor-songwriter, from the same home town, and is hired to replace one of the chorus girls. Mona, who likes Dick’s music, casts her sexy spell on him. Meanwhile, Dick’s sailor sidekick, Lucky (Danny Gardner), resumes his suspended romance with Joan (Mara Davi).
It turns out, however, that the theatre’s about to be demolished (watch out for that wrecking ball!), so the seamen persuade their captain (Mr. Bolton), last name Courageous (did I say that the humor was labored?)—one of Mona’s still flickering old flames—to let them do the show aboard his battleship. Ruby, misinterpreting a kiss between Dick and Mona, thinks she’s lost him, but, when Mona’s seasickness prevents her from going on, Ruby replaces her and stardom beckons. She and Dick reunite and the finale (“Let’s Have a Simple Wedding”) celebrates everybody’s weddings.
DAMES AT SEA is the kind of show business parody that allows the actors to play with unbridled exaggeration; still, while they practically wink about what they’re doing, they remain sufficiently grounded so you can relate to them as they carry out the silly dictates of the plot. Yes, some of the show gets a bit too campy, especially in the performances of Ms. Margherita and Mr. Bolton (who keeps shuffling between roles in act two), and most of the songs remain serviceable, although always listenable, reflections of those that inspired them. But smooth staging, a multitalented cast, and terrific tap dancing (especially by the supercharged Ms. Kropp whose feet are faster than a jackhammer) go a long way in keeping these gobs and dames afloat for two hours. Ms. Kropp is a knockout tap dancer, but her voice, strong as it is, lacks the unique timbre of Ms. Peters’s; Ms. Margherita, despite her comedic excesses, amusingly captures Mona’s vanity; the limber, long-legged Mr. Bolton, for all his mugging, demonstrates his usual versatility; and both Mr. Tedder and Mr. Gardner are attractive multi-threat performers, who make tap dancing look easy.
Jim Wise’s retro score mixes direct pastiches of standards by Jerome Kern, Cole Porter, George Gershwin, Harry Warren, Al Dubin, and the like. You thus have “Wall Street,” a takeoff of “We’re in the Money”; “That Mister Man of Mine,” which satirizes“The Man I Love”; and “The Beguine,” which does the same for “Begin the Beguine”; the show's other numbers are reminiscent of the period style (although the orchestrations for the orchestra of eight—the original had three—don't replicate the sounds of 1930s show music). They’re sung and danced by a multitalented company that can both belt the lyrics and tap the hell out of the tunes. Standout dance routines include “Echo Waltz,” done by the women as yodeling Swiss girls and using black light effects, and “Raining in My Heart,” staged with colorful umbrellas. 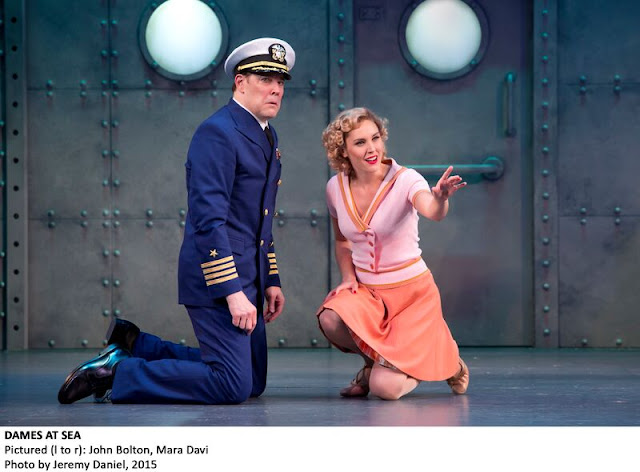 Unlike the 1968 production, which Martin Gottfried called “chintzy,” ripping the producers for being “too cheap or careless to provide well-painted scenery, press the costumes, or even replace torn stockings,” this revival is smartly designed, with expert lighting by Ken Billington and Jason Kantrowitz, and scenery by Anna Louizos that displays a solid-looking backstage for act one, and a substantial (if stagey) ship’s deck for act two. Unlike what Gottfried saw, David C. Woolard’s costumes are both well-made and well pressed. Nothing chintzy here. 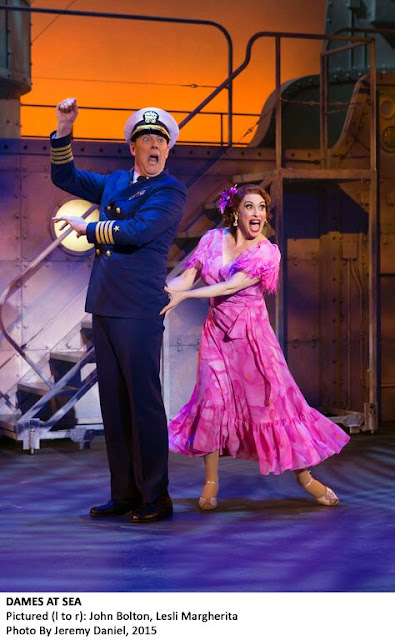 DAMES AT SEA is throwback theatre at a time when shows like FUN HOME and HAMILTON are redefining the Broadway musical; it’s got nothing on its mind other than enjoying itself at the expense of a harmless cultural shibboleth. It breaks no new ground, its score is enjoyable but not for the ages, its perpetual tap dancing can seem a bit much, and it may sometimes be too cute for its own good. But, to quote a better-known musical, if you let it entertain you, you’ll have a real good time.