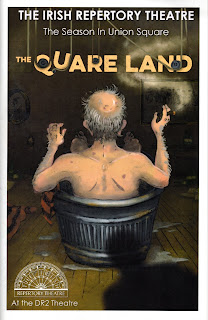 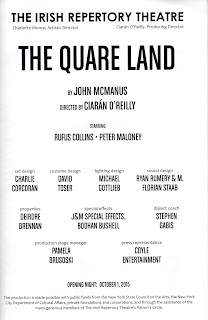 If you needed to find a New York actor who could hold an audience in the palm of his hand playing a crotchety, 90-year-old, Irish codger while sitting in a bathtub for an uninterrupted hour and half, it’s likely that the first person on your wish list would be Peter Maloney. The skills of this 71-year-old character actor continue to grow sharper as the years pass, as his performance in John McManus’s THE QUARE LAND at the Irish Rep demonstrates. However, too much of a good thing can be well, too much, which happens to be the present case.

Mr. Maloney plays a character with the rhyming name of Hugh Pugh, a filthy farmer living alone on fifty acres in County Cavan, Ireland, with a tiny herd of nine cows, and, until now, practically immune from the benefits of soap and water. When the lights come up on the shabby exterior of a farmhouse attic (expertly designed by Charlie Corcoran), the set revolves (a nifty effect on such a small stage) to display the crusty—and I mean crusty in the physical as well as psychological senses—nonagenarian in a tub, up to his neck in bubbles, a tray with squeaky toys and other bathtub implements laid out before him. The room around him is in an advanced state of decrepitude.

Not having taken a bath in four years, he’s made this one special, with a record player set within reach so Hugh can play Bobby Darin’s “Splish, Splash” and Enya, his fantasy woman. The yuck meter registers highly not only when he extracts from the tub one of the scales that fell from him in the bath, but when he uses a Rube Goldberg-like pulley system that allows him to retrieve bottles of beer from the cold water in the grimy toilet. The reason for his decision to bathe is the imminent visit of his “alco” (alcoholic) 91-year-old brother.

It’s not his brother who enters this mucky room, however, but Rob McNulty (Rufus Collins), a middle-aged building contractor in a suit and tie, who’s very anxious to get Hugh to sell him five acres of swampland. Rob needs it so he can add nine holes to the nine-hole golf course he already has on a resort for vacationing Brits he’s built in a nearby town. Rob, a reasonable—if desperate—businessman, has no idea of what’s in store for him, though, as the eccentric, ignorant but foxy old coot doesn’t know when to shut up and barely lets Rob get a word in edgewise. Meanwhile, Rob's patience—like that of the audience—grows thinner and thinner. Eventually, Hugh, who didn’t know he owned the land in question, discovers (from a 1932 letter in his unopened pile of mail, if you can believe it) how he came to acquire the plot; it all has to do with one of those construction workers sitting on a beam during the erection of the Empire State Building, famously memorialized in a Charles Ebbetts photo. Realizing he has the builder over a barrel regarding his payoff, he practically drives poor Rob crazy with his financial and personal demands.

Hugh’s richly colloquial language, delivered in a thickly colorful Irish brogue, is all you could want from a character like this, but the man goes on and on at such length, and eventually grows so tediously nasty that you want the playwright to find a way to throttle him once and for all. That he does, of course, but perhaps a half hour too late to do you any good.

Ciarán O’Reilly’s direction is brisk and funny, and provides enough activity, even within the cramped quarters, to prevent visual boredom. Mr. Collins’s height in the low-ceilinged, A-shaped space makes for interesting choices. Both actors are in top form, although Mr. Maloney plays too much of the role in high energy, full-out voice; this certainly increases the obnoxiousness level but doesn’t give the audience much listening variety. Mr. Collins is outstanding in the less colorful straight man role, playing Abbott to Maloney’s Costello. Still, while it’s hard to sympathize with this obstreperous lout, you'll have to see for yourself if he's received his just deserts at the end.