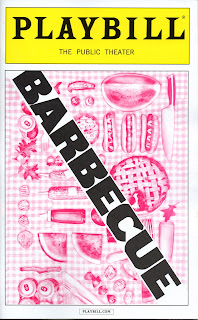 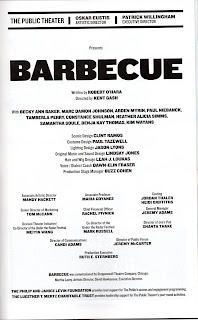 How—without revealing too many of its big surprises—do you describe Robert O’Hara’s BARBECUE, an achingly funny, yet subversively serious new play receiving its world premiere at the Public Theater? Its first act begins as a raucous farce about the O'Mallerys, a trash-talking, trailer park-like, redneck family gathered in a public park for an intervention on behalf of an addicted sister; it then morphs into an even more raucous farce about a ghetto-talking black family gathered in the same public park for a similar intervention, hits you in the face with an unexpected revelation about what you’ve been watching, retreats to a year earlier, and—somewhat like Pinter’s BETRAYAL—clarifies how act one came to be.


Those responsible for this terrific production, commissioned by Chicago’s Steppenwolf Theatre Company, seem to be trying to tiptoe around at least one major surprise by not passing out programs until the intermission; sensing the problem, the poor reviewer, finds himself like a metaphorical version of one of the characters, bound by ropes with a slash of duct tape over his mouth/keyboard.

I’ll let others decide how many spoilers they’re willing to give away, and simply say BARBECUE is a  finger lickin' good, frequently hilarious, marvelously directed, and outstandingly performed satire on racial stereotypes, Hollywood, addiction, rehab, family dynamics, overweening ambition, memoir writing, and the relative value of truth versus lies.
The play’s family contains four sisters, Lillie Anne, Adlean, Marie, Barbara, and a brother, James T. One of the sisters, Barbara, a dangerously volatile alcoholic and crackhead, nicknamed Zippity Boom, has been asked by the control freak eldest sister, Lillie Anne, to show up for a party, but the party is really a ruse to get Barbara there so she can be talked into—or, if necessary, forced--to enter a rehab program (I’ll avoid mentioning where, but it’s a laugh getter).
Everyone’s loudmouthed, foulmouthed, and aggressively eccentric; their language is peppered with “gatdamns,” malapropisms, colorfully garbled syntax, and laugh-provoking ignorance. At one point, Adlean puts Lillie Anne down for her supposed intellectual superiority: “Fuck You Lillie Anne. I’m just trying to give some constructive criticism cause you ain’t the only one up in here with a GED.” Each, apart from Lillie Anne, has multiple addictions, like pill-popping, weed, crack, cigarettes, beer, and Jack Daniels. Lillie Anne, for all her excessive behavior, is dedicated to making her family sober, which culminates in a huge wager when James, Marie, and Adlean bet against Lillie Anne’s belief that Barbara will agree to go to rehab. Just as Barbara’s about to give her reply—boom (or, perhaps, Zippity Boom)—the playwright pulls a shocker.
While, apart from act one’s lollapalooza of an ending, the plot may seem clear enough, there’s another kicker involved in having the family’s trauma shown in progressive, not repetitive, scenes, first by a white cast and then by a black one. And that’s all I’ll say about that, other than to mention that the device, puzzling at first, is extremely stageworthy in its reflection of the similarities and differences in how each group—both of them based on stereotypes—behave in the same basic circumstances. Further, the device is rooted in what, within this particular dramatic context, actually makes perfect sense, as gradually becomes clear in the less funny, more expository, and weaker second act. Nonetheless, it’s recommended that you get yourself over to the Public to find out for yourself what I’m talking about.
Kent Gash has directed with gusto and there’s not a flat note in the revved up ensemble. Seeing the actors go at this material with turbojet energy, spewing profanities like they were sunflower seeds, and squeezing every moment for total impact, is a joy, making it impossible to cite any specific performer for particular excellence. If I were looking to give an ensemble award, BARBECUE would be high on my list. I loudly applaud Marc Damon Johnson and Paul Niebanck as James T., Becky Ann Baker and Kim Wayans as Lillie Anne, Arden Myrin and Heather Alicia Simms as Marie, Constance Shulman and Benja Kay Thomas as Adlean, Tamberla Perry and Samantha Soule as Barbara.
Gash’s sprightly comic staging, including a memorable parody of an Academy Awards ceremony, is helped enormously by all the design and technical contributions, including Clint Ramos’s park-like setting; Paul Tazewell’s costumes, especially the comically overstated ones; Jason Lyons’s spirited lighting; Lindsay Jones’s upbeat music and sound design; and Leah J. Loukas’s spot-on wigs and hair design.
Barbecue season may be over, but you might want to get one last taste of it at the Public Theater.