"You Always Hurt the One You Love" 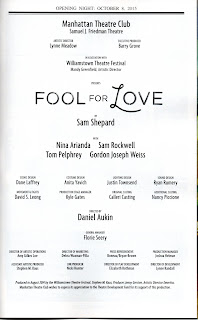 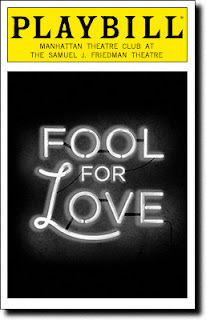 It happened 32 years ago, but I can still feel the visceral impact of the clash between the tempestuous half-siblings, Eddie and May, as embodied by Will Patton and Kathy Baker in the Circle Repertory Company’s 1983 production of Sam Shepard’s FOOL FOR LOVE. Patton had replaced Ed Harris, the original Eddie, who, with Baker, had starred in the play’s premiere production at San Francisco’s Magic Theatre. (Bruce Willis was Harris’s New York understudy.) I saw the play at the Circle Rep’s Sheridan Square venue before it transferred to West Forty-Second Street’s now vanished Douglas Fairbanks Theatre, which I mention because of how explosive it was to see these two emotional tinderboxes up close and personal within such intimate quarters. Not only did the play’s many door slams and wall poundings ring out like gunshots (Shepard, who directed, had mics built into the walls to amplify the sounds), but you could practically smell the sexual chemicals percolating between the stars.

Much the same could be said of the excellent current revival (booming sounds intact), its first on Broadway, of Shepard’s play, starring Sam Rockwell and Nina Arianda as the fiery lovers; the production, sharply directed by Daniel Aukin, was first seen at the Williamstown Theatre Festival in 2014. It must be admitted, though, that the four-character, 75-minute, one-act play seems somewhat diminished in a Broadway theatre, even though, with 622 seats,the Samuel J. Friedman is one of Broadway’s smaller houses. Not only is physical intimacy sacrificed but the larger stage seems to highlight its relative lack of plot development; its overdependence on long narrative monologues sometimes make it seem more an advanced acting exercise than a fully articulated drama. (Shepherd says he wrote a dozen versions before he considered the play finished.) 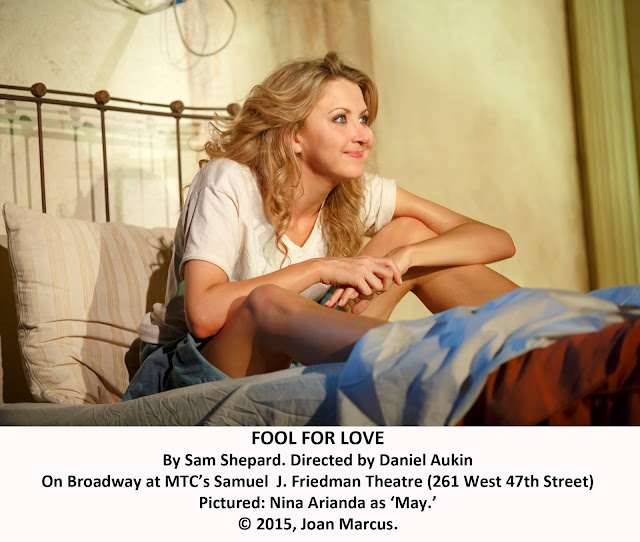 FOOL FOR LOVE, set in a decrepit motel on the edge of the Mojave Desert, is the exploration of the stormy, off-and-on, 15-year relationship between May and Eddie, a relationship during which Eddie has left May many times, including most recently when he became involved with a glamorous woman May calls the Countess (she's been considered a reflection of Shepard's own experiences with movie star Jessica Lange during his marriage to O-Lan Jones). This jealous lover is on his tail and, though we don’t meet her, her presence becomes known when she takes violent action outside the motel.

When the play starts, May’s preparations to go on a date are interrupted by Eddie’s unexpected arrival in his pickup truck, horse trailer attached. He’s a movie stuntman who’s driven 2,840 miles across the country to locate her. Soon the fetid air is filled with accusations, tears, screams, threats, and fighting; there’s also some show-off strutting—he with his lasso, she by changing into a sexy dress. 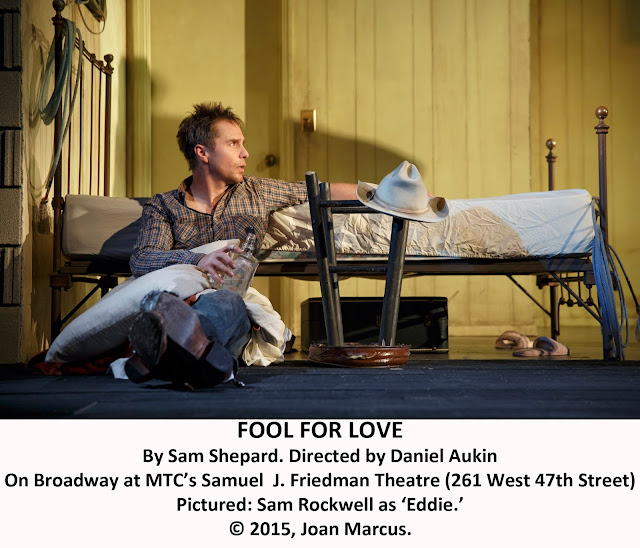 Martin (Tom Pelphrey), May’s mild mannered, perplexed date, a nice guy high school groundskeeper, bursts in protectively during a fierce argument between May and Eddie; eventually, he learns from the coolly arrogant Eddie of his and May’s history, going back to their teens, and of their incestuous connection. Symbolizing that troubled history is Eddie and May’s boozing father, the Old Man (Gordon Joseph Weiss), a character inspired by Shepard’s own father, seated down right in a ratty old armchair, visible only to Eddie and May like the ghost of their guilty consciences. The Old Man’s own history, skewed as it is, including his obsession with Barbara Mandrell, reflects the ways his children, by different mothers, followed the paths laid out by their parents. 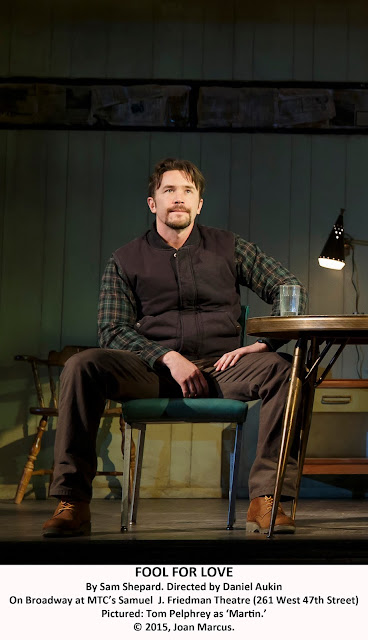 Mr. Rockwell’s diverse film roles have long demonstrated his chameleon-like versatility; he captures Eddie’s Marlboro Man machismo with conviction, wearing his faded jeans, beat-up cowboy boots, plaid cowboy shirt, and battered cowboy hat with a bent-knee slouch that tells you at a glance this guy lives as much on a horse’s back as on the land. A dry, cynically knowing, and potentially lethal undercurrent courses through him, and when he gets worked up he finds release in physical activity, like cleaning a double-barreled shotgun, fiddling with his rope, or expertly lassoing not only the furniture (a highlight of his performance) but May herself.

Ms. Arianda’s May is wound up like a spring, ready to burst open at any minute. With her abundant blonde mane and her lanky frame and skyscraper legs set off by a skintight red minidress (which keeps riding up) and black, high-heeled shoes, she makes an indelible impression, matched by a personality that can be unafraid at one moment and completely vulnerable the next. Much as May could be seen as Eddie’s victim, Ms. Arianda confronts his aggressiveness with fearlessness. 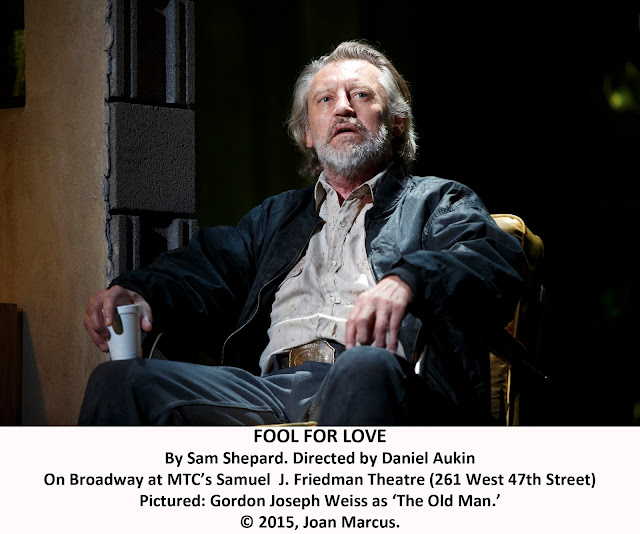 Mr. Weiss is suitably grumpy and frowzled as the tippling source of Eddie and May’s grief, and Mr. Pelphrey is perfect as the gentle (except when someone’s in danger), slightly dim, and politely curious Martin. His performance as May’s uncertain, puzzled date, offers just the right balance to the more heated histrionics of the leads.

Mr. Aukin’s direction blends the play’s overt naturalism nicely with its more stylized demands, Dane Laffrey’s rundown, unadorned motel room is appropriately seedy, David S. Leong’s staging of the more violent moments is realistic, Anita Yavitch’s costumes characterize their wearers, Ryan Rumery’s sounds hit the right notes, and Justin Townsend demonstrates his lighting brilliance in conveying constantly shifting moods. All that’s needed but impossible to provide is the ambience of a small Off Broadway theatre within the confines of a Broadway playhouse.