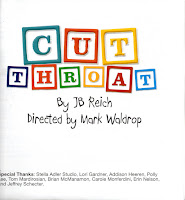 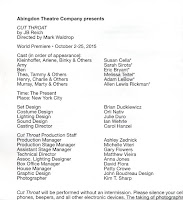 Pre-K education has been a hot topic in the local news lately, especially with the massive initiative begun by Mayor Bill de Blasio after he took office. My own daughter, for years a first and second-grade teacher, found a new lease on her professional life when she began teaching pre-k under this new public school program. But, regardless of how effective such pre-k turns out to be, there’ll always be parents like Amy and Ben Ganz in CUT THROAT (why he uses two words eludes me), JB Reich’s new play at the Abingdon Theatre Company.

Amy (Sarah Sirota) and Ben (Eric Bryant) are upward-striving, “pushy” Upper West Siders with a three-year-old, Charlie, that Amy is intent on getting into pre-k at one of Manhattan’s elite private schools. Amy obsesses about it, while the more skeptical, laissez-faire Ben sees no reason their toddler can’t go to public school, where Amy fears he’ll be “chewed up.” CUT THROAT is a satirical view of the cutthroat competition among well-to-do parents to get their kids accepted by such institutions, each with its own “philosophy,” and of the rigorous hurdles placed in applicants’ paths by the acceptance processes, which make even getting an application an achievement limited to only the most select; one line refers to an application being sold on e-bay for $10,000.

While that may be hyperbole designed to get a laugh, it’s well known that such exclusive, expensive schools ($25, 000 a year is mentioned) do have long waiting lists and that parents torment themselves in trying to get their brats accepted. Reich sees such parents as wanting to control every aspect of their kids’ lives to ensure they get into one first-tier school after the other so they can have successful careers. A comedy that ridicules the situation has lots of raw material to draw on. The subject has been treated countless times in TV sketch comedy; it also formed the basis for APPLICATION PENDING, a one-woman show earlier this year, starring Christina Bianco, that mocked the crazy desperation of parents trying to get their kids into an exclusive Manhattan kindergarten. CUT THROAT goes a bit deeper by also examining, if superficially and extraneously, the agonies suffered by ambitious, overprotective parents whose marriages and sexual desire can be threatened by the pressures of the application process.
On one level, CUT THROAT succeeds in making mincemeat of the application process, with its interviews, essays, high-priced tutors, Educational Review Boards (ERBs), and overachieving young ones; in a jibe at the latter, Amy and Ben fear that their eternally napping boy can’t compete with three-year-olds who compose musicals or manage hedge funds. Mr. Reich’s approach is to focus on Amy and Ben, played throughout by the same actors, while a host of others are played by two male and two female actors. This allows for broad—sometimes much too broad—characterizations of the loopy educators and rival parents, as well as of Amy and Ben’s colorful friends and relatives; even their shrinks are culpable, as seen when their first question after their analysands pour their hearts out is how they themselves can get an application.
Mr. Reich also tosses in his concerns with questions relating to whether life in New York City is preferable to life in the suburbs, and, even more emphatically, to parent-child relationships, as reflected in Amy’s with her martini-drinking, cigarette-smoking, suburban, divorcée mother (Susan Cella), and Ben with his kvetchy, retired, alter kocker, Jewish father (Allen Lewis Rickman), a former shirt salesman. Like everyone in the play, these characters are cardboard stereotypes that allow the playwright to bounce his ideas about mutual responsibility and guilt off them. Such scenes, as well as others, range from the realistic to the farcically fantastical: one involves actors representing the books Amy and Ben are reading to bicker with one another, while another has the actors, with puppets attached to their chests, playing three-year-old prodigies. These infusions dilute the play’s central focus with too many distractions.
Although they’re at the center of the maelstrom, Mr. Bryant and Ms. Sirota, especially the latter, are too wan and charmless to gain much sympathy. The wide assortment of other characters, however, give the supporting cast lots of opportunities for colorful, albeit mostly cartoonish, performances. Ms. Cella makes a strong impression as Amy’s cynical but loving mom, while also marching through over-the-top impersonations such as the German-accented head of the Kleinhoffer School and a wealthy British-accented woman who agrees, for the price of a charitable contribution, to write a letter of recommendation for Charlie even though she’s never met him. Mr. Rickman, a specialist in Jewish characterizations, sort of like a latter day Fyvush Finkel, nails Ben’s dad, and also does an acceptable job as Marty, Ben’s foul-mouthed, barroom buddy. (Full disclosure: he's a former student of mine.) Among Melissa Teitel’s sharply done roles are Amy’s sister Thea and the privileged, snobbish Tammy Glickstein. Adam LeBow’s best role is Charlie, which he assumes toward the end in a nicely written fantasy sequence that sums up the author’s down-to-earth thoughts on child raising.  Basically, he says, kids will find their own way, however much their parents love them and, no matter how they try to control their lives, they can’t live those lives for them.
CUT THROAT, efficiently staged by Mark Waldrop, plays out on the Abingdon’s postage stamp-sized Dorothy Strelsin Theatre, where designer Brian Dudkiewicz has covered the black painted walls with children’s chalk drawings, laid multicolored, nursery school-like rubber matting on the floor, and limited the scenery to variously shaped crates arranged into different groupings as needed. Orli Nativ has provided attractive, character-defining clothes, Julie Duro has lit the piece effectively (including scene titles projected on the rear wall), and sound designer Ian Wehrle has contributed mostly appropriate music but do we really need the klezmer music introducing Ben’s father?.


Mr. Reich’s play nicely skewers the ferocious world of pre-k applications and acceptances, and shows definite writing talent; however, despite its farcical touches, CUT THROAT doesn’t garner as many laughs as it should and weakens its satire by too many changes in tone and focus. Application Pending.