47. THE UNAVOIDABLE DISAPPEARANCE OF TOM DURNIN 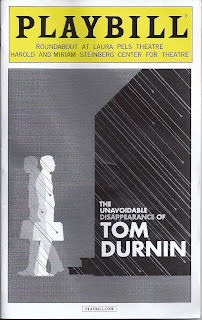 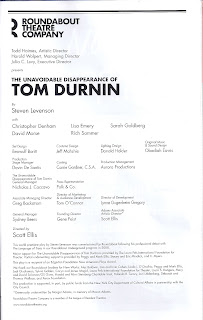 As I headed down the steps to the F train at 47th Street and Sixth Avenue last night, so did David Morse, the star of THE UNAVOIDABLE DISAPPEARANCE OF TOM DURNIN, which I’d just seen in the Roundabout Theatre production at the Laura Pels Theatre on 46th.  Often, I will fudge when I meet an actor this way right after a performance (when you go as often as I, it’s not an uncommon experience) and say something complimentary regardless of what I really thought, just to be polite, but in Morse’s case I was totally sincere in offering my congratulations on a truly excellent job. He thanked me and said it isn’t easy playing someone everyone hates and, before he went uptown and I down, we chatted briefly about how difficult a job he has in bringing sympathy to the Bernie Madoff-inspired character he plays. 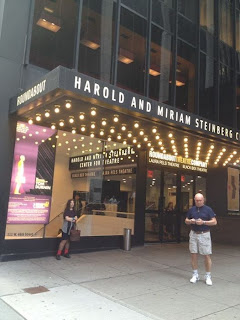 
THE UNAVOIDABLE DISAPPEARANCE . . ., by Steven Levenson, who wrote the fine office politics play, CORE VALUES, seen earlier in the season, is lucky to have Mr. Morse in its leading role, as the writing is decidedly uneven and a couple of the performances are equally shaky. Although there are vast differences between the play’s story and that of Mr. Madoff, the similarities are close enough so that few spectators will miss the connection.


A middle-aged man, Tom Durnin (Mr. Morse), shows up at the small and shabby exurban home of his 23-year-old son, James (Christopher Denham), who makes his scanty living as a stethoscope salesman. Tom, formerly a star lawyer, has just been released after five and a half years in prison, where he was sent after being convicted of cheating friends and relatives out of all their money by getting them to invest in a fraudulent company. Now, insisting he’s paid his debt, he tries to win back his children and his divorced wife, Karen (an excellent Lisa Emery). James, disgusted with and ashamed of his father, whose crime forced him to drop out of Yale, resists having anything to do with him, although he allows him to crash at his home for a month while Tom, who works as a barista at a nearby Borders (the play is set in 2009), finds his footing. Tom also tries to get back into his former firm by pressuring his son-in-law, Chris (well played by Rich Sommer, of MAD MEN), with a possibly trumped-up blackmail threat. A subplot involves a budding romance between James and a flaky young woman, Katie (Sarah Goldberg), he meets in a community college writing course, which he hopes will help him become a novelist.


The driving force in all of this is Tom’s determined effort to convince his ruptured family to forgive him, despite what he keeps insisting was his “mistake.” He uses all the manipulative intellectual and emotional ploys that made him a success, but the pain he has caused his loved ones proves a gigantic obstacle for even a man of his abilities. Mr. Morse’s behavior is so rooted in the moment, so grounded in desperation, that you are tempted momentarily to want him to find forgiveness, until you realize how much you are as much a victim of his wiles as any of the characters in the play. The play explores not only his propensity for lying, but that of James, whose mendacity is of another order but nevertheless has the power to inflict deep pain on loved ones.


Mr. Levenson’s play, despite its having several powerful scenes, keeps hitting wrong notes. Why is it necessary, for example, to have both the highly intelligent Tom and Karen fail to correct a simple error despite their being corrected by James? Tom keeps saying Snoopy Dog, no matter how often James says it’s Snoop Dog, and Karen insists on noting that James sells catheters regardless of James’s telling her it’s stethoscopes. The subplot about James and Katie is forced and inorganic, and seems like stuffing needed to fill out an hour and a half of intermissionless stage time. James and Katie read some of their writing to their class, and, while her sample is clearly inadequate, his is pretty bad as well, although he’s considered the class’s star pupil. What he reads takes place in the Ukraine, where he’s never been, but he finally learns the lesson that you must write about what you know; thus the play ends with a coda in which he reads a passage that reflects his own experience and that comments on what he’s just gone through. As he stands there in an amber spotlight, not unlike Tom at the end of THE GLASS MENAGERIE, this previously clueless writer has magically morphed into a budding literary talent.


Scott Ellis’s direction does what it can with this sometimes unconvincing material. Beowulf Boritt’s set, which uses a turntable at stage left to show both James and Karen’s residences, with a grassy lawn at stage right for the scenes outside the writing class, provides an adequate physical environment, supported by Donald Holder’s lighting and Jeff Mahsie’s everyday costumes.


Christopher Denham’s James and Sarah Goldberg’s Katie offer the weakest performances, both of them finding a single note on which they keep harping. Hers is a sing-song, girlish intonation, with mannered readings that reflect a type of vacuous young woman who appears too often in contemporary plays, TV, and films. His is a whiny, eyes-down, self-pitying depression that persists long after the point of his disaffection has been made.