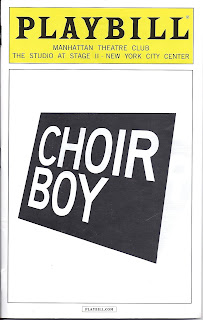 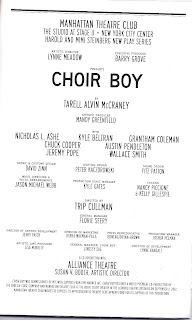 When the Manhattan Theatre Club’s production of Tarell Alvin McCraney’s CHOIR BOY, at the City Center Stage II, opens, Pharus Jonathan Young (Jeremy Pope), a vocally gifted but markedly effeminate student at the Charles R. Drew Prep School for Boys, is singing the school song, “Trust and Obey.” Suddenly, a student in the auditorium hisses a homophobic slur (something like "faggot-ass-sissy"). Pharus, taken by surprise, takes a four-second pause before he continues. Soon he is being questioned by Headmaster Marrow (Chuck Cooper), very disturbed about his performance, but Pharus, citing the school’s code of not snitching on his classmates, refuses to name names. Pretty soon, however, he exacts vengeance on his tormenter, Bobby Marrow (Wallace Smith), the headmaster’s nephew, by kicking him out of the school choir. The tensions created by Bobby’s virulent reaction to Pharus’s sexuality (possibly because of his jealousy of Pharus’s talent) and Pharus’s response create the play’s thematic through line. 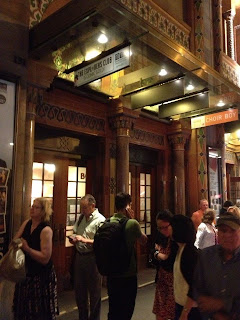 Drew is a school for African-American boys, and the only five boys seen are the members of the school choir, which concentrates on gospel music. The boys all dress neatly in traditional prep school uniforms, with blazers and yellow ties, and wear close-cropped, regulation haircuts. (They also undress to take showers, allowing for a bit of full frontal nudity.) In addition to Pharus and Bobby, there are AJ (Grantham Coleman), the star athlete, who is Pharus’s mature and understanding roommate; Junior (Nicholas L. Ashe), a baby-faced baritone who follows Bobby around like a puppy; and David (Kyle Beltran), a thin, eternally serious, bible-carrying divinity student. The only adults are Headmaster Marrow, relatively new to his job and somewhat insecure in it, and Mr. Pendleton (Austin Pendleton), an older white man who marched during the Civil Rights movement, and who has been hired to teach a required course in Creative Thinking; even though he has no musical ability, the headmaster puts him in charge of the choir, hoping he can somehow heal the fractious relationships among the boys. One of his first lines after making his entry caused a burst of laughter:  "It's not just black people who are late."


Pharus offers a strong fulcrum around which the drama revolves, although he does bring to mind Chris Colfer's Kurt on TV’s GLEE. He’s extremely bright and well read, extraordinarily talented, aggressively defensive, and creatively resentful. (Is he, perhaps, autobiographical?) Jeremy Pope plays him on multiple levels, showing his deep insecurities as well as his overt self-confidence. He’s able to mine the character’s limp-wristed effeminacy for both comedy and pathos. In one of the play’s most powerful moments, taking place in Mr. Pendleton’s class, he engages in a provocative debate about the meaning of spirituals, arguing against some historians’ belief that they are coded messages to slaves about flight,  advocating for them instead as still relevant tools for achieving spiritual healing.


McRaney’s intermissionless, hour and forty minutes play, which premiered in a hit production last year at London’s Royal Court Theatre, engages with sexual and racial issues in a number of ways, not least the habit some young black men have of tossing around the word “nigger,” a proclivity that detonates an explosive response from Mr. Pendleton, who categorically rejects such thoughtlessness. These subjects are always interesting and well conveyed by McRaney’s dialogue, although its crafting sometimes seems too carefully designed for dramatic effect and not what boys of this age would normally say. Smart as he is, for example, Pharus's speech about spirituals sounds more like an academic paper than an impromptu outpouring during a class discussion. Also, plays and movies that dramatize a gay boy’s victimization and consequent coming of age are becoming overly common, even when handled as creatively as in CHOIR BOY.


What many spectators will take away from CHOIR BOY, however, are its musical interpolations, sung acapella in exquisite harmonies and solos as memorably arranged by Jason Michael Webb. Each boy has a terrific solo, but when the choir sings as a group, especially “Sometimes I Feel like a Motherless Child,” it’s almost as if you never heard the songs before. Despite the enormous ability of the young actors, the number that stood out for me was Chuck Cooper’s giving voice to “Been in a Storm So Long.”


Trip Cullman does a fine job of staging CHOIR BOY, giving it a definite rhythm and precision; everything is well timed and fluid. On the other hand, there is a theatrical overlay that makes me feel that the boys, in particular, are not so much being as performing; the effect was to have me watching and listening with deep interest but not engaging on a deeper emotional level. For pure acting honesty, the palm goes to the marvelous Chuck Cooper. Austin Pendleton is the Austin Pendleton we have seen so often before, with his rumpled clothing, uncombed hair, and irregular speech rhythms, but when he blows the roof off with his attack on the n-word, he reveals a facet of his talent very rarely on display.


David Zinn’s set (he also did the costumes), surrounded by the audience on three sides, consists of a red floor and a red brick wall on which hangs a large blackboard. The wall is built so that its lower half can come down, revealing the interior of AJ and Pharus’s bedroom. This is clever and effective, as are the nicely choreographed scene changes using the actors and eschewing the need for visible stagehands.


CHOIR BOY has a great deal to offer, and I wouldn’t be surprised to see it given an extended run, or even to be moved to another venue. It didn’t work for me on every level, but it did on enough for me to recommend it. Given all its laudatory reviews, of course, that may simply be preaching to the choir.