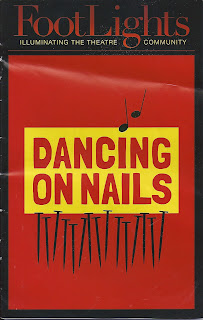 America, of course, is once more having “a national conversation on race,” a conversation that never seems to end. I had my own private conversation about the subject last night as I rode home on the A train from DANCING ON NAILS, a play by Paul Manuel Kane, at Theatre 80 St. Marks, in the East Village. An African-American woman, in what I imagine to be her mid-60s, was having a spirited but polite conversation with a young white man in his early 20s in the seat before me. This combination alone, even in today’s generally liberated climate, raised my curiosity, but when the young man soon got off the train and I took his seat, I quickly realized that he did not know the woman, since she immediately engaged me in conversation as well. The only people with whom I’ve had such an experience on the train have tended to be drunk or otherwise unstable, but this lady was simply a pleasantly garrulous individual who liked to talk. Before long, the conversation somehow turned to race, including my saying how unlikely it was that she and I would have been chatting on the subway like this when we were young. I was prompted to say this because DANCING ON NAILS concerns the relationship between a white man and a black woman in 1953 New York. I then recounted the basic plot to the woman.


Sam Heisler (Peter Van Wagner) is a 50-year-old Jewish bachelor who lives in the Bronx but owns a successful hardware store in Greenwich Village. His bookkeeper, who manages the store, is his 38-year-old sister, Rose Levitt (Lori Wilner), who lives rent-free in a basement apartment provided for her by Sam. Her somewhat loutish husband, Joe (Michael Lewis), is a cab driver and would be clarinetist whose behavior has cost him his job, forcing him to earn what he can cleaning cabs and serving as a gofer at the taxi garage. Rose, unable to bear children, wants to adopt a child. She gets the reluctant Joe to agree but they need $15,000 to qualify for the adoption process, and their finances are too severely limited to earn it on their own. Joe insists that Rose, despite her objections, must ask her brother for the money. But Sam is in no state of mind to pay attention to his sister’s needs. He has hired a young “colored” woman, Natalie (Jazmyn Richardson), to work as his stock clerk and, as he gradually learns more about her, finds himself falling in love with her. Natalie, who needs the job but who desperately wants to study at Juilliard to become an opera singer, is unaware of Sam’s true feelings, but Rose knows them and decides to take action.


The idea of a working-class, middle-aged, Jewish man in 1953 New York falling in love with his black employee and planning to propose to her has strong dramatic potential, although maybe not as strong as playwright Kane may believe. I was 13 in 1953 and remember well how family and friends spoke about blacks, who, even in otherwise liberal homes, were likely to be treated as second-class citizens and referred to as “shvartzes.” The subject matter of DANCING ON NAILS is enough to keep you attentive during its hour and 45 minute, intermissionless, length, but the play is simply too superficial (an example being Natalie’s fondness for MADAME BUTTERFLY, which hits us over the head with the obviousness of its mixed-race romance), its characters too stereotypical, and its few attempts at humor forced. An example of the latter is when the presumably unsophisticated Natalie visits an Italian restaurant for the first time and pronounces minestrone as “myne-strown.”


The actors still seemed to be feeling their way through the material on opening night, and the ensemble had yet to fully find its footing. Technical problems were evident in the way scenes were joined; a scene would end with an anticlimactic and poorly timed fadeout and there would be an unnecessary delay before the start of the following scene. Full disclosure: the director, Allen Lewis Rickman, is a former student of mine, best known as an outstanding actor in Yiddish-related material. I suspect his experience in the highly colored emotional theatrics of Yiddish theatre may be responsible for some of the acting choices on display, especially in the work of Peter Van Wagner, who shouts and shrugs in a way that overemphasizes Sam’s ethnic background and makes him too obnoxious for the pathos in the role to be conveyed. The best work is provided by Lori Wilner as Rose, despite the difficulty of accepting her as 38. (Equally difficult to buy is Mr. Wagner as a 50-year-old.) She brings a quiet cynicism and restrained desperation to her performance that suggests a level of reality the other actors fail to match.


DANCING ON NAILS is an earnest attempt to come to grips with a time and place in American racial relations that is still within the living memory of many people. In today’s world, where interracial marriages, at least in certain parts of the country, are taken for granted, it may be hard for some to appreciate how far we’ve come. The lady on the train was certainly appreciative of our progress. This play serves as a useful reminder, even if watching it now and then feels a tad like what its title says. Perhaps thumbtacks would be better.
Posted by Samuel L. Leiter at 2:42 PM