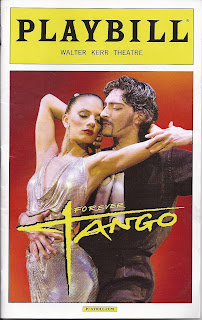 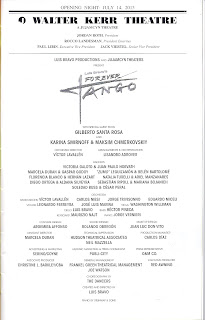 When you enter the Walter Kerr Theatre you are faced by the increasingly unfamiliar sight of a formal Broadway curtain, bright red, fringed in huge gold tassels, and highlighted with gold flourishes along its swags. Aside from several stunning gowns worn by the female dancers in this return visit of FOREVER TANGO, this is the biggest blast of color on display in this dance and concert show, which first appeared on Broadway in 1998 (458 performances and four previews) and returned in 2004 (114 showings plus six previews). The present show is set for a limited run of ten weeks. A comparison of its 2004 program with the current one reveals that perhaps half the show is new, and the other half old, although almost the entire company has changed. Luis Bravo, who created the original and has been with the show throughout its history, remains the director. The choreography, as in the past, is credited to "The Dancers." 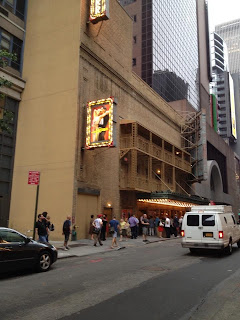 
The cast is composed largely of champion tango couples, and each gets to demonstrate its innovative versions of Argentina’s passionate national dance. Unlike its earlier incarnations, which had no specific stars, the present FOREVER TANGO lists three guest stars, singer and five-time Grammy winner Gilberto Santa Rosa (to be replaced on July 30 by Luis Enrique), and dancers Karina Smirnoff and Maksim Chmerkovskiy, the exceptional Ukraine-born pair who became famous on TV’s DANCING WITH THE STARS.


There are several company numbers that involve all or most of the dancers, but most of the evening’s dance sequences are performed by couples, each more sensual, dramatic, and physically enthralling than the other. The women, of course, with their heads of radiantly gorgeous hair, are icons of sexy glamour, dressed in stunningly slinky gowns from which perfect, stiletto-heeled legs thrust, twist, and kick in surprising permutations, as supple derrieres suddenly shimmy faster than the speed of light. Their men, often dressed in black, sometimes with rakish fedoras, are sleek panthers, their Valentino hair so slick you could skate on it, capturing a sense of lust and danger as they smoothly maneuver their women around the stage in ever more flashy combinations, with each routine ending in an inventive pose suggestive of domination and submission. As appropriate for the tango, the mood is deadly serious, with eyes focused on some ulterior goal, or locked with one’s mate in intensely electric contact. Everyone is conscious of their own gorgeousness, and during the curtain calls, several female dancers, especially the spectacular Victoria Galoto (she’s on the program cover with Juan Paulo Horvath), revel in it. Two dancers, Natalia Turelli and Ariel Manzanares, however, do a couple of comically inflected dances that allow some smiles to break into the otherwise somber proceedings. 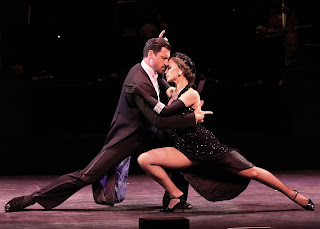 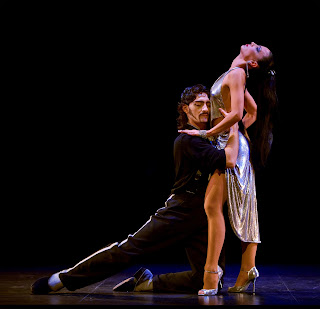 Juan Paulo Horvath and Victoria Galoto. Photo: Walter McBride
There is no set to speak of, just a black backdrop on which stars are sometimes illuminated, and a two-tier platform for the 11-member orchestra of four bandoneons (something like a cross between a concertina and an accordion), two violins, a viola, a cello, a bass, a keyboard, and a piano; Víctor Lavallén, the bandoneon player-conductor, displays his virtuosity at several points. The dancers perform downstage of the musicians, who remain in view throughout. Since all but one of the musicians is gray or white-haired, their appearance makes a striking contrast with the youth and beauty of the dancers.


The show is not all dance by any means. Guest star Gilberto Santa Rosa, wearing a tuxedo and carrying a mike, does several solos (all the songs are in Spanish), and a rather hefty portion of the evening is devoted to instrumental performances. These non-dance segments bloat the evening to a too-long two hours and 15 minutes (with one intermission). Still, few people chose to leave during the extended, danced-through curtain calls.


But even without the concert-like performances, a show like this, no matter how talented or good-looking the dancers, is likely to pall unless you’re an avid dance fan. If you’re addicted to TV dance contests, you may find a couple of hours of this stuff delightful, but, remember, the dancing is all tango (or tango-like) so the lack of variety can eventually be problematic, there’s no thematic through-line that contextualizes what you’re seeing, and all the singing is in Spanish. By the end of act one, I felt I’d had a good time and had seen enough. Sitting through act two of FOREVER TANGO began to make me feel like the title might actually come true.
Posted by Samuel L. Leiter at 9:01 AM