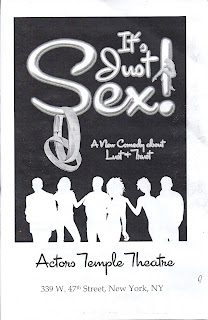 When Jeff Gould’s IT’S JUST SEX begins, the scene is just what you might expect from a play with such a title. Phil (Matt Walton), a handsome man in his briefs and a rumpled shirt and tie, and Amanda (Molly Fahey), a brunette hooker in lingerie who could be straight from a Victoria’s Secret catalogue, are carrying on hot and heavy; Amanda is on the couch with her legs signaling V for victory and Phil’s head is zeroing in on its target when Joan (Jackie Debatin), Phil’s beautiful blonde wife, walks in on them. That, however, is one of the very few suggestions of onstage sex in this woefully unfunny play that has transferred to New York from Los Angeles, where it was purportedly a hit. Maybe LA has a different vibe when it comes to this kind of banality, but the best thing I can say about IT’S JUST SEX is that, while it shares the same stage at the Actors Temple Theatre with CUFF ME: THE FIFTY SHADES OF GREY UNAUTHORIZED MUSICAL PARODY!, it’s not nearly as bad. Oy vey!


Let me clear one thing up right away. Despite the title’s promise of naughty farce in the vein of NO SEX PLEASE, WE’RE BRITISH, which seems a classic by comparison, IT’S JUST SEX is actually a mildly serious attempt at a comedy-drama about marital sexual relations. If it didn’t have three couples, instead of two, you might consider it a very distant relative of, believe it or not, WHO’S AFRAID OF VIRGINIA WOOLF? Of course, that probably wasn’t playwright Gould’s intention, but when you have a couple in a strained conjugal relationship hosting a cocktail party for two similarly troubled couples and the evening slowly devolves into a wife-swapping situation and its inevitable aftermath of regret, recrimination, and reconciliation, it’s hard not to remember VIRGINIA WOOLF’s invocations to “Hump the Hostess.”


On the plus side, the cast is attractive, all of the women especially so. And they're not untalented; just not used well. And that, more or less, is the plus side.


As noted, Gould has created a situation in which, as a result of a night of spouse-swapping, each couple is placed in a position where, sparked by a game of “Tell the Truth,” they are forced to confront their particular marital problems. The issues are familiar and not without import, but their treatment is clichéd and unimaginative. To his credit, Gould tries to balance the serious implications of the various conflicts with humor, and comes closest when one of the men, Greg (Michael Colby Jones, in the show's best performance), who has been having impotence problems, declares that his wife, Lisa (Elaine Hendrix), is always undercutting his manhood. Greg is challenged to name one example, so he whips out his smart phone, where he’s recorded every instance, and recites a litany of her put downs, something I wouldn’t be surprised many in the audience wish they’d thought of themselves.


The biggest problem with IT’S JUST SEX is that it isn’t.
Posted by Samuel L. Leiter at 8:28 AM