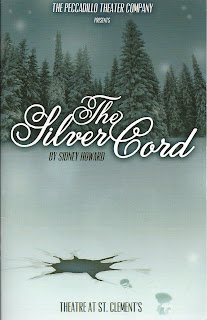 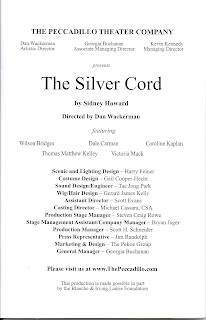 In light of the current revival of Sidney Howard’s THE SILVER CORD at the Theatre at St. Clements, I am appending here an adapted and abbreviated version of the play’s entry in my ENCYCLOPEDIA OF THE NEW YORK STAGE, 1920-1930. That production opened on Broadway on December 20, 1926,  in a Theatre Guild production directed by John Cromwell. Mrs. Phelps was played by Laura Hope Crews, David by Elliot Cabot, Robert by Earle Larimore, Hester by Margalo Gilmore, and Christina by Elizabeth Risdon. All were major Broadway players of the 1920s.  (The 1933 movie version starred Laura Hope Crews in her original role, with Irene Dunne as Christina, Joel McCrea as David, Eric Linden as Robert, and Frances Dee as Hester.)

A Best Play of the Year, and one of the better remembered plays of the decade, THE SILVER CORD was a fierce indictment of the emotional and psychological havoc that possessive maternal affection could wreak. . . . As a study of a woman’s selfish obsession, it was compared to plays such as George Kelly’s CRAIG’S WIFE and August Strindberg’s THE FATHER. Many noted the Freudian implications of its Oedipal theme.


Mrs. Phelps keeps her two grown sons, David and Robert, clinging to the symbolic umbilical cord to the extent that when Robert becomes engaged to Hester she manages to sever the relationship; the older and slightly more independent David nearly finds his marriage to Christina coming apart, but Christina’s [I mistakenly wrote Hester, who, however, also stands up to Mrs. Phelps] forthrightness (Brooks Atkinson called it “Shavian”) in confronting her soon-to-be mother-in-law makes him see the light. David frees himself from Mrs. Phelps’s clutches; not so the weakling Robert.

Some thought Mrs. Phelps was too exaggerated a monster for complete believability, and the last act’s resolution (Richard Dana Skinner called it “almost a lecture on the previous acts”) seemed tagged on; criticism also focused on the play’s lack of action and verbosity. But it was a vivid play for actors, and the Guild’s notable cast made the most of their chances. Atkinson found it “enormously exhilarating” theatre and approved loudly of its “flavorsome dialogue that depicts character and holds the interest at the same time.

Some of the original reactions to the play still hold water. By and large, however, the Peccadillo Theater Company’s mostly undistinguished production, directed by Dan Wackerman, only exacerbates the play’s weaknesses, THE SILVER CORD seems quite dated, with its overly elaborated and self-conscious dialogue. Lines that probably were shocking in 1926 now merit titters. Worst of all are the male characters, whose worship of their mother (Robert keeps calling her his “blessed, blessed mother”) and blindness to her blatant wickedness seems so pathological that it is impossible to find any sympathy for them. Instead you so want to scream at them that when Hester, and then Christina, tell her off, you realize how mismatched these strong women are with such world-class wimps. 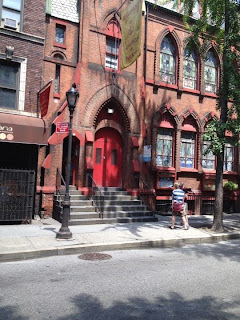 
Making things even worse is the misguided decision to cast a male actor, Dale Carman, as Mrs. Phelps. While Carman, who is clearly at home in drag, gives the most intelligent performance in the production (he played it for the same company 18 years ago), he is unable to escape either his gender or his unique facial attributes; despite his playing the role “straight,” ahem, his presence is a constant distraction and robs the play of any persistent impact it might have if a woman were playing this aggressively controlling mother. (Charles Busch, by the way, played Mrs. Phelps in a reading earlier in the year.) Is the production suggesting that such a woman can only be accepted if she has a strong masculine streak in her? Is there a gay agenda at work that seeks to explain the boys’ unyielding affection for their mother by having her played by a man? The production certainly seems inclined in this direction by its inclusion of a scene in which Dave is shown with his bare ass facing the audience as he changes into his pajamas (something that would have padlocked the theatre in 1926), or scenes in which one or the other of the young men hold their mother in intimate embraces, with Dave even kissing her at length as they lounge together in bed. Methinks the director hath been watching too many reruns of Olivier’s HAMLET.


The action all takes place on a wintry February day in 1926 at Mrs. Phelps’s home in an Eastern American city. Set and lighting designer Harry Feiner creates a sense of outdoors and indoors by placing his interiors downstage where they are backed by a silvery painted backdrop showing frosty pine trees. The wall-less living room set has a fireplace at stage right and windowed areas upstage and stage right. Detailed period furniture and chintz effectively establish a conventionally old-fashioned living room. However, those nefarious destroyers of theatrical reality known as stagehands enter in dim light to change the set to David’s bedroom and back again to the living room, once more making it clear how damaging to theatrical illusion for plays like this is the absence of a curtain. And despite the alterations, the place doesn't look much different from the living room. Moreover, Mr. Feiner places a cramped and tiny bed at center, almost as if Mrs. Phelps arranged it so David wouldn’t have sex with his wife on it.

Gail Cooper-Hecht’s costumes for the women seem appropriately authentic, but when David dons evening wear, its poor fit makes actor Thomas Matthew Kelley, who is rather tall, resemble Lurch in THE ADAMS FAMILY. At the end, as he, Hester, and Christina prepare to leave, he dons a heavy overcoat, but the ladies depart coatless, each carrying a piece of luggage that seems to weigh half a pound. These visual bloopers show a careless disregard for artistic integrity.

Despite its overwrought dramatics, its cluttered dialogue, its old-fashioned locutions, and its stagy theatrics, THE SILVER CORD does, in fact, come to life when each of the women stands up to the old harpy, and when Christina, a biologist who represents the “new woman” of the times, lays it on the line to her namby pamby husband in act two (of three). But the performances of Caroline Kaplan as Hester, Thomas Matthew Kelley, Victoria Mack as Christina, and Wilson Bridges as Robert fail to embody their characters with any depth; Bridges, in particular, seems at sea in this milieu.

For those interested in a peek at what 1926 audiences viewed as daring drama, the play offers an interesting history lesson. But as quality theatre, 87 years after it was created, THE SILVER CORD has become hopelessly tarnished.
Posted by Samuel L. Leiter at 12:50 PM