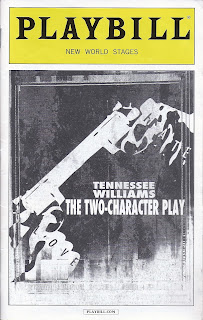 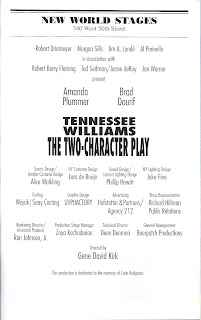 A lot of serious theatergoers get excited whenever a new revival of a Tennessee Williams play lands on the boards, but some may forget that there are two Tennessee Williamses. Most familiar is the lyrical, sensual, and psychologically penetrating dramatist who gave us such great American classics as A STREETCAR NAMED DESIRE, CAT ON A HOT TIN ROOF, and THE GLASS MENAGERIE. However, even in those plays there are hints of the experimental playwright who would emerge full blown in the 1960s, discarding conventional narrative for more untraditional methods in works like THE MILK TRAIN DOESN’T STOP HERE ANYMORE, IN THE BAR OF A TOKYO HOTEL, and THE TWO-CHARACTER PLAY. These later plays were all critically and commercially unsuccessful, yet Williams himself supposedly found fulfillment in them, calling THE TWO-CHARACTER PLAY “my best play since CAT. Maybe better.” I beg to differ. 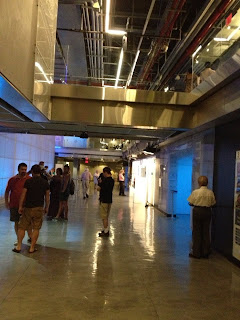 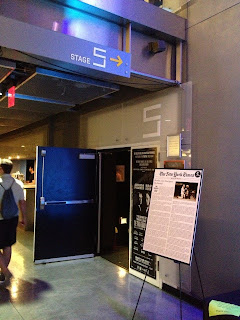 
The Broadway premier of THE TWO-CHARACTER PLAY (originally titled OUT CRY), which starred Michael York and Cara Duff-MacCormick, ran for only 12 performances in 1973. There are only two reasons I can offer to see its current revival, directed by Gene David Kirk (who previously staged a similar version in London with other actors), at New World Stages. Those are the performances of Brad Dourif and Amanda Plummer, who both fit snugly into the schizophrenic personas of the siblings Felice and Clare, the title characters. Both actors have made much of their reputations by playing kooky, unstable characters, and Plummer, especially, knows how to bring to vivid theatrical life someone whose balminess is convincingly, if not painfully real. Like her celebrated father, Christopher, whom she increasingly resembles, she possesses not only a talent for incisive character embodiment, but vocal powers that allow her to use her instrument in countless expressive ways. Unfortunately, she and her costar, like the characters they play in this revival, are trapped in a drama from which there is no escape until the run whimpers to its end. (The theatre was perhaps 60 percent full at the start; after the intermission, about 40 percent remained.)


Ironically, THE TWO-CHARACTER PLAY is playing in New World Stage’s Stage 5 venue, where I was subjected last season to the Japanese torture of Williams’s IN THE BAR OF A TOKYO HOTEL. The leading actress in that ill-fated production kept calling for her lines, and, oddly, there’s a moment in THE TWO-CHARACTER PLAY where Ms. Plummer also calls “Line!,” but here it’s part of the script—or is it? My query arises from the context of the action, which imagines that Felice and Clare, having been determined by the other actors in their company to be insane, have been abandoned (in “a deep Southern town called New Bethesda”) and left to their own devices. Convinced that the show must go on they agree to perform their own “Two-Character Play,” which imagines them to be themselves, a reclusive brother and sister confined within the house in which they grew up, where their father killed their mother and then shot himself (a gun plays a part in the performance). There they are subjected to fear of the outside world, represented by abusive neighbors. Themes of isolation, claustrophobia, confinement, agoraphobia, fraternal dependency, and the like play out during the play within the play as we wonder what is real, what is illusion, what is performed, and what is lived. There are clearly autobiographical strains at work, most notably Williams’s relationship with his own sister, Rose, who was lobotomized.


Everything takes place within the rickety-looking framework of Alice Walkling’s unattractive stage set, which indicates with lumber alone where the walls should be. Two giant sunflowers, symbols of something or other, are painted on the upstage wall, visible through the framework. The lighting is presumably manipulated by Felice, who frequently retires to an offstage switch to noisily bump up the intensity or create a new effect, although this conceit (and, it could be argued, that of the entire production) gradually is forgotten as the lighting devolves into cues handled by an actual technician, as when the play ends with Felice and Clare in a spotlight that isolates them before going out. If they’ve been abandoned, why is someone lighting them so dramatically? (The so-so lighting is by Jake Fine.) If the play followed Williams’s own dialogue, it would just end, with no special effects, and the audience might not even know it was over when it was.


Still, this is the kind of talkative play, filled with pregnant pauses, where logic is not foremost on anyone’s mind, and all that counts is whether you can sympathize with the plight of these lost and helpless thespians, ensnared within the metaphoric world of theatre itself, a moody place where imagination can run free, but where it is sometimes difficult to come to grips with the difference between sanity and madness. Making sense of the “plot” from moment to moment is fruitless; Williams seems too enamored of the excesses of the era’s experimentalism, as seen in the far superior plays of Beckett and the early Pinter. You will either be bored to exhaustion (as I was) or intrigued by this little-seen facet of a favorite playwright’s art.
Posted by Samuel L. Leiter at 2:42 PM