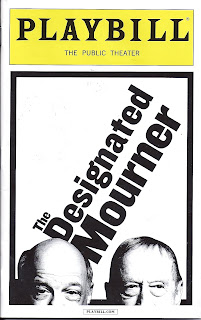 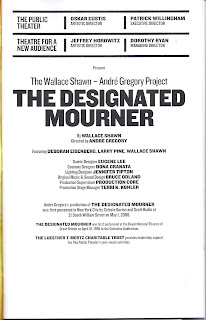 There is some very interesting chatter going on in the Shiva Theatre, on the first floor of the Public Theatre. The chatter is embedded in, or should I say embodies most of, THE DESIGNATED MOURNER, Wallace Shawn’s play, which originally was staged at London’s Royal Court Theatre in 1996, had its New York premiere in a South William Street venue seating only 20, and, with the same three actors from that production, is now being revived in front of 99. The play is in two acts, and, the night I saw it, enough people to fill all the seats at the 2000 performance had departed after the first act, which lasts about an hour and 45 minutes. Even before that, after only half an hour or so, two men clomped out noisily, making me wonder if Mr. Shawn, watching them go from his seat on stage in the role of Jack, might offer some comment, much as he had when a couple of latecomers arrived about 10 minutes into the show. He told those people not to be too concerned, that nothing much had happened, and that he’d merely been talking about this and that to the audience before they arrived. No one else came late, but had they, even toward the end of the three-hour performance, Mr. Shawn could almost as easily have said the same thing, i.e., that nothing much had happened and he’d merely been talking to the audience about this and that. But therein lies the rub, since you must pay attention in order to appreciate that more than this and that is being said. The problem is that the style of the writing and performance can easily deter the kind of strict attention the material requires.


THE DESIGNATED MOURNER does have a plot, more or less, and concerns three people living in an unnamed country, possibly Latin American, under a dictatorial rule. The political activities in the background are never made precisely clear. When the conservative government begins to fear an uprising by guerrilla forces, it purges thousands of citizens, imprisoning and executing many intellectuals, regardless of how tenuous their relationship to the rebels. Jack is a disaffected English professor, his father-in-law is a noted poet named Howard (Larry Pine), who wrote on politics in his youth, and then there is Jack’s ghostlike wife, Judy (Deborah Eisenberg), her sharply angled face wearing eerie whitish makeup with her lips brightly reddened; Jack has cut himself off from Judy and Howard, even taking up with Peg, a lemonade stand girl. Jack considers Howard a “highbrow” and fears the elimination of “lowbrow” culture if the revolution succeeds. He recounts how he expressed his growing disdain for highbrow culture by defecating on a book of John Donne’s poetry. Howard and Judy meet their demise, leaving only Jack, who is not unhappy to see their loss and who remains as the designated mourner, the one who remembers those no longer with us, in this case the effete artist-intellectuals who did nothing to assert their responsibility in their oppressive society. 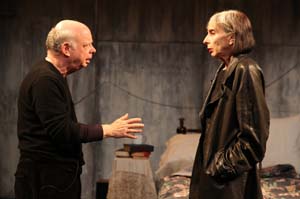 Wallace Shawn and Deborah Eisenberg in THE DESIGNATED MOURNER.


Described thusly, the play would seem to demand some sort of dramatic action, but Shawn deliberately avoids providing it. What we learn of the political background comes out in long, discursive monologues, only occasionally broken by flashback conversation, with the characters speaking, for the most part, directly to the audience. The actors sit in chairs or on a double bed upstage. Movement is minimal. No one raises their voice, the tone remains civilized and conversational, and a fundamental sincerity is conveyed, but never in a confrontational or overtly emotional way. When the evening ends, if you’ve stuck it out, you may be hard put to isolate clearly what on earth you’d been listening to for so long. You might take away some thoughts on complacency in a totalitarian society where the elite are allowed to survive until they come to be seen as a potential threat; you may wish to meditate on the difference between highbrow and lowbrow culture, and what this means for society; you may contemplate the idea of intellectuals struggling unsuccessfully to stay above the fray in a fascist dictatorship; but no real effort is made to make this or any other point the play’s driving force. You come to the theatre, you listen to the chatter, and you go home, either to go over in your mind what you’ve just experienced or to simply move on to something else. To emphasize the casual nature of the experience, Mr. Shawn simply walks off through a door at the end, waving goodbye. He then reappears on the auditorium floor to again wave the audience home. There is no curtain call.


With three superb actors speaking the words (and Mr. Pine, Mr. Shawn, and Ms. Eisenberg are definitely that), the majority of them delivered by the always affably entertaining and incisively acidic Mr. Shawn, there is definitely enough here for some audiences. Those who saw the earlier New York performance (with the same cast and director, André Gregory) were reportedly absorbed in the venue’s living room-like ambience, where they were like guests invited to share in their hosts’ rambling ruminations.  In the larger space of the Shiva, intimate as it is for most purposes, that sense of communal interplay—at least to someone who missed the 2000 version—seems lost. The seating is on bleachers, with the all the chairs covered in white cotton slipcovers, their numbers stenciled on in black. They face a wide stage on which John Lee Beatty’s set presents walls painted to resemble concrete slabs, much as in a prison (a motif continued into the auditorium), and there are doors at both sides of the stage, as well as a window at stage right suggesting an odd jumble of windowpanes. There are a few pieces of furniture, dominated by a double bed at center. In one of the few modest pieces of staging, all three characters sit or lie on the bed, which is where Howard, presumably ill, remains most of the time. In act two, with Howard gone, the bed and most other furnishings are piled together under a gray cloth against the rear wall.


Apparently, to make sure we don’t miss anything, each actor wears a mic that is placed on him or her by a stage assistant in full view of the audience. In act two, standing mics are used. The effect may be intended to heighten the self-dramatization of the speeches, although I did appreciate the enhanced audibility of the speaking.


To a certain extent, logorrhea can be engrossing when, as is the case here, what is being said is clever enough, but when the pacing and performance style resist traditional theatrics over an extended time period, boredom and restlessness are sooner or later bound to arrive. If your appetite runs in this direction, you will find enough here to satisfy you. I was only half-satisfied.
Posted by Samuel L. Leiter at 10:07 AM