63. Review of MURDER FOR TWO

When we enter the McGinn/Cazale Theatre to see MURDER FOR TWO, which won Chicago's 2011 Jefferson Award as best new musical, we see a false proscenium arch framing a stage carefully arranged to look more or less scenery-less, its rear brick back wall prominent and accented by a red curtain hanging upstage right. A grand piano and various props inspired by the game of Clue are noticeably displayed. The walls downstage of the arch are richly paneled, just like the wide pillars at either side supporting it, each with swinging doors built into them. A green border outlines the false proscenium, with many bulbs that flash on and off when needed. (The terrific lighting is by Jason Lyons.) This is Beowulf Boritt’s attractively designed metatheatrical background for what turns out to be an occasionally entertaining but disappointingly overdone two-man musical  about a murder investigation (book by Joe Kinosian and Kellen Blair, lyrics by Mr. Blair, and music by Mr. Kinosian). 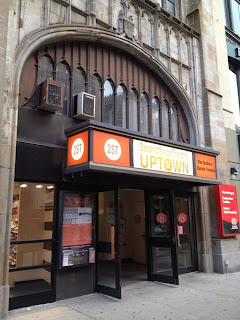 The McGinn/Cazale Theatre, at Second Stage Uptown, on Broadway and W. 76th Street.
Only a piano is used for the songs, but it is played with over-zealous show biz virtuosity by the two stars, Jeff Blumenkrantz, who enacts all the suspects, and Brett Ryback, who portrays Marcus, the investigator. The piano playing is woven into the physical staging, as the actors play on it both in turn and in tandem, not only while singing but to provide musically accented background to the action in which they themselves never stop participating. At the end, as a coda, the actors move a mirror into place to reflect their hand movements during a medley of complex playing.


MURDER FOR TWO is a spoof of Agatha Christie-type murder mysteries and the game of CLUE, with the earnest but sometimes stumbling young plainclothes cop (who, in Mr. Ryback, suggests a cross between a young Rob Lowe and Billy Crudup), interrogating a series of eccentric characters in a wealthy New England home; true to the genre, even he himself becomes a suspect. Mr. Blumenkrantz, whose multiple roles require protean powers, is tall, lanky, and bald, characteristics he works hard to exploit. To jump from role to role, which he seemingly accomplishes sometimes in midsentence, he may don a pair of round-rimmed glasses, put them on his forehead, hold his hands a certain way, alter his voice or accent, change his posture, use an identifying hat or prop (like a pink silk scarf or feather boa), and so on.  Everything is played at racing speed; the actors must have little body fat left at the end of the show. Pantomime creates most of the props, including using two fingers to “shoot” someone, and there are excellently executed sound effects (by the ubiquitous Jill BC Du Boff) to heighten the presence of the invisible props, as when something drops. For some reason, though, the sound of a cell phone ringing (the trigger for Mr. Blumenkrantz to give dirty looks at the audience as if it comes from them) sounds more like a landline phone than a cell. Visible props are scarce, but memorable, especially a suitcase that opens to reveal severed body parts.


The plot has Marcus Moscowicz investigating the shooting death of “great American novelist” Arthur Whitney, whose body is presumably lying on stage amidst his many famous books; their titles are often used for punning jokes. Marcus is a policeman who thinks he will be promoted to detective if he solves the case in the hour before the real detective arrives, and therefore passes himself off to the suspects as if he already holds the rank. Constantly citing (or singing about) “protocol,” Marcus narrates the action while engaged in it. The stereotypical suspects include Barrette Lewis, a ballerina; Dahlia, the victim’s Southern belle wife; Dr. Griff, a gruff psychiatrist (who is also Marcus’s shrink); a nastily bickering old couple, Barb and Murray (Murray accuses Barb of being the killer); a dozen mischievous choir boys with Brooklyn accents, there to sing at the dead man’s birthday party, and performed by Mr. Blumenkrantz on his knees; and Steph, a niece who is writing a thesis called “How to Assist in the Solving of a Small-Town Murder.” Everybody has a motive for wanting Whitney dead (he exposed their secrets in his books), complicating the investigation but mirroring classic murder stories. There will be other deaths before the evening ends (an audience member is recruited to play a second corpse), and, of course, the murderer is not who you might have chosen yourself (that is, if you’re able to keep up with or remain interested in the many deliberately squiggly plot developments).


Mr. Kinosian’s music is mainly rhythmic support for Mr. Blair’s rapid-fire and often very clever lyrics, and many of the songs are more in the telling-the-story vein than extended numbers dealing with a theme. But these also have their place, and I particularly would like to hear “A Friend like You” (I think that’s its title) again. Mr. Kinosian’s book is in the Marx Brothers style of anything-goes silliness, often surrealistically so, always in search of a cheap guffaw.  An early example is when a character calls the police and dials Domino’s Pizza instead, even reciting the seven-digit, so-clearly-not-911 number, and doesn’t hang up until ordering pizza for the assembled witnesses.


There’s a lot going on in this 90-minute tour de farce, and the actors do everything in their power to achieve its many technical demands, but, despite Scott Schwartz’s usually inventive staging, he hasn’t been able (or perhaps is unwilling) to tamp down the frequent shouting, which, especially in the case of Mr. Blumenkrantz, often borders on the shrill and charmless. And shrill ain't funny. The effect is of an overly extended vaudeville sketch, taken beyond its limits, with two talented singer-actor-pianists demonstrating their theatrical dexterity and versatility. These actors have those qualities; what’s missing is the “x” factor that makes good farce hilarious, not just occasionally amusing.


MURDER FOR TWO doesn't pack enough comic heat to be a killer.