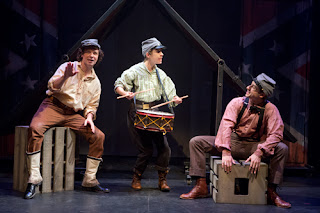 An hour and a half after leaving WANDA’S MONSTER near Union Square, I was sitting at the Lucille Lortel watching another play aimed at kids, but this one was for somewhat older ones and its subject was a real monster, America’s Civil War. Arthur Perlman’s THE CIVIL WAR, a small but ambitious musical recounting the horrendous conflict that saw America at war with itself in the 1860s, may have “education” written all over it, but, for all the horrors it depicts, it turns out to be a damned good show. Maybe too good for its own sake, since a one-hour musical about a conflict that took well over 600,000 lives is not necessarily something you want to walk out of with a lighter step than when you went in.


Provided free to children (grades 3 to 9 are aimed at) as part of a special program by the excellent Theatreworks company, THE CIVIL WAR--a touring show in its New York premiere--uses a cast of only five multitalented performers, four men and a woman, to cover the war’s history. That history is embedded in the personal stories of a runaway slave, Zac (Max Kumangai), who goes to war for the Union army; his former owner’s son, Will (Adam Fontana), once his boyhood pal, who fights for the South; a girl, Jackie (Alyce Alan Lewis), who so wants to join the Confederate army that she enlists as a drummer boy, hiding her gender; and an Irish immigrant named Johnny (Jim Stanek) who joins the Union army.


Most of the music is traditional, including “Father Abraham,” “Dixie,” “Free at Last,” “The Fighting 69,” and “When Johnny Comes Marching Home Again,” but, strangely, “The Battle Hymn of the Republic” is omitted. An energetic new song, "The Tale of the Blue and Gray," credited to Jeff Lunden (music) and  Arthur Perlman (lyrics), is seamlessly woven into the show's musical fabric. The music is cleverly integrated with the highly episodic book, which encompasses, sometimes tongue-in-cheek, the principal highlights of the five-year hostilities. A running theme is the repeated attempts of the Union army to capture Richmond, Virginia, with one famous general after the other—all portrayed by the Falstaffian Michael Thomas Walker (who also gives us a rotund Lincoln) as fatuous braggarts—until the appearance of Ulysses S. Grant. To illustrate the progress of certain major battles, a wall map is used on which magnetized Northern or Southern flags are placed over the named locales. 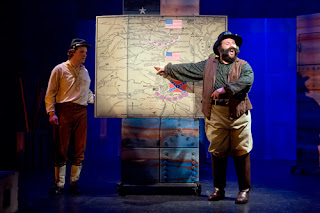 
Although each actor has a principal role, they also play others, switching from gray to blue civil war caps to indicate which side their characters are on. They perform with sprightly energy, sing effectively, move in well-imagined choreographic patterns (created by Tracy Bersley), and even do an Irish jig at one point. The company works fluidly as a true ensemble and deserves warm plaudits for its enthusiasm and sincerity. The performances don’t seek subtlety, but manage nonetheless to be truthful and convincing even when their roles sometimes border on the cartoonish; one amusing scene, for instance, has two male actors playing women wearing hoop skirts, but with only the hoops showing and not the skirts. 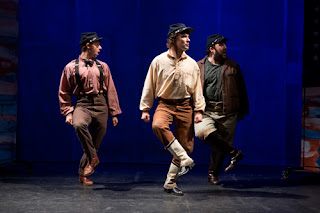 Left to right: Adam Fontana, Jim Stanek, Michael Thomas Walker in THE CIVIL WAR.
Director Jonathan Silverstein must be given a tip of the hat (regardless of its color) for bringing this potentially problematic material to life with imaginative flair on an essentially bare stage. Designer Kevin Judge furnishes the space with just a few crate-like boxes and four vertical panels on wheels, seen at first with a rough painting of the Stars and Stripes linking them together. During the action they are maneuvered into intriguing new combinations, and their surfaces provide flaps and openings that allow for additional visual interest. They can also be tilted and used in battle as tank-like weapons. Sydney Maresca’s costumes, deceptively simple, allow the characters to remain strictly in period while adding additional accents when needed to suggest the differing characters wearing them. Half a dozen poles serve as universal props, being brooms, guns, or carrying poles as needed. Tying the visual elements together into a truly effective whole is David Lander’s wonderfully diverse lighting, including the strobe effects he employs for several slo-mo battle scenes or the specials that illuminate a soldier who has died in combat.


THE CIVIL WAR succeeds in squeezing an enormous amount of material into an easily digestible hour of entertaining pedagogy. The personal stories are stereotypically familiar, but they clearly dramatize the choices that some people had to make in those trying times. Despite the deaths we witness (and there are several), the tone veers toward the elegiac only momentarily, and the spirit is mostly upbeat and inspiring. This may not be true to history, but the important points are made effectively enough to register with most young people. We learn, for one thing, that despite the need for cannon fodder, the North at first refused to enlist black soldiers. “Your kind ain’t allowed,” says a recruiter, and the would-be soldier replies, “They need 300,000 and they’re showing me the door,” which surely registers with many kids. (In 1863, necessity forced a change in the law, which certainly didn’t stop anti-black feeling in the Union army.) Another important one is that not everyone in the South saw the war as having to do with the slavery issue. Many fought because they simply believed they had to defend their rights from the government’s encroachments.


Naturally, in such a reductionist piece, some standard points, necessarily or not, will be overlooked. For example, no mention is made of Lincoln’s death, not even during the postscript segment that concludes the show. And, even though Gettysburg is touched on, Lincoln’s address there is not.  There’s nothing new, of course, about carnage being the source of entertainment, and if one child in ten emerges from THE CIVIL WAR with a better idea of what transpired than they had when they went in, the show will have done its job.
Posted by Samuel L. Leiter at 1:48 PM