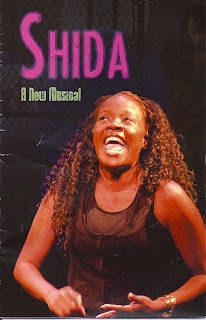 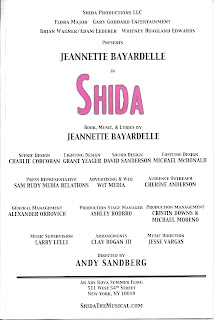 Jeannette Bayardelle is an exceptional performer. She is a passionate, committed, and versatile actress, and is gifted with a voice powerful enough to make you both remove your assisted listening device and let the sound waves blow-dry your hair. In her new, one-woman musical, SHIDA, at Ars Nova on W. 54th Street, she has added to those talents the accomplishments of book and lyric writer and composer. Backed by a four-piece ensemble of keyboard, drums, guitar, and bass, on a simply designed set that places the musicians upstage behind translucent plastic panels, with a semblance of a fire escape downstage right, she tells the story of Shida, a high-IQ African-American girl who grows up in the Bronx wishing to be a writer and struggles to overcome the difficult circumstances she encounters. It is a story of survival despite all odds. As demonstrated by the truly appreciative applause the night I saw it, when many theatre professionals were present, some audiences will surely find it moving and inspirational. Others, like me, may find it predictable and clichéd. I have a feeling I’m in the minority, but so be it. 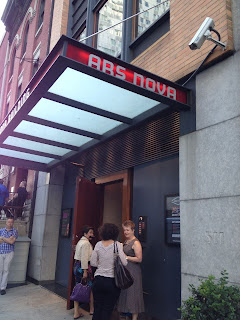 
To tell this purportedly true story she plays half a dozen characters, shifting from one to the other rapidly and with the simplest means, as in so many other shows requiring an actor to play multiple roles (MURDER FOR TWO being a recent example). We first meet Shida as a surprisingly well-read, fourth-grade school child at St. Mary's Catholic School, where she meets Ms. Smalls, the sensitive teacher who encourages her interest in writing poetry like Phillis Wheatley. At school she is befriended by Jackie, a double-dutch jumping home girl embodying stereotypical speech and physical mannerisms—smarmy side to side head movements, disingenuous eye popping, both hands flipping the second through fourth fingers open and shut, swaggering hair tossing, and calling Shida “girl” on every other line. Jackie, for all her jiving attitudes, becomes Shida’s lifelong and sincerest pal and is there to help her when things come crumbling down. And they certainly do when, after five years of sexual abuse by her mother’s boyfriend, “Uncle Steve,” an abortion, her mother’s losing battle with cancer, a failed relationship with a woman who looks like a man, crack addiction, prostitution, and beggary, she questions God’s existence but ultimately finds redemption during a stint in rehab. Shida eventually emerges on top, ready to move forward at City College and take advantage of her abilities.


We’ve seen stories like this before, and there are no surprises in store. The minute little Shida begins talking to her “Uncle Steve,” who is helping her prepare for her spelling bee, you know where the relationship is going. Still, even after five years of his being “on top of me,” to which her mother turns a blind eye, she seems to overcome her trauma; after initially falling off in her grades, she turns things around and becomes a straight-A student. When she enters NYU on a scholarship and befriends Joe, a nice white guy who tutors her in math, you know something not kosher will happen, which does when he turns out to be a drug dealer and, despite her protestations, talks her into getting high. This, of course, starts her on the road to perdition, largely, it seems, because she can’t shake the traumas of her childhood and her mother’s death, which, tragic as they are, seem, given the strength of Shida’s character, forced motivations. Her mother remains sainted in her eyes, even though it took her five years before she kicked out the freeloader who was serially raping her daughter; it seemed to me that this was something she might have figured out earlier despite Shida’s keeping silent about it. In other words, common as such experiences may be in many people’s lives, they appear contrived here for the sake of dramatic expediency.


Although there are spoken passages, most of the show is sung, with 20 songs listed in the program, each marking a step in Shida’s evolution as a young woman. As the show’s press release notes, they cover a variety of styles, including rock, jazz, R&B, and gospel music; there is also a bit of hip-hop from one of Shida’s boyfriends, but its inadequacy is recognized by Shida herself and quickly ended. All the songs are listenable, but too many sound alike, and some seem to have been written merely to offer Ms. Bayardelle opportunities to demonstrate her ear-splitting belting powers in the vein of DREAMGIRLS’ “And I Am Telling You I’m Not Going.” So assured is Ms. Bayardelle of her vocals that in one number, while she is in the middle of one of her highest and loudest notes, she actually breaks character along with the fourth wall to encourage the audience to clap! I wasn’t sure how we were supposed to take her story seriously after that. Director Andy Sandberg never should have condoned such self-promotion, regardless of the audience's laughter.


SHIDA deserves to be seen for the performance of Jeannette Bayerdelle. The friend I saw it with, an experienced young theatre professional, was extremely impressed. Like me, she was disappointed in the material, but that didn’t seem enough to dampen her strong enthusiasm. Hopefully, that will be your reaction as well.  Ms. Bayerdelle deserves to be seen (and, more importantly, heard). Her show? Well you can't get one without the other.
Posted by Samuel L. Leiter at 1:32 PM