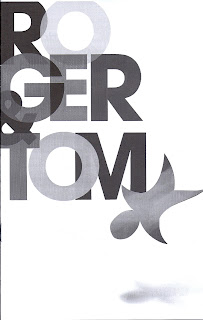 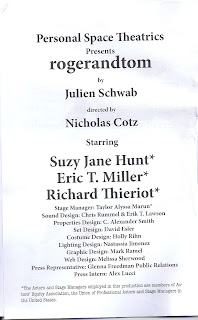 Try to pay attention to this unusual play’s setup: Penny (Suzy Jane Hunt) and Rich (Richard Theriot) are a young couple whose marriage is dissolving, and Rich has come to their apartment to pack up more of his stuff in the white boxes that litter the place. Soon, Rich and Penny are bickering. The apartment, ingeniously imagined by David Esler, and many of its principal features (like stoves and bathtubs), are depicted by outlining them on the floor in ground plan style, but there are also several simple pieces of furniture and even an actual toilet, sink, and fridge; everything is black, white, or gray. There are no actual walls but we can tell where they would be by the vertical strings running from floor to ceiling at significant corners. There is also a practical door. The audience is in two segments, sitting on either side of the apartment and facing both it and each other.  Penny is awaiting her brother, Roger (Eric T. Miller), who promised to come from upstate to see a play with her written by their brother, Tom, who has been estranged from Roger for five years, but she asks Rich not to let on about their marriage being on the rocks. She calls Roger and a cell phone ringing in the audience turns out to be Roger's, who has been sitting in the theatre (right behind me) under the impression that he has been watching a play written by Tom. He leaves his seat and walks onto the stage where he discovers that he’s a character in the play, and that, even though he and Tom actually have no sister, Penny insists that’s who she is, while Rich, who is an actor named William (played, of course, by Richard Theriot), serves to explicate the situation for Roger, who agrees with great hesitancy to enact himself with these made-up characters, so as to see where this is all leading in regard to his being there in the first place. Get it? 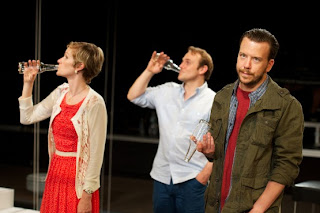 
ROGERANDTOM, Julien Schwab's exceedingly clever puzzle of a play, was first done by the same company (Personal Space Theatrics) in 2003, and now being revived at the Here Arts Center, is a surrealistic Pirandellian exercise in interrogating the reality-illusion divide of theatrical performance; as it progresses it gets only more imaginatively complex as it shatters the fourth wall into many pieces and reveals even to its characters that they can’t trust their own reality. Penny is totally committed to being the character she plays, since that’s precisely who she is, and she is devastated to discover that there’s an audience out there watching her (before this discovery she has even peed as if in the privacy of her bathroom) and that she can walk through walls. Rich is an actor-explicator with the ability to expressively and good-naturedly explain to the befuddled Roger what he’s going through, even showing him the script to demonstrate (as an audience member confirms) that everything they’re experiencing is already written down and that nothing is left to chance. Roger is supposedly a real blue-collar guy, who finds that he’s a character in a play designed to reconcile him with his brother, Tom, the playwright, who has written previous plays about him. He goes along, more or less, with playing at being this character while simultaneously undermining all the theatrical conventions that we normally take for granted in suspending our disbelief.


The three performers have the challenging task of making all this metatheatrical trickery real on multiple emotional and comical levels, without winking at the audience. It is to their great credit that they do this with consistent truth and honesty, although, here and there, one can detect minor actorly tics that threaten to but never do give away the game. Still, the performances are enormously helpful in making the mystifying developments seem perfectly natural within the world being portrayed, and for this director Nicholas Cotz deserves warm appreciation.


ROGERANDTOM’s plot developments grow increasingly complex but I find them less interesting for themselves than for the opportunities they provide to enhance the playwright’s dramaturgical conceit. This is one of the more novel Off-Broadway pieces on display at the moment, one that I might have enjoyed even more had the air conditioning been working. But perhaps the A/C in Penny and Rich's apartment had been turned off and I was simply sharing their reality. 0r maybe the A/C was blasting away in the apartment but, like the empty beer bottles the actors drank from or the unplugged-in phone they spoke on, I was supposed to imagine it was on. Or maybe . . .
Posted by Samuel L. Leiter at 1:12 PM