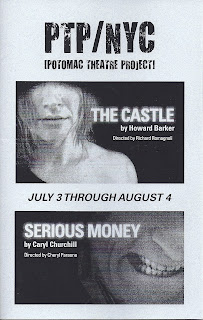 Why Howard Barker subtitles his 1985 play, THE CASTLE, “A Triumph,” is unclear to me, just as so much else in this sometimes fascinating but more often frustratingly obscure exercise in epic dramaturgy. The play is presently being produced by the Potomac Theatre Company (PTC) in repertory at Atlantic Stage II with Caryl Churchill’s SERIOUS MONEY, another British play with a very dark core. The PTC has had a close connection with the prolific Barker’s work since Richard Romagnoli, who staged the current production, directed THE CASTLE’s American premiere back in 1989, but this is its first New York staging. Barker, proponent of what he calls “Theatre of Catastrophe,” is a tough nut to crack and, while I was impressed with much of what I saw in this production, I found the experience ultimately unsatisfying.

THE CASTLE is set in 12th-century England and has a Shakespearean veneer in both structure and language, although you won’t find too many “shits,” “fucks,” and “cunts” in the Bard’s poetic lexicon. Some of this is funny, but it eventually becomes more like a dramatist’s tic, unrelieved, despite lots of sturm and drang, by enough human interest to make it consistently appealing. THE CASTLE is preoccupied with many serious themes, political, theological, and sexual, but Barker’s provocative manner is too obtrusive to allow for any serious identification with his characters and their dilemmas.

A band of knights has returned to their homeland after seven bloody years of fighting the infidels during the Crusades. Instead of their wives waiting faithfully for them, like Penelope in THE ODYSSEY, they find to their disgust that the women have established their own nonreligious, nonhierarchical new society in which sexual freedom runs rampant, and the women have multiple babies by multiple partners, including old men. Ann (Jennifer Van Dyck), wife of the men’s leader, Stucley (David Barlow), is now the lover and associate of Skinner (Jan Maxwell), a witch who seems to have the most power among the women. To counter this subversive world, Stucley, employing the genius of a stoic, dignified Arab, Krak (Quentin Mare), an engineer Stucley has brought back from the Holy Land, leads the men in the erection (pun intended) of a huge new, extremely well-fortified castle, meant to reestablish the male power structure; however, a revelation toward the end hints at the coming of gunpowder, which will make all such fortresses vulnerable, just as the arms race implies the ever increasing power of new weapons to overcome the old. This premise leads to various side issues, including the establishment of a new religion when Stucley points out the Bible’s failure to note the presence of Christ’s “cock,” suggesting the need for a theology in which Christ’s sexuality is preeminent.

Having read (or plodded through) the play before seeing it, I was surprised by the many levels that Romagnoli as director brings to it, and by the quite powerful performances of the leading players, whose intelligence and technical abilities are able to mine the verbally clotted lines for surprisingly clear motivations and transitions. Nevertheless, despite some truly strong actors and highly effective rhetorical moments, one never for a moment believes in the personal relationships among the characters; too much attention is paid to stylistic choices of presentation, including an abundance of direct address not indicated in the script. Even Brecht, for all his yada yada about the “alienation” or “estrangement” effect, sought fundamental reality in his characters’ interpersonal behavior.

Set designer Jon Craine has imagined an apparently inexpensive and innovative way to represent the multi-scened drama by hanging long, cotton sheets that represent pillars or whatever you wish them to be, and having them gradually yanked down, altering the visual perspective, as the action progresses. In act two, coils of barbed wire hang threateningly overhead. Excellent lighting by Hallie Zieselman is supplemented by terrific sound effects designed by Cormac Bluestone, including the roar of a jet flying over the audience near the finale. And Jule Emerson has contrived costumes many of which manage to suggest the 12th century yet with a few creative touches that allow them to allude to modern day garments making even the mirrored sunglasses worn by Stucley in his dictatorial mode look appropriate in the medieval context.

Of the actors, Jennifer Van Dyck as Ann has a richly theatrical voice and commanding presence that make you pay attention to her whenever she’s on stage, and David Barlow, although physically slighter than I imagined his character from the script, is continuously imaginative and interesting as Stucley.  Brent Langdon as Nailer, the priest, is highly expressive in his efforts to accommodate Stucley’s arguments as a way of reestablishing the church. The star turn belongs to Jan Maxwell in the highly demanding role of Skinner, and she demonstrates why she has won so many awards; unfortunately, even she is unable to sustain interest in her voluble and eccentric character; she is punished for killing someone by having to drag along his rotting corpse. Unfortunately, her many muddy lines in one long speech after another in act two become increasingly unintelligible, or, after nearly two and a half hours, simply too much trouble to bother about.
A few critics have accepted the title at face value. For me, though, THE CASTLE: A TRIUMPH is not.