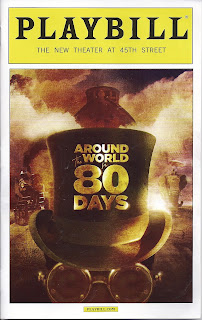 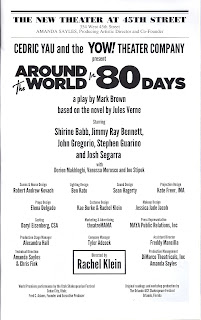 If you’re looking for something a little different Off Broadway, yet in the Broadway district, I’d advise you to get on board the speeding trains, boats, and elephant (well, speeding for a pachyderm) racing from London to Suez to Bombay to Calcutta to Hong Kong to Yokohama to San Francisco and across the USA on the way back to London in this charming revival of AROUND THE WORLD IN 80 DAYS. Mark Brown’s adaptation of Jules Verne’s 1873 novel about Phileas Fogg’s race to win a £20,000 wager by doing what the title says was first seen locally at the Irish Repertory Theatre in 2008; while I didn’t catch that version, a little research reveals that the new production, staged with terrific originality by Rachel Klein, is a totally different beast, although the original also was lauded for its creative staging and performances. 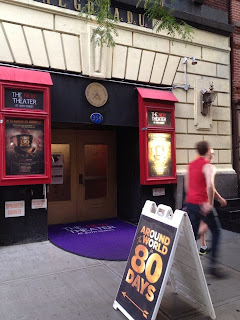 The New Theatre at 45th Street.


John Segarra, replacing Bryce Ryness, who left early in the run to star in Broadway’s upcoming FIRST DATE, plays the cool-as-ice, stiff-upper-lip Englishman, Phileas Fogg, who never meets a problem he can’t resolve by naming the right price, while an energetically versatile team of four others portray multiple roles, the most protean being Jimmy Ray Bennett in 16 parts. Each of the others has a principal role in addition to smaller ones, with the acrobatic John Gregorio concentrating on Passepartout, Fogg’s French valet; the determined Steven Guarino on Detective Fix, following Fogg on his journey because he suspects him of a bank robbery; and the physically striking Shirine Babb on the Indian princess, Aouda, who provides the romantic interest. Everyone is called on to use multiple accents, especially high British ones, and they are all required to go through complexly choreographed theatrical high jinks with perfect timing.


The New Theatre on 45th Street, a depressing hole in the wall when I visited it last season, has been transformed into a remarkably eye-catching space in which there is not only a wonderfully realized, two-level stage set (by Robert Kovach), with compasses, ropes, steering wheels, staircases, doors, and windows, but also delightfully painted side walls that surround the audience with the gears, steam pipes, tubes, and other paraphernalia of a 19th-century English factory. The theatre’s seats have been attractively reupholstered to match the décor, and a 6.1 surround sound system has been installed to totally immerse the audience in the unique sound effects created by Sean Hagerty. Whereas photos of the 2008 production show the actors wearing authentic-looking clothes from the 1870s, designer Kae Burke and director Klein have gone a step further in this production, giving the period costumes numerous theatrical flourishes that say both when the play is taking place and that nothing should be taken seriously. I especially liked Passepartout’s toque and matching jacket, whose lozenge-like pattern reminded me of Arlecchino from the commedia dell’arte.


Of particular note in this mélange of cartoonish inventiveness is a huge clock overhead at stage left, on which an animated Victorian clock face is used not only to tell the passage of time but to serve as the screen for Kate Freer’s inspired projections that map the journey of Fogg as he circumnavigates the globe. And, pulling it all together, is the awesomely adaptable lighting of Ben Kato.


This is the kind of show that allows the director to pull no punches in displaying her ingenuity, using minimal props to suggest multiple ideas, such as the dryer hose that represents an elephant’s trunk, or the revolving parasols that evoke a train’s spinning wheels. The action, which combines both narration and dialogue, is almost entirely at breakneck speed, and the actors must not only move like the wind, but practically dance their characters and speak clearly while shooting out their words like machine gun bullets.

Some, like me, may find the relentless pace a tad overwhelming and hope for some reprieve, but they will be disappointed because the only opportunity to relax comes with the intermission. I suspect that the breathless staging may have made the fun less funny for me than it was for others, but the rest of the audience seemed to be having a terrific time, so why bother quibbling?


There’s a lot to like here, and young audiences especially should get a kick out of this tour de force. I don’t know how long it’s going to run, but, if I were you, I wouldn’t wait 80 days to see it.
Posted by Samuel L. Leiter at 12:19 PM